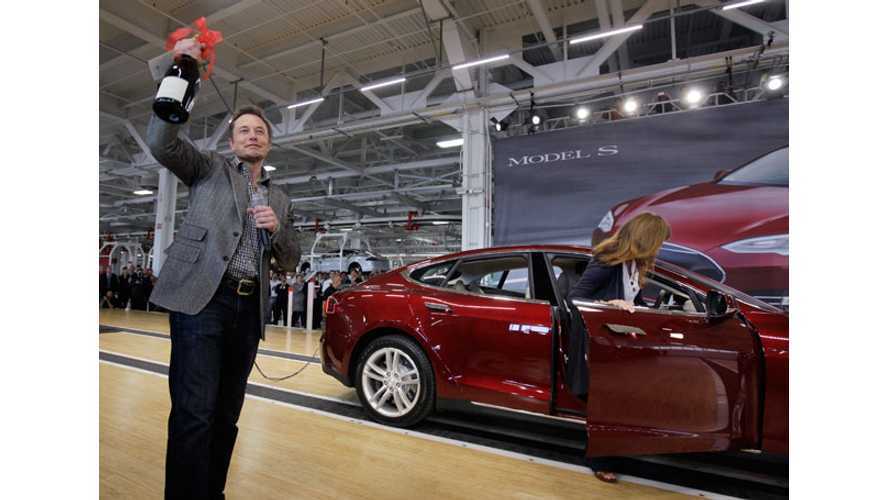 Tesla Motors has indeed come a long way.  They were the first to kindle the fire of the EV revolution with the handmade low volume Roadster first built in 2006.  Those efforts inspired all the automakers to build EVs.

Under the leadership of serial entrepreneur, PayPal and Space-X founder Elon Musk the company was brought public, given hundreds of millions in government subsidies, established a partnership with Toyota and opened its very own mass production plant in California.

Earlier this month we learned that the company is losing money during its ramp up phase, but Musk told investors he is confident that 2500-3000 Model S's will be delivered in the fourth quarter as the assembly rate increases to 400 units per week by December.  He also said Tesla would be able to deliver more than 20,000 Model S'2 in 2013.  So far about 1000 units of the sleek flagship have been delivered.

Tesla's Toyota partnership has birthed the production of the RAV-4 EV and the company has announced an upcoming model X crossover.  But are there future plans as well?

In Musk's recent investment call he made the following statement:

There are a few other variants of the Model S that we'll come out with next year that I think are going to be pretty exciting, in addition to, of course, really getting into the Model X and starting the initial design work of the 3rd generation mass market vehicle.

The third generation mass market vehicle will be crucial for the company to thrive and grow as at $49,900 the Model S is out of reach for most households.

But what of these Model S variants?  Could we see a convertible, a coupe, or a range extender?

I certainly wouldn't expect a range extender.  This is among what Musk told me when I asked him about the idea:

We looked closely at a range extender architecture for Model S. It ends up costing about the same in vehicle unit cost, a lot more in R&D and a lot more in servicing. Also, although performance is ok when both battery and engine are active at the same time, it turns really bad when the battery runs out and an undersized engine is carrying all the dead weight of the pack. Essentially, a REV is neither fish nor fowl and ends up being worse (in our opinion) than either a gasoline or pure electric vehicle...

So I asked Musk what the Model S variants be.  These days his answers are a little shorter, since the SEC and investors are watching:

"We will have some exciting announcements next year," he said.  "But nothing to talk about now."