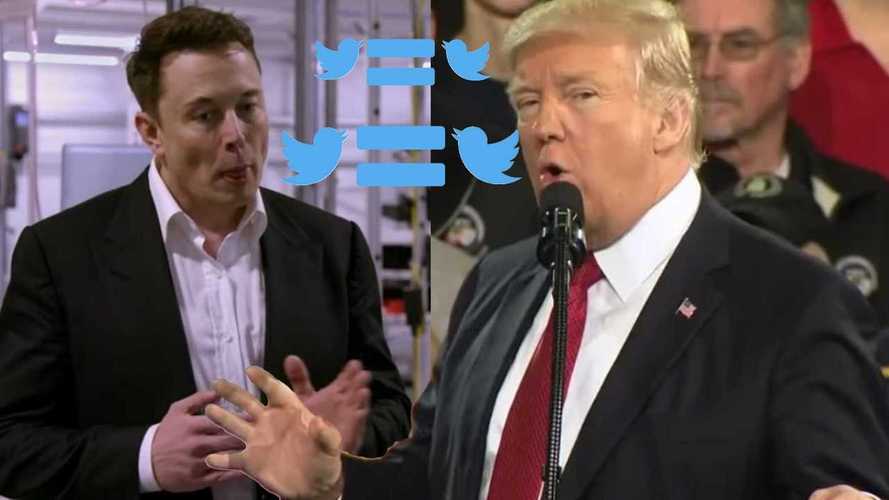 If one downplayed the novel coronavirus and hoped chloroquine works against it, the other did the same.

Consistency is probably the most underrated quality in the modern world. Many either do not know it or choose to ignore it. Take the COVID-19 outbreak as an example. If a celebrity some people admire downplays the novel coronavirus, that becomes defensible. If someone they hate does the same, it deserves prompt condemnation. Elon Musk and Donald Trump are the best examples of that: both allegedly downplayed the outbreak and hoped chloroquine is an effective way to fight it. In other words – and concerning COVID-19 – these men have more in common than most of their supporters would be willing to admit.

The Verge wrote that Twitter pledged to combat "fraud and misinformation" on the novel coronavirus. Yet, the social media platform would have failed to delete one from Musk – this one:

Children are not immune. They may contract the virus as much as anybody else. What happens is that most are not under the same odds elderly and sick people are, as CDC.gov warns. The Johns Hopkins Medicine website also states that symptoms seem "to be much milder in babies and children." What does not equate to saying they are "essentially immune." A Vox article shows many ended up in hospitals that luckily had the means to take care of them. What if these hospitals didn't? Lockdown orders are due to that terrifying possibility.

Musk then tweeted this:

It implies he believes some people that were never exposed to the virus simply did not contract the disease because “most people are simply naturally immune.” The logical conclusion that allows anyone to take is that you can count on that natural immunity and live life as usual.

Another example Musk may have downplayed the disease relates to Italy. The Tesla CEO believes the country possibly exaggerated its numbers due to testing failures.

Perhaps he should have a chat with Giorgio Gori, the mayor of Bergamo, in Italy, who believes the numbers are probably much higher. Watch the video below.

According to it and the article from Euronews, 400 people died in Bergamo on the week that went from March 14 to March 21, or four times the number of people that died a year ago. Most of these deaths were caused by pneumonia. Most of them could have emerged from COVID-19 infection but were not reported as such because these people died at home and were not tested.

In an article published by Reuters on March 18, Gori gives more detail on that: 164 people died in Bergamo in the first two weeks of March. Last year, the number was 56, or almost ⅓ of current deaths. Only 31 of the 164 were attributed to the novel coronavirus.

Adding these 31 to the cases from last year, we would have 87 deaths, leaving the 77 additional ones credited solely to pneumonia. In other words, the situation there is probably right the opposite of what Musk believes: underreported instead of filled with false positives. If Gori is correct – and he probably is – the situation is worse than official numbers can tell.

What if other illnesses do not get treated because hospitals and health workers cannot deal with the amount of people in critical conditions due to COVID-19? In what sense is this different than this?

With 46,450 confirmed COVID-19 cases in the US, Trump is being accused of having downplayed the outbreak. When he tweeted that, the US had 607 confirmed cases. Even Fox News, regarded as mostly favorable to the US president, wrote about that.

This video shows ten times in which the president allegedly downplayed the outbreak.

If Trump is wrong, Musk also is, as this Twitter user pointed out:

If you check the news now, you’ll see Donald Trump is being blamed for talking about chloroquine, like he has done in the tweet below:

Trump “talked about the potential benefits of chloroquine” on March 20. Check what Musk tweeted on March 16.

He also said this on the same day.

If any Musk follower died from chloroquine poisoning, is that his fault? When you check the press conference, you can see what Trump said:

Whether you like him or not, try to listen to what he concretely says. All we heard was he had “a good feeling” about chloroquine and that “it may work or may not work.” Elon Musk suggested it is a promising possibility a lot earlier. We have seen neither him nor Trump saying people should self-medicate.

Again, if Trump is wrong, Musk also is. Both have large followings. If it is irresponsible for one to say a drug is promising, why is it okay for the other one to do the same thing?

What the world has shown is that nobody knows how to deal with COVID-19 effectively and still allow small businesses and the economy to survive. Current lockdown orders are considered by many to be similar to killing the patient to end the illness.

The other extreme is even more concerning: If life goes as if nothing happened, many will get sick because this is highly contagious. Even if a small percentage of all those people gets really bad, they will be too many. There will not be enough ventilators, which automakers now propose to build or buy and donate. What about doctors, nurses, physiotherapists, and other health workers that are crucial to take care of everyone? They are already lacking.

If they get sick, and some will – things will get even worse. That is not something a doctor has to explain: simple math and geometric progression already do. Compare the numbers in the US on March 18 and on March 24: barely a week of difference.

Larry Brilliant is an epidemiologist that helped beat smallpox in all the world in a WHO. His recommendation in a Wired article is that we test, test, and test for COVID-19 as much as possible. That would be the only way to know where it is spreading, and restrict the infection until we have a vaccine or medicine that allows us to live with the virus around.

While we do not know precisely what to do, perhaps we should leave comments, tweets, and opinions for brilliant people – pun intended. If Trump is to let these guys work, Musk also is. If the Tesla CEO is entitled to an opinion, why isn't the POTUS? As long as it does not affect fighting the COVID-19 spread, that's their business. So far, we have seen it does.

Despite having 10,000 employees in Fremont – located in one of the most affected states in the US – Tesla did not follow the Alameda County lockdown order on March 16. It only stopped production at the end of March 23.

Despite knowing how severe the pandemic can be in the US, Trump refuses to impose a country lockdown. In Geneva, WHO spokeswoman Margaret Harris said the US could become the new epicenter of COVID-19. Over 24 hours, 40 percent of new cases were there. All other European countries respond for 45 percent, and the 15 percent left comes from different places, according to Reuters.

Consistency requires the people that condemn one for poking his nose in something he does not fully understand to treat the other likewise. As much as people on both ends of this horseshoe hate that, the theory has it that they are closer than they can acknowledge. Reality only confirms that.