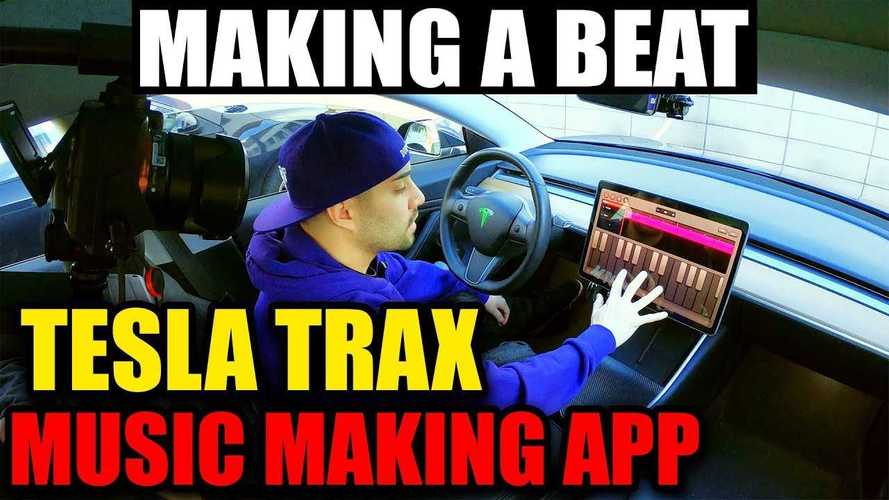 No worries, the Model 3 is parked while he works his magic.

Tesla continues to update the software in its cars with novel features. A recent software update included Tesla's TRAX — a digital audio workstation (DAW) that allows owners to produce beats all in the comfort of their own car. If you're looking to kill some time while Supercharging, TRAX could be a cool thing to try out in your Tesla.

To showcase the new feature, music producer 'The Hyphenate' in collaboration with Tesla Club-SoCal made a video where he goes through some of the TRAX software and produces a workable beat in a few minutes. Then, he adds some lyrics on top in order to complete the track.

Above: 'The Hyphenate' shows off his Not-a-Flamethrower from Elon Musk's Boring Company (Image: The Hyphenate)

The Hyphenate acknowledges that TRAX is still fairly limited — especially when you compare it to other DAWs like FL Studio or Ableton. However, just the act of having this kind of software in your car is a bit ludicrous. Making beats in your car? Who inspired this? Might it have been Elon Musk's girlfriend, Grimes? Believe it or not, Grammy winner Jack White already uses his Tesla to record music.

Above: Music producer 'The Hyphenate' makes a hip hop beat using Tesla TRAX in a Model 3 (YouTube: The Hyphenate)

There's another possibility too. Earlier this year, The Hyphenate released a video where he produced a beat (on his laptop) inside a Tesla. Perhaps someone at Tesla saw the video and got inspired? Regardless, Tesla continues to create the ultimate mobile man cave which now also includes a music studio complete with surround sound speakers.

Marty Morrise, the President and Co-Founder of Tesla Club-SoCal, who made this video in collaboration with The Hyphenate explains, "When there’s anything that has to do with music, The Hyphenate is the guy we go to... he explains how to use TRAX [which] is a huge help to many of us Tesla drivers wanting to learn and play with the app. The Hyphenate also tweeted Elon Musk and volunteered his services to help make the next version of TRAX even better."

This isn't the first time that Morrise contributed to the Tesla world with some sort of music-related project. Over a year ago, along with The Hyphenate and some members of Tesla Club-SoCal, she starred in a music video specifically about the electric vehicle brand. According to Morrise, the clip included the most Teslas that have ever appeared in a single music video.

Above: Marty Morrise and The Hyphenate surrounded by an all-electric fleet of Teslas (Facebook: Tesla Club-SoCal)

In any event, if you're in the SoCal area and want to join the club, visit Morrise's site at TeslaVibez. For those wanting to check out more of The Hyphenate, be sure to check him out on Instagram.