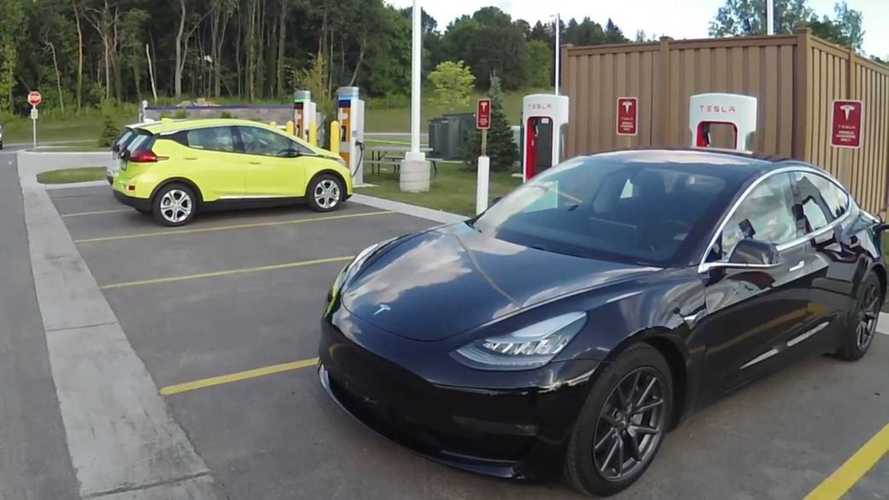 Any time a new technology starts to spread, it takes some time for a set of rules for proper etiquette to develop (we’re still waiting for this to happen with mobile phones). In some parts of the world, the availability of public charging has not kept up with the growing number of EVs on the roads, leading to frayed tempers and unpleasant scenes at some of the most crowded charging stations.

What Are The Best Ways To Promote EV Charging Infrastructure Growth?

Everything You Need To Know About Charging A Tesla

Sasha Lekach, writing in Mashable, tells of some tense times on a recent visit to a Marin County Supercharger. As she charged, a line of Tesla vehicles piled up, at one point reaching five deep, but things remained orderly and polite (perhaps partially due to Tesla’s 50-cent-per-minute extra fee for lingering after charging is finished, which is doubled when a station is full).

Next door, at a row of EVgo fast chargers, it was a different story - the driver of a Nissan LEAF got into it with a BMW i3 owner, because the latter had unplugged him, seeing that the LEAF was at 97 percent charge. Was this acceptable behavior? The LEAF driver thought not, and angry words were flung.

Various charging providers and advocacy groups, including ChargePoint, PluginCars, EVgo and SemaConnect, have published guides to general charging etiquette. Norwegian Tesla enthusiast Bjørn Nyland came up with a list of 10 points of etiquette specifically for Supercharger users. Everyone seems to agree on the basics, although there are a couple of minor points that are open for debate.

The most important rule of etiquette should be self-evident, but apparently it isn’t. Charging spaces are for charging, not rewards for being a cool EV driver. Never, ever park your EV in a charging space if you aren’t charging.

Another rule everyone seems to agree on: charge, then move on. If you’re away from your vehicle, keep track of your charging session on your mobile app, and once you’ve topped up to 95% or so, move your car and open up the space for somebody else. Don’t insist on charging to 100%, as the clueless LEAF driver in Marin County did. Chargers slow their charging rates as they approach 100%, so squeezing out that last 3% could take another half hour.

Is it ever okay to unplug someone else’s vehicle? Some say no, but I say it’s alright to do so if you can tell that the other EV is finished charging. Some drivers leave notes for others to let them know whether it’s okay to unplug. Some owners use handy little cards that let other EVers know whether you are “opportunity charging” (simply topping up) or “necessity charging” (meaning that you need to charge to get to your destination).

Above: Ummm, no. (Image: Teslarati)

Many charging networks allow you to share information with other EV drivers by posting reviews of particular charging stations online. Do so, especially if a charger is out of order, or there is some other situation that other drivers need to be aware of.

Leave the charger as you’d like to find it. Roll up the cable and stow it properly.

Is it okay for Tesla drivers to use shared networks? After all, we have our own Supercharger network that others can’t use, so are we being greedy when we use a non-Tesla station? Some say yes, some say no. I say it depends on whether there’s a Supercharger nearby, whether you really need to charge, etc.

Another etiquette issue that’s specific to Tesla drivers: Is it okay to use Superchargers for daily charging needs, as opposed to using them for the road trips for which they were designed? Tesla has discouraged this in the past - in 2015, Elon Musk mentioned the possibility of sending “friendly reminders” to suspected freeloaders (we’re not aware of anyone who ever received one). This was probably more of an issue back then, when most Tesla owners had free Supercharging privileges. Another thing to consider is that many urban dwellers don’t have the option of installing home charging stations, and the EV industry is struggling with the issue of how to provide charging options for these folks. My call: If you’re paying for Supercharging, you have the right to charge whenever you like. However, if you have access to charging at home or at work, it’s uncool to use free Supercharging as your daily energy source, at least if others are waiting to charge.

However tempting it may be, don’t leave nasty notes for ICE drivers. Yes, ICEing (intentional or unintentional blocking of charging spaces by dinosaur drivers) is extremely rude - almost as bad as unauthorized parking in a handicapped space. But remember that EVs are a new and unfamiliar sight for most drivers. Many are unaware that it’s not okay to park there. And it’s only fair to point out that, in some parts of the country, there are chargers in prime parking spots that are seldom or never used. Leave a note if you wish, but make it polite and reasonable, and you might just educate someone.

In more electrified countries such as the Netherlands, signs at public chargers make it clear that ICE vehicles that encroach on EV parking spots will be towed. Unfortunately, in many parts of the US, while there may be “electric vehicles only” signs, there’s no penalty for violations.

Above: Some advice for EV charging etiquette (YouTube: Tycobur)

The ultimate in uncouth behavior is what some call ICE-holing - the intentional blocking of Tesla Superchargers or other public chargers by ICE drivers. Some haters, driving “bully trucks,” have engaged in very juvenile behavior indeed, chanting “Tesla sucks!” and so on. Very brave Model X drivers might attempt De-ICEing - towing the offending truck out of the way (as one owner demonstrated in a video, it’s perfectly possible), but we don’t recommend this - it’s not worth risking a confrontation. Console yourself with the knowledge that the days of gas-burning vehicles are numbered - the day may come when ICE drivers get mad at us for blocking the last gas pump in town.