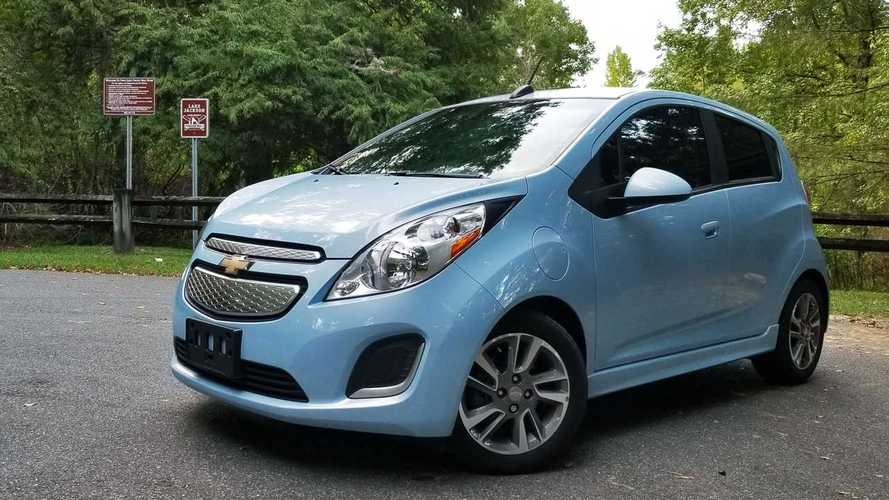 It's a traffic assassin.

Chirp! Shugga shugga. The front tires of my Chevy Spark EV protested as they dug at the asphalt. The steering wheel transmitting their barely fruitful search for grip, tugging left and right. The torque steer was real as my little jellybean of a car jumped from 35 miles per hour to 45 in a couple of exciting blinks of an eye on the otherwise empty night street.

Other "What do I drive" stories:

The Bridgestone Ecopia low rolling resistance rubber on my recently-purchased car are hardly the stickiest tires to ever arrive from planet Vulcan, and dealing with excessive applications 327 lb-ft of torque put out by the 140-horsepower motor exposes their inherent weakness. It's a compromise, I'm willing to shoulder, though, as they help the car eke out its 82 miles of EPA-rated range from its relatively tiny 18.4-kWh battery.

Now, faithful readers may be somewhat confused. It was just a few weeks ago that I confessed that my personal vehicle was not only not electric (or even a hybrid, for God's sake), but a pickup truck: a 1988 Ford Ranger STX. As I penned that piece, I had, actually, just taken delivery of this 2015 Electric Blue Spark EV LT2. But, in the spirit of transparency, I still needed to tell you about the truck.

I've been wanting the join the electric vehicles owners club for over a decade, but circumstances and finances had prevented that. The need and ability to make the leap finally occurred this summer and I spent about a month looking at available battery-powered cars. Leveraging the power of the InsideEVs Forum, I looked at a Nissan LEAF, a BMW i3, and this Spark EV. I even went head-to-head with a local dealership in a lost effort to get a Chevrolet Bolt for $25,000 (I could only get them down to $29K.)  In the end, it came down to either a Fiat 500e or this one, which I spotted on MYEV.com.

I ended up making my decision based on price and perceived reliability. With just over 9,000 miles on the odometer, the seller was willing to part with the car for a mere $9,000. Being a 2015, the drivetrain is still under warranty and I have some amount of confidence in GM's ability to get the important engineering parts right. While the basic vehicle itself is no great shakes, the battery boasts liquid cooling and the Detroit automaker has a decent record with its other, more famous, electrified product: the Volt plug-in hybrid.

Since I took delivery of the car — I had it picked up from the Orlando, Florida area by a vehicle transport service — I've put over 1,000 enjoyable miles on it. The experience has been a revelation.

I've discovered the cargo space in the back of the hatch can barely handle my weekly grocery haul. The suspension is poor at isolating passengers from any imperfections in the pavement. The stereo gives up at a relatively low volume if you enjoy cranking up the Caliente channel on the Sirius XM radio, turning low-frequency bass notes into buzzy farts.

On the other hand, it is extraordinary in traffic. Its small size allows it to slip easily into minute gaps in the rush-hour stream of 9-to5ers. Its unassuming looks, matched with a 7.2-second 0-to-60 performance, allows it to take first place at the traffic light Gran Prix every time. Though it does suffer from torque steer, its low center of gravity helps it handle like a go-kart, egging you on to take an extra lap of that traffic circle. Fueling takes 5 seconds when I pull into the garage and plug in the portable EVSE that came with the car. I have it plugged into a very modest 8-amp, 110-volt circuit, but it manages to give me all the juice I need to cover the 40-or-so miles I drive daily.

My favorite thing about driving my new-to-me Chevy Spark EV is the peace of mind I get knowing I'm not leaving a trail of unhealthy emissions behind me, polluting every neighborhood I drive through. It's something that's been normalized for far too long, and I'm happy to now be a part of a changing tide that will lead to a better, healthier future.