2021 Toyota Mirai Test Drive Review: Is Hydrogen Right For you? 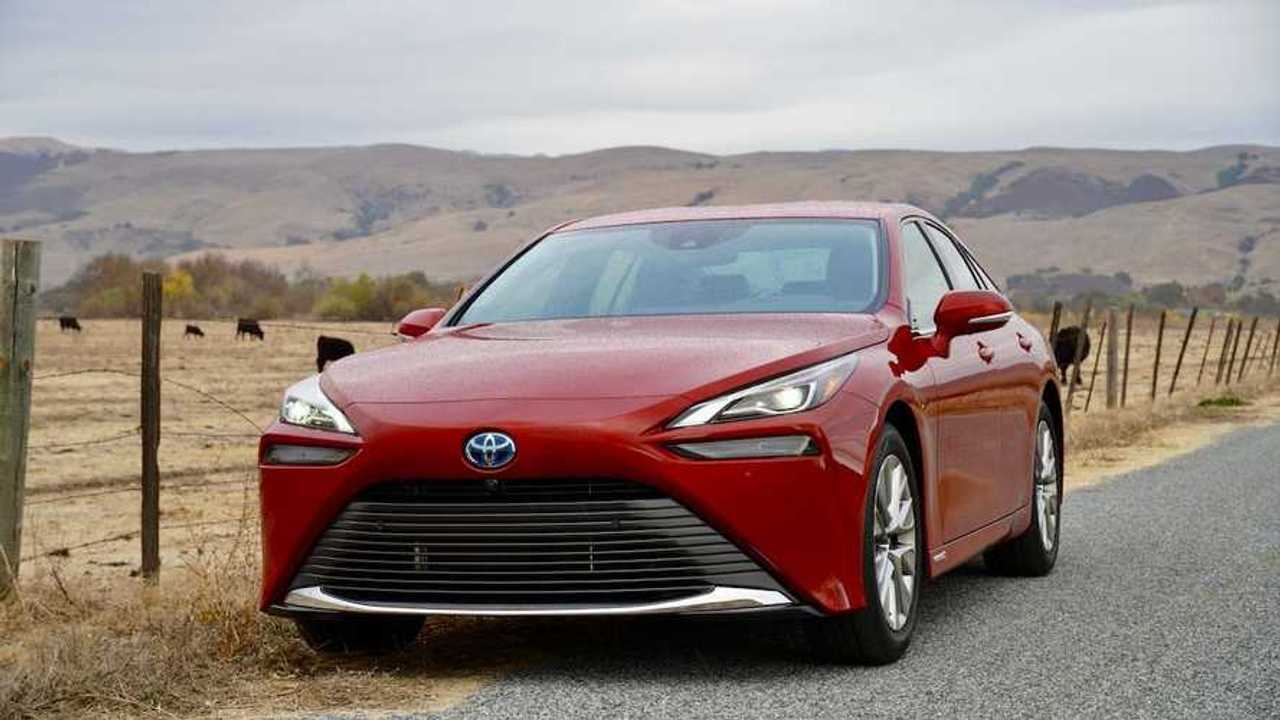 Is hydrogen the future of motoring?

Toyota is one of the earliest pioneers of electrified vehicles with the introduction of the Prius hybrid electric vehicle (HEVs) in 1997 and has sold over 15 million vehicles since. Toyota’s popularization of electric propulsion 23 years ago jumpstarted the advances in today’s electric vehicles worldwide.

HEVs have remained at the core of the company's current efforts, but over the years, Toyota has also been developing a multi-powertrain strategy that includes different electrified technologies including hybrids and plug-ins (PHEV), fuel cell (FCEV) and an upcoming range of battery electric (BEV) vehicles.

Toyota has been involved in FCEV research and development for over 25 years. They are one of the first manufacturers to offer a mass-produced, mid-sized hydrogen fuel cell vehicle (FCV) with the limited introduction of the 1st generation Mirai in 2015. Since then there have been approximately 11,000 Toyota FCVs sold world-wide.

The first generation Mirai FCV was best described as a unique, reliable, but quirky-looking car, and now the second-generation car refines and updates its technology and styling in every way.

While the original Mirai had the style of a futuristic anime Prius, the 2021 Mirai, has the look of a premium-class flagship vehicle. In fact, it’s built on the same RWD GS-L platform as the larger Lexus LS sedan. This reboot gives more interior space, a longer wheelbase, and allows for the complete repackaging of the Fuel Cell drivetrain and larger hydrogen fuel storage.

EPA range for the new Mirai is up 30 percent to 402 miles in the XLE trim. The Fuel Stack is also redesigned with more efficiency in mind, and now resides in the front of the vehicle rather than under the rear seat with the first-generation car. The electric motor now drives the rear wheel, and the extra space under the vehicle allows for three carbon-fiber hydrogen storage tanks.

The entire body is lower, longer and wider with an aggressive stance, and combined with four-wheel independent suspension provides an incredibly solid ride with amazing handling, which gives a very comfortable “limousine” ride just like the Lexus LS. Now with seating for five, the interior matches the quality of the exterior.

The new exterior conveys the look of a long-distance Grand Touring car but with the usefulness of a four-door sedan.

The new Mirai body is bigger in every dimension from the outgoing car:

Seating is now 5, up from 4 passengers, and weight distribution is now 50:50, which greatly contributes to the solid neutral handling.

One way of comparing a Fuel Cell Electric Vehicle (FCEV) to a Battery Electric Vehicle (BEV) is that an FCEV makes its own electricity from hydrogen on the fly, while a BEV relies on its electricity to be made on the grid and then stored in batteries in the vehicle for use. Both use electric motors for propulsion with electricity, and both are zero-emission vehicles.
The only byproduct of the electric generation in an FCEV is pure water that drops out of the vehicle via a vent pipe. A new smaller and lighter 1.24 kWh lithium-ion battery, is onboard the Mirai to store excess electricity generated by the fuel cell stack or recovered via regeneration. This buffer battery sits above the motor on the rear axle and provides immediate oomph when needed.

The second-generation Mirai Fuel Cell is about 20 percent smaller and 50 percent lighter than the one it replaces, but still generates 650v. The power output of the fuel cell stack is 128 kW and can cold-start at temperatures down to -22˚F (-30˚C).

The single AC synchronous electric motor/generator is rated at 182 hp (134 kW) max with 221 lb. ft. of torque, and drives the rear wheels.

The Mirai’s hydrogen is stored in three 10,000 psi, carbon-fiber-reinforced tanks. One is mounted longitudinally up the center of the car and the other two are on either side of the rear motor and suspension. The total capacity of the three tanks is 37.5 gallons (142 L) or 11 pounds (4.9 kg).

The new cabin accommodations have taken a page from the Lexus playbook, with a pleasing look with all of the controls easy to see and use.

Most of the dashboard, center console and seats are covered in SofTex synthetic leather-trimmed in copper-color or satin-chrome metal.

Toyota’s driver and multi-media instrument layout continues to improve with a well-thought-out combination of touch-screen and buttons. No more drilling down three levels of menus to find the seat heater controls.

There are two TFT LCD displays, an 8-inch digital gauge cluster, and a 12.3-inch multimedia/information display. All of the typical sources are available including Amazon Alexa, Apple CarPlay and Android Auto. A 14-speaker sound system from JBL, including subwoofer, provides a great concert hall sound. The cabin is extremely quiet with our sound measurement returning only 57dB at 70 mph with just a bit of wind noise making it into the cabin. If that is still too noisy, the top-line Limited trim adds noise-canceling active sound control.

A first glance of the exterior shows styling clues from both the Lexus LS and the Toyota Avalon. But what you don’t see initially is the great amount of aerodynamic tuning that Toyota has invested in the Mirai. Everything from the height of the car to the shaping of the wheel wells is optimized for airflow. The bottom of the Mirai is completely flat and there are aero stabilizing fins at the front edge of the side windows. All-in-all this lets this 2.2-ton vehicle achieve a super low- 0.29 coefficient of drag.

How Does it Drive?

Driving the Mirai is like driving a hybrid or BEV. Get in, buckle up, turn it on, shift into D and off you go. Normal initial acceleration uses the onboard battery, and then the car transitions seamlessly into a combination fuel cell and battery mode and then to full fuel cell power to the EV drivetrain when cruising.

There aren’t any synthetic motor sounds as a distraction, and even though the Mirai that we tested was a pre-production prototype, the body rigidity and quietness was amazing. In a blind test, passengers were asked to guess at what speed the car was traveling, and most couldn’t determine if the car was going 25, 60, 85 or 105 mph. The combination of a great chassis setup, with a silent drivetrain, and a tight body gives the Mirai a world-class luxury feel.

The new Mirai doesn’t have performance EV acceleration, only managing to achieve a 0-60 time of 8.5-9.0 seconds, but it’s a cruiser, not a sprinter.

The Mirai has three drive modes, ECO for range, SPORT for acceleration and handling enhancement, and NORMAL that optimizes between performance and efficiency. Sport settings on other vehicles usually tighten up the suspension that can make sport a harsh ride, but on the Mirai, it tightened up the suspension and steering, yet it was still mannered and comfortable. SPORT was our favorite mode. The Mirai also watches how it is driven, and optimizes the charging and discharging of the battery to optimize economy and range. The Mirai also comes with Active Cornering Assist that uses the stability control system to reduce understeer in certain driving situations, and Hill Holder allows for smooth starts from stop on hills.

The Delivery, Handling and Processing is $955

Options are few, with just an Advanced Tech Package that consists of a Bird’s Eye View with perimeter scan, front and rear parking assist for $1410 for the XLE, and 20-inch super chrome alloy wheels for the Limited trim at $1120. Some paint colors for both trims are special and are $425 more.

Our XLE Mirai included special Supersonic Red paint and the Advanced Tech Package for a total of $52290 delivered.

The Mirai is available as a lease of around $499 for the XLE, and $549 for the Limited. Toyota also expects to offer special finance rates, retail cashback, and launch cashback as well.

The Mirai comes with a $15000 credit/ 3-year credit for the purchase of hydrogen, and the use of a Toyota rental to use in place of your FCEV if you travel into areas that do not have hydrogen refueling, if necessary.

There are federal incentives up to $8000 for fuel cell vehicles that will be expiring at the end of 2020. While it is not finalized, expect the new administration to reinstate these incentives for FCEVs in 2021.

The Mirai also qualifies for an available $5000 rebate and single driver car-pool stickers in California.

Because of all of these incentives, the effective purchase price of a Mirai could be as little as $36500 not including any Toyota incentives. Clearly, Toyota wants to lower the entry price on this FCEV.

But despite all of these incentives, the new Mirai will only be offered in two locations in California, the greater Los Angeles Area, and the San Francisco Bay Area, and Toyota is projecting to have only 3250 examples available in 2021. The 2021 Mirai will truly be a unique vehicle.

This might have something to do with the fact that there are only 43 hydrogen filling stations for all of California (with 21 more coming online in 2021), and about half are offline on any given day. Clearly refueling infrastructure are the FCEVs biggest practical shortcoming.

Is the Mirai FCEV right for you?

If you don’t live in San Francisco or Los Angeles, probably not. But even if you do live in these areas, the reliability and availability of hydrogen refueling is an issue. The Fuel Cell detractors will be quick to comment how Hydrogen is the devil incarnate, because hydrogen is just one step away from using evil hydrocarbons, and that the current cost and availability is totally impractical. That may be today but these objections are based on solvable issues of scale that impact cost and availability.

Toyota realizes the challenges short-term for FCEVs, but they also see opportunities where FCEVs are better than BEVs especially addressing BEVs greatest shortcomings, range and recharging speed. FCEVs can achieve a range of 400 miles or more today at half the cost of a BEV and at almost cost parity for a similar ICE vehicle. They can also be refueled to 100 percent in 5 minutes (assuming a working hydrogen filling station is available where you need it).

Even though BEVs are more energy-efficient than a FCEV, and even more efficient than an ICE, that doesn’t seem to move the needle for BEVs, but an FCEV’s range, and quick refueling may be an incentive for ICE owners that are considering an EV, if they live in an area where they can purchase or lease one.

Toyota has found other transportation usages that are optimized for Hydrogen fuel cells, like short-haul trucking, Public transportation like urban buses, stationary power generation, and of course, long-range passenger cars like the Mirai. They have even investigated home hydrogen filling stations that use the natural gas we use for heating to create hydrogen.

But this is clear: Toyota is not in FCEVs as a hobby, they in for the long haul to provide an option for replacing ICE vehicles along with HEVs, BEVs, and PHEVs. Their current offering is a real triumph of engineering with a car that is a true benchmark for luxury automobiles that are also Zero Emission Vehicles.