In the last month of the year, BYD once again set a new monthly sales record of plug-in electric cars (10th consecutive and 11th in 2022). The Chinese manufacturer continued to expand its sales volume, despite many challenges related to a quickly growing number of COVID infections in China and some lost production.

The overwhelming majority of BYD sales are in China, while exports stand for a few percent of the total result.

Both all-electric and plug-in hybrid car sales have been above 100,000 units per month since October.

Out of the total number, some 11,320 BYD plug-ins were exported. Besides passenger cars, BYD sold 599 commercial electric vehicles for a total of 235,197 plug-in vehicles last month.

In 2022, BYD sold more than 1.85 million plug-in electric cars, more than tripling its 2021 result of 593,745. This makes the company the world's largest manufacturer of rechargeable cars, although, in the case of all-electric cars, Tesla still has a significant edge (over 1.3 million deliveries). 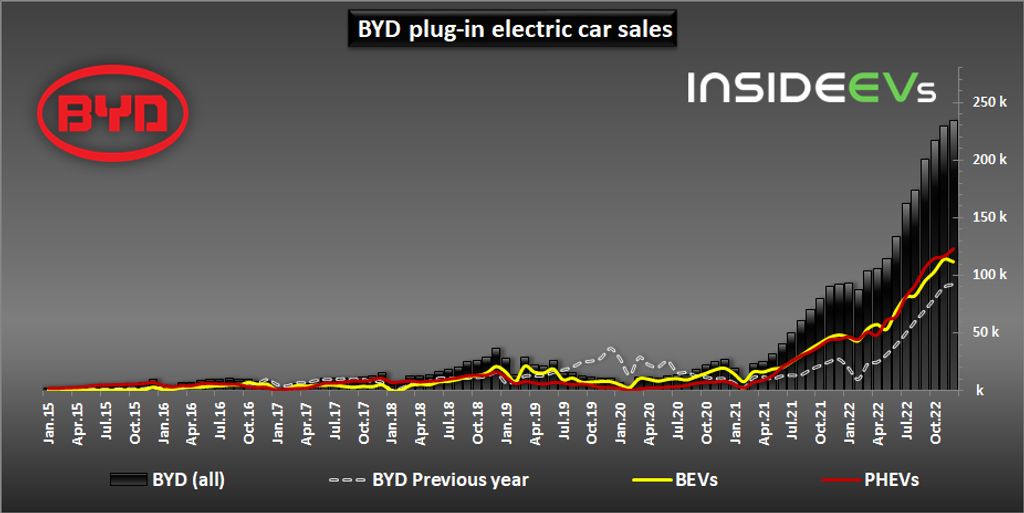 There is one new model on the list - the BYD Frigate 07 plug-in hybrid - with 1,805 units in the first month on the market.

It's difficult to forecast anything in today's world, but January-February might bring some serious slowdowns for BYD in China - partially it's normal due to local holidays, while partially it might be related to COVID or other factors.

There were media reports (Automotive News) that BYD will increase prices a bit in January 2023 - between 2,000 to 6,000 yuan ($290-$868), depending on the model, because of the end of government subsidies. It might slightly affect the demand side of the market.

Overall, BYD appears to be on the rise with many projects - new models, or even brands, as well as geographical expansion (in Europe and multiple other countries around the world) - that we are cautiously optimistic about for future growth.