US: In 2021, Plug-Ins Traveled 19 Billion Miles On Electricity

Billions of dollars in fuel costs were already saved since 2010 and counting.

Plug-in electric cars are gradually increasing their market share in the US (reaching about 4% in 2021), which starts to make an impact.

The Department of Energy (DOE)’s Vehicle Technologies Office highlights in its latest weekly report that in 2021, plug-ins traveled some 19.1 billion miles (31 billion km) on electricity - all miles traveled in BEVs and the EV mode portion of miles traveled in PHEVs.

This estimated distance of 19 billion miles is noticeably higher than in 2020 (nearly 13 billion miles), which indicates how quickly the electrification of driving progresses. BEVs noted a 57% year-over-year increase in EV miles, while PHEVs by 24% last year (mostly proportionally to sales increase).

According to Argonne National Laboratory's Assessment of Light-Duty Plug-in Electric Vehicles in the United States, 2010–2021, the cumulative distance covered by plug-in electric cars in the US (through December 2021) amounted to 68 billion miles (109 billion miles). 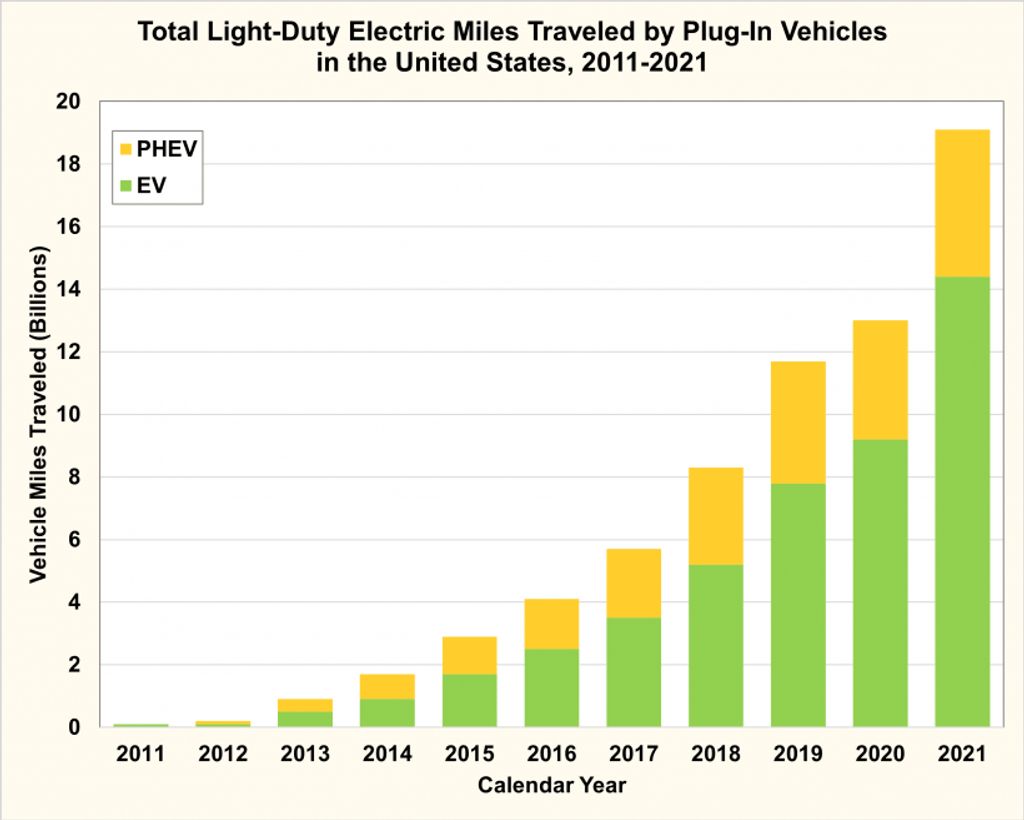 The report estimates that over 2.1 million plug-in electric cars have been sold in the US through December 2021 (about 1.3 million all-electric and 0.8 million plug-in hybrids), equipped with a total of more than 110 GWh of batteries.

It's also estimated that 19.1 billion electric miles traveled in 2021 reduced the national gasoline consumption by 700 million gallons of gasoline or 0.54%.

The difference between the fuel cost and energy cost in 2021 is estimated at $1.3 billion.

Cumulatively, 68 billion electric miles since 2010 is worth about 2.5 billion gallons of gasoline. So, the cumulative savings already is several billion dollars.

Those are pretty amazing numbers and let's just imagine that electric cars are just starting to sell in high volume. Every year those numbers will be improving, thus tremendously changing the world that we know today.

US: All-Electric Car Registrations Exceeded Half A Million Through September 2022
US: More Than 70% Of Plug-Ins On Road Were Assembled In North America