Powered by a BYD Blade LFP battery, the Tesla Model 3 competitor will be a China-exclusive model, at least for the time being.

Toyota has officially unveiled the second model in its bZ series of electric vehicles, the bZ3 sedan jointly developed for the Chinese market with local automakers BYD and FAW.

The automaker says the new model aims to offer customers a novel automotive experience based on three keywords: electrified, dynamic, and enjoyable. Starting off with the electrified part, the Toyota bZ3 is claimed to achieve a driving range of more than 600 kilometers (372 miles) as measured on the CLTC cycle.

That's made possible by the compact electric sedan's advanced powertrain consisting of BYD's Blade lithium-ion LFP battery using lithium iron phosphate and Toyota's extensive electrification technologies. While we don't get to learn the battery capacity just yet, Toyota says the battery structure, cooling, control, and safety monitoring systems were all newly designed for the bZ3.

In addition, the Japanese automaker says it has leveraged its electrification expertise to reduce battery degradation, with the goal to ensure 90 percent capacity even after ten years of use.

Moving on to the dynamic part, the Toyota bZ3 is built on the e-TNGA platform, which is also used by the bZ4X SUV. The architecture is said to ensure a comfortable ride, low center of gravity, excellent handling stability and responsive performance for the bZ3.

As for the enjoyable part, Toyota says the bZ3 has been developed based on the Family Lounge concept, an idea that "cars provide a space to enjoy time with family and friends, rather than merely being a means of transportation." The automaker says the bZ3 offers a coherent and comfortable interior space and enhanced digital features "perfectly integrated inside the cabin to suit customer preferences."

Now, as far as the styling is concerned, the Toyota bZ3 is not exactly a surprise as it has been teased by the automaker via the bZ SDN Concept last year as well as by China's Ministry of Technology and Information Technology (MIIT) in a regulatory filing.

As with the bZ4X, the bZ3 features the Toyota bZ series' hammerhead shark-like design format, but the sedan body style gives it a much higher aerodynamic efficiency. Thanks to that and the use of air guides, air curtains, flush door handles, aero-optimized wheels and rear bumper shaped to reduce air resistance, the Toyota bZ3 achieves a drag coefficient of 0.218.

Inside, the electric sedan features Toyota's Digital Island system that integrates a large vertical center display with a tray-type console. In addition to wireless charging, it integrates functions for linking smartphones and multimedia, as well as air conditioning, music, trunk release, and other controls. Voice control is also part of the system.

These are all the details Toyota is willing to share so far, along with the fact the bZ3 will be produced by FAW Toyota and sold through the joint venture's dealer network in China. We don't get a launch timeline, but a recent report from Reuters mentioned a production and sales debut before the end of this year, as well as an estimated base price of around $28,000. 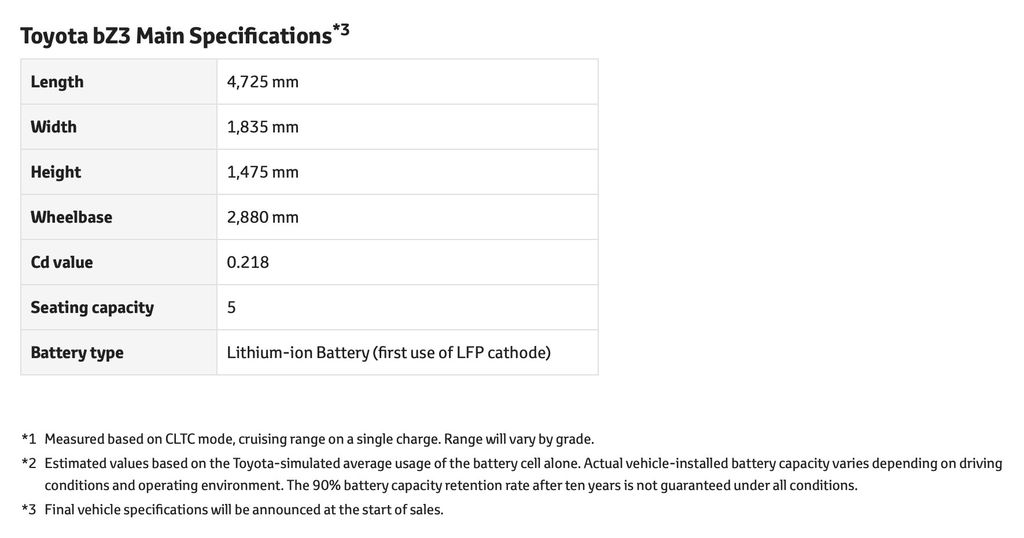