How Often Does Tesla Send OTA Updates & How Important Are They?

Tesla sends over-the-air updates often, and many are much more significant than most people may expect.

At InsideEVs, we talk a lot about Tesla's over-the-air software update capability, and for good reason. Many people outside the community don't likely understand that Tesla's vehicles improve over the course of ownership. Not only does Tesla send minor updates and bug fixes remotely, but it also initiates substantial improvements to its global fleet's safety, performance, and much more via OTA updates.

If you told a friend, family, or colleague that your car could suddenly accelerate more quickly, that it just got new active safety systems, or that features like heated seats, a dashcam, a camera-based security system, and much more are now standard – though they weren't when you bought the car (and you never paid extra for them) – they probably wouldn't believe you. This may be especially true if you explained that you never visited a "dealership" to get these improvements.

Many Tesla owners will tell you that the brand's OTA update capability is a major game-changer, and one of a few things that set Tesla apart from rivals. Other features that arguably give the electric automaker an edge over the competition include the brand's proprietary Supercharger public fast-charging network, as well as its overall focus on safety, software, and technology, in general.

Our friend David Roper, who has contributed several articles to us over the years, has been an EV owner for years. However, it took him some time to switch to a Tesla model. He owned a 2015 Nissan Leaf and a Chevrolet Bolt EV, both of which he handed over to his two daughters, though the one daughter sold the Bolt back to GM to get into a Tesla Model Y.

Roper currently owns and drives a 2018 Tesla Model 3 Long Range, and it dawned on him that he could easily track all the OTA updates his car has received over the years. In addition, he took the time to look over the release notes for every single OTA update in the last several years to give us an idea of how significant (or insignificant) each proved to be.

He put together a nice little graph to display his findings: 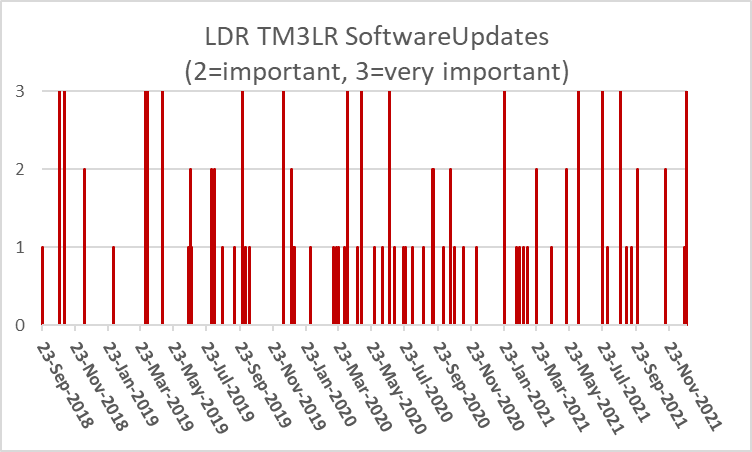 Roper tells us he thinks this graph "shows some of how Tesla is leading other BEV manufacturers in software." What do you think?

Let's start a conversation in the comment section below. Which Tesla OTA software updates do you think have been the most significant over the years?