According to a recent report published by Bloomberg New Energy Finance (BNEF) and shared by Green Car Congress, EV sales in 2021 stand to hit an impressive 5.6 million. For reference, automakers across the globe have a combined target of 40 million EVs sold per year by 2030.

As far as all global passenger vehicles are concerned, the latter three electrified vehicles made up some 7% of all sales across the globe in H1 2021. In 2019, during the same period, only 2.6% of vehicles were BEVs, PHEVs, or FCEVs.

BNEF also points out that the global fleet of these vehicles is now at almost 13 million, though only 8.5 million are 100-percent zero-emission vehicles (ZEVs). 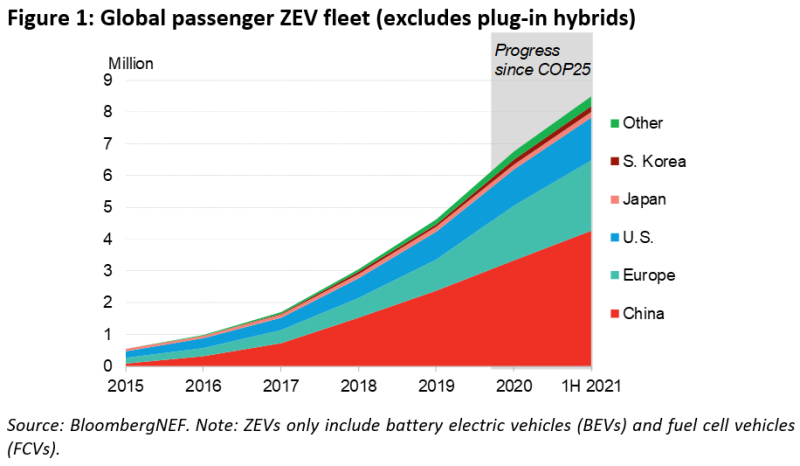 Forecasts related to the global fleet of ZEVs are rising as well. BNEF estimates that some 677 million ZEVs will be on the road by 2040. Its previous estimate was much lower, at 495 million.

According to Bloomberg, the transition to BEVs is being accelerated due in part to reduced costs in the segment, growing charging infrastructure, longer-range EVs, and an increasing variety of options for EV shoppers.

"Ambitious targets are increasingly being matched by policies and regulations stimulating market growth for zero-emission vehicles. The European Union’s proposed CO2 emissions standards imply that electric vehicles should account for 25%-32% of sales in the bloc by 2025, and 60%-83% by 2030. Proposed fuel economy rules in the US imply a 24% market share for electric vehicle by 2026, on the way to a 50% share by 2030 under President Biden’s executive order. China targets 20% new energy vehicles by 2025, increasing to 40% by 2030."

There are many more details in BNEF's report. Follow the links below to see BNEF's Zero-Emission Vehicles Factbook, as well as Green Car Congress' in-depth summary of the report.