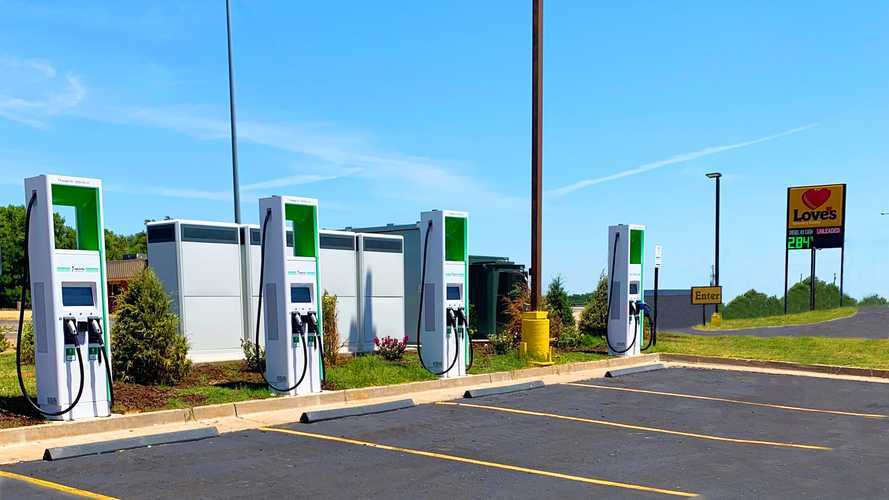 Progress continues as the network surges past 2,000 installed stations.

Electrify America today has announced they are collaborating with Love's Travel Stops to expand their high-speed electric vehicle DC fast charge network. The collaboration will see seven new Electrify America sites in six states, with a total of 28 stations added to the growing network.

Five of the sites have already opened, and the remaining two are scheduled to open in early 2021. The sites are located in Utah, Oklahoma, New Mexico, Florida, New York, and Arizona.

Electrify America recently announced they have installed their 2,000th charger, and that milestone was achieved only two years after installing their very first location in Chicopee, Massachusetts. Since then, the network has maintained an average installation rate of nearly 100 high-speed EV chargers per month, even with the COVID-19 crisis slowing down the new installation process.

“As we continue building charging stations at accessible sites, Love’s Travel Stops was a perfect fit because of its convenient locations near major highways,” said Rachel Moses, senior manager for site acquisition, development and strategy at Electrify America. “Providing EV drivers with the opportunity to charge their vehicles at Love’s locations will help instill confidence for longer interstate trips, and can encourage more consumers to consider making the switch to electric.”

As with most Electrify America sites, the chargers will be capable of delivering between 150 kW and 350 kW, with the ability to add up to 20 miles of range per minute to an EV capable of accepting that much power.

The problem has been that most EVs can't accept nearly as much power as the high-speed DC fast chargers at Electrify America sites can deliver. However, that's changing, and as new EV models are introduced, they are increasingly capable of charging at higher rates than ever before.

This isn't the first time Electrify America has partnered with a travel-stop gasoline & convenience store chain. The network already has a number of charging station locations in the parking lots of Sheetz, Wawa, and Quick Chek locations. These chains have premium locations located along interstate highways; exactly the locations that DC fast chargers need.

Tesla already has four of its Supercharger sites at Love's Travel Stop locations in Texas and Alabama. Electrify America, along with Tesla and all of the EV charging networks are currently competing for premium fast-charge locations. While their collaboration with Love's Travel Stops currently only includes seven locations, perhaps there will be more to come. Love's Travel Stops have over 520 locations in 41 states, many of which are along major interstates, so it's clear that they can be an important strategic partner.