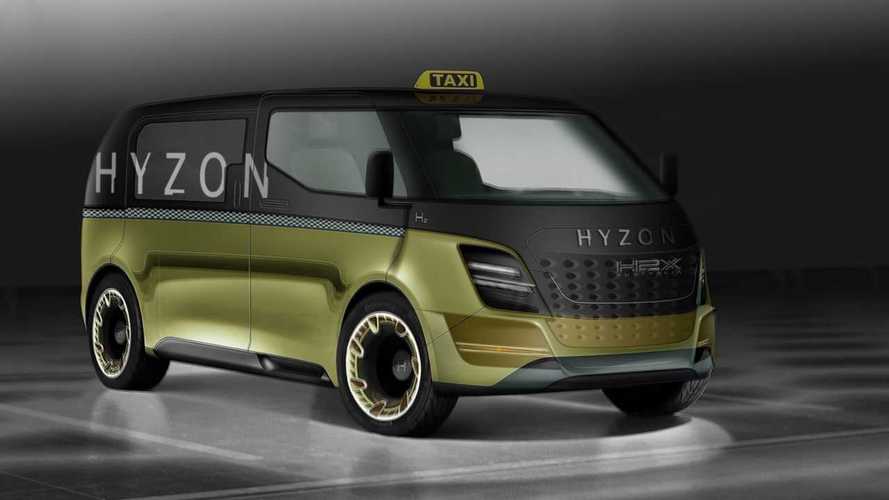 According to the company, its businesses did not interfere with those of Horizon.

In times when people believe truth is a matter of opinion, journalism has a difficult task. Presenting facts is not always enough, but that's our goal to escape the many traps communication hides. Vaporware is one of them, and new companies have to prove they are for real. That was the case for Tesla and Nikola. H2X also felt the need to do this, and its PR team got in touch to clarify points we still were in doubt from our previous article.

The first and most important thing to prove it is a credible enterprise was to explain why it has used rebranded renderings to present its ideas. Clarifying that implies understanding where H2X comes from, which also explains what Pateo Kinetic is.

Hyzon Motors And Horizon Fuel Cell Are Not Happy With H2X

If you remember, that is the name that appears in an early image of the pickup truck H2X presented as one of its future products. The explanation is that Pateo Kinetic became H2X. With that, all the renderings that had the Pateo Kinetic logo had to be modified to present the new branding.

The renderings would have been created by a design agency, according to H2X. We later learned this design agency belongs to Chris Reitz, one of H2X's partners. When Pateo Kinetic Pty Ltd became H2X Pty Ltd, the renderings were transferred to it. That explains why the H2X van seemed to be based on the Hyzon Motors van we already presented. The truth is the Hyzon van rendering belongs to Reitz, who allowed Hyzon a "limited use" of it.

Another relevant doubt was about what H2X promises to do. Being Pateo Kinetic before June 2020, how did it have time to set up a business and to promise running prototypes for November 2020, as @AuManufacturing reported?

According to the Australian company, its "whole fuel cell team had been working on a number of projects from fixed power to vehicle applications, and have recently joined the H2X team to focus on all hydrogen and fuel cell technological applications."

Both this team and the one in charge of design would work together since 2016 when they were at Grove Automotive. According to H2X, that would allow them to deploy the product side of the business rapidly.

It says it has its headquarters in Sydney, Australia, but "personnel and operations based in Europe, Asia, and the USA," more specifically in Barcelona, Kuala Lumpur, and Indianapolis. We asked the company to provide us the headquarters address, but it didn't.

The issue is that most carmakers also have teams that work together for ages. Yet, projects still take around three years to be developed.

H2X claims it will use "industrial origami" to create its vehicles, which reduced material usage by 50 percent. Due to higher simplicity, "the amount of labor and time involved in the operations also reduces by nearly 40 percent. We have never heard of industrial origami before. Yet, there is a company with that name, but its website does not work.

Even if industrial origami can help in saving material, labor, and time, we have no idea which impact it has on the project of a vehicle. The hard to meet homologation rules worldwide do not make it look any easier with industrial origami.

That said, joining two teams and deploying something rapidly would only make sense if they already had the pieces to put together, such as the fuel cells or a car platform.

We asked H2X if that is the case, but the company only addressed this by saying it is focusing on light vehicles. That contradicts the @AuManufacturing report that H2X would produce heavy vehicles before anything else.

Many of these doubts emerged after Craig Knight, from Hyzon Motors, noticed we found it strange that the H2X Ute had the Pateo Kinetic logo in it. He got in touch to tell us about the fact H2X's executives worked for Hyzon, – a competing company – while the Australian enterprise was apparently developing its project.

The Australian company tried to clear ethical worries saying that "the group has gone back to a business model developed before Hyzon started." In that sense, "there was no necessity to spend time on our project while working for Hyzon because all team members knew what they were doing." That implies the people with full-time contracts with Hyzon did not do anything related to H2X while working for the competing company.

If that is the case, why were these executives not dedicated to H2X instead of working for Hyzon? Brendan Norman probably clarifies that below:

"With COVID-19 and recent (Australian) government support towards production of Green Hydrogen, the need for supply and self-sufficiency became more prevalent and very quickly brought to life plans I have been working on for years to establish something for Australia."

Our impression is that Pateo was an idea waiting to be deployed. Norman and his partners may have thought it gained momentum due to the facts he mentioned. We would add that the Nikola Motor Company value surge also seems to be a factor, as Knight said. Before that, all of these executives were trying to make a living the best way they could.

Craig Knight got back in touch with us to clear any impression that he had any resentment with the executives from H2X. In fact, he wanted to say he wishes the best for H2X because "we need as many zero-emission vehicle companies as possible to be successful in the world. There are lots of fossil fuel burning engines to replace."

H2X also adopted a conciliatory tone and said it put Hyzon in touch with one of its investors, Elvin Group, "for potential business opportunity which may still be ongoing."

With all clarifications made, we could not avoid asking H2X why hasn't it decided to follow the Rivian strategy of only going public with at least a working prototype. Having two investors supposedly already gives it the support it would need to present one.

To reinforce that, the PR department of the company states, "H2X have already detailed designs with tested applications, so we do this with a lot of confidence, and our existing investors are standing behind that confidence." That said, why so soon?

The Australian company said Tesla and Nikola disclosed their plans before having anything to present and that "funding requirements require us to be public so that potential investors and also potential staff are aware of us." It also says it wants the public feedback to develop its vehicles instead of presenting what it believes customers will want. Indeed.

Yet, Tesla is still accused of being a fraud even after having delivered 1 million vehicles. Nikola is starting to get the same sort of insinuation, including from Tesla advocates that complained about such suspicions about the company they defend. Rivian never had to hear any of that, and it has Amazon and Ford as its shareholders.

That said, we just wanted to be fair to H2X and allow it to try to explain why we should believe it is a serious company with serious plans. It made efforts to prove that, and that is something that deserves respect. We also recognize it has experienced professionals on its boat. Regardless, a working prototype and a solid business case are probably what it needs to prove it is for real. We'll keep you posted when and if that happens.