We Take a Ride In A BYD Electric Bus In Santiago, Chile 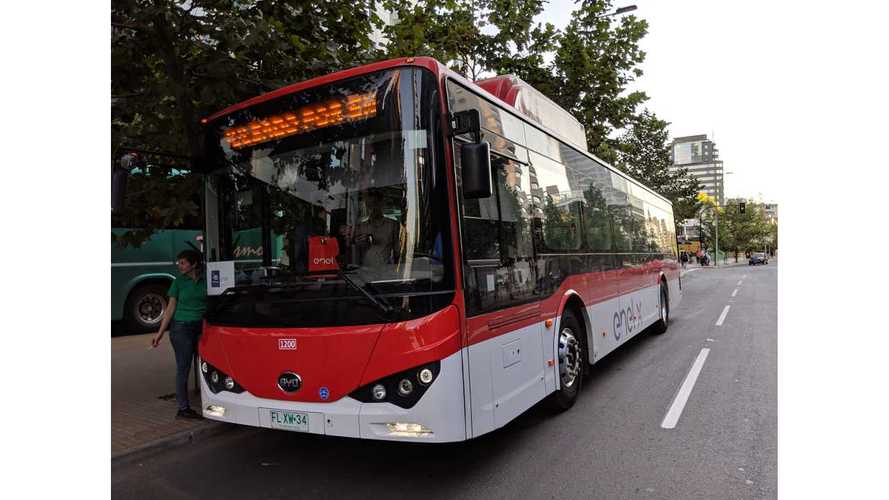 Ride an electric bus to a Formula E race: Check

It's probably a surprise to most people, but Chile is second only to China when it comes to the number of electric buses operating in their country.

Back in December, we reported on the delivery of 100 BYD electric buses to Santiago, Chile. That was only half of the total amount of electric buses destined for the Chilean capital, as another 100, made by Yutong Bus co, are also on order.

InsideEVs was in Santiago last week for Formula E, and had the opportunity to take a ride in one of the BYD electric buses.

Most of the seats are at the rear of the bus, with room for up to 50 standing passengers in the front.

The buses are operated by Metbus, and were financed by Europe's largest utility, Enel. Enel's e-mobility division, Enel-X, plans to invest over $340 million dollars worldwide in electric mobility this year, and installed the charging stations for the electric buses in Santiago. Enel is also the company that acquired California based EVSE maker, eMotorWerks in 2017.

The buses have seating for 31 and standing room for 50, for a total of 81 passengers. They have a driving range of 155 miles and take 3 hours to fully recharge. While the initial cost is higher than a diesel bus, we were told they cost about 70% less to operate than the diesel buses, which results in large savings over its lifetime, even considering the higher upfront cost.

There's USB ports on all of the support poles, allowing passengers to charge their devices.

I found the bus very comfortable, and really appreciated the USB ports that allow passengers to charge their electronic devices. Additionally, the air conditioning worked exceptionally. You might say, well it should because it's a new bus, but that's not the whole story. We also rode in relatively new diesel buses during the week, and the air conditioning couldn't handle the 99-degree heat Santiago was experiencing. We were told that locals all love these buses because of how quiet they are, and also because of how great the A/C works.

The electric buses also have free WIFI, which worked very well, even with most of the 30 of us all using it at the same time. I had no trouble downloading and uploading photo files, and websites loaded as quickly as they normally do. Again, this isn't a feature that can only be installed on an electric bus, but none of the other buses we rode on had WIFI, and this, as well as the USB ports, and exceptional air conditioning, really made riding in these electric buses a pleasure.

Enel X, along with BYD Chile and Metbus, created the first 100% electric bus terminal in Latin America and have plans to move to complete zero-emission public transportation in the capital city, Santiago by 2040.

The electric bus termini, located in the neighbourhoods of Peñalolén and Maipú, are symbols of sustainability and digitalisation given the respective 63 and 67 charging points available for the electric buses and a solar parking area designed to house photovoltaic panels that, by generating clean energy directly from the sun, contribute to meeting the energy requirements for charging the batteries and the functioning of the infrastructure - Enel X

Gallery: We Take a Ride In A BYD Electric Bus In Santiago, Chile