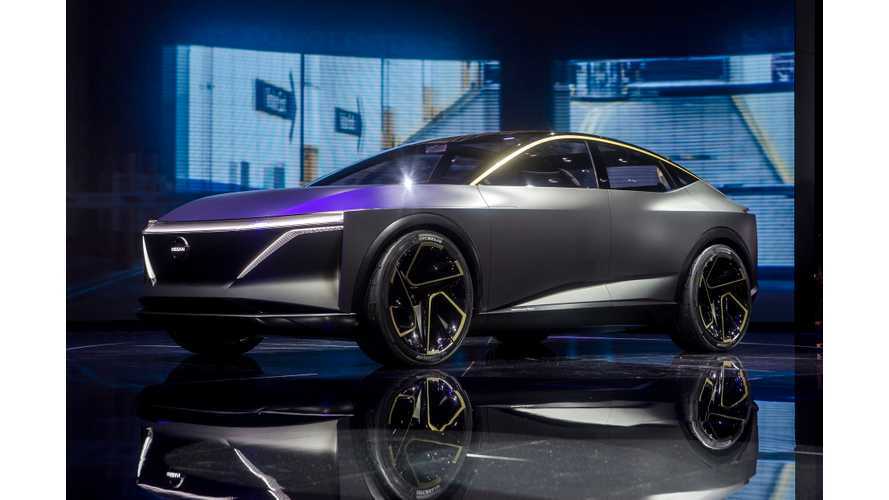 Something New Lies Underneath

At the 2019 North American International Auto Show (NAIAS) in Detroit, both Nissan and Infiniti brands previewed a pair of all-electric concept vehicles that provide a glimpse of the company’s next BEVs and strategies.

Infiniti is going All Electric

Infiniti presented the QX Inspiration concept, a battery electric midsize SUV built on Nissan’s new BEV platform.  Infiniti’s president, Christian Meunier, announced that by 2025 Infiniti plans to offer only electric or hybrid vehicles, with the first vehicles due in 2021.

The Infiniti QX Inspiration welcomes you in

The QX Inspiration envisions a long-range dual motor all-wheel drive SUV with high-level autonomous driving capabilities. While Infiniti provided no details, the focus of the QX was to show Infiniti’s new design language for its electric vehicles, with the new face of future Infiniti vehicles without a grill and an aggressive cab-forward stance with a tight greenhouse.

Purposely designed as a BEV, the interior has a fully flat floor, rather than a BEV conversion of an existing internal combustion engine platform. The QX rides on a 112-inch wheelbase with the dual electric motors and the battery packed low in the body for enhanced center of gravity and superior handling.  Overall, the concept is 183-inches long.  The Infiniti QX Inspiration doors are the center opening “suicide doors,” with a wide pillarless entry and front seats that rotate 30 degrees outwards, making for easier ingress and egress.

With the drivetrain and battery pack below the floor, the spacious interior allows for a lounge-like space and a nod to the day when self-driving technology makes the traditional driver-passenger relationship more intimate and welcoming.

Infiniti has been struggling to find its niche in the market over the last few years.  It had high hopes for its recently updated QX30, a CUV based on the Mercedes GLA platform, squarely aimed at American’s thirst for all things CUV/SUV.  But the QX30 has been met with a tepid response, and overall Infiniti’s sales are down almost 3 percent year over year.  The move to a portfolio of electric and hybrid vehicles is an attempt to grow the marque by appealing to a new generation of millennial buyers that value experience, technology, and uniqueness.

Nissan looks beyond the Leaf

The Nissan Leaf bootstrapped the move to battery electric vehicles almost 10 years ago.  Since then the Leaf has sold more than 300,000 copies worldwide.  But the design of the current Leaf is dated and conservative compared to its rival BEVs.

Nissan shows what the Leaf may become

At NAIAS, Nissan presented a concept of what the next generation Leaf could be as well as the platform that all Nissan and Infiniti BEVs will be built on in the next couple of years.

The Nissan IMs is the company’s vision of a next-generation sports sedan, building on Nissan’s previous BEV concepts—the Nissan IDs and IMX models.  The design is similar to the Infiniti QX Inspiration, but instead of a CUV, it is a high-performance sedan.  The cabin features a B-pillar-less interior space with center-opening “suicide doors” and an air suspension that can raise and lower the vehicle depending on its driving mode. The chassis is designed to set the drive motor(s) and battery pack low in the car, contributing to a better center of gravity that will enhance handling.

The interior layout is unique with a “2+1+2” seating architecture, including a pivoting front seats and a rear seat that offers either three across seating or, with the outboard rear seats folded, a “Premier Seat” in the rear center.  This layout is a nod to executive or ridesharing travel.

As with all of Nissan’s BEV concepts, the Nissan Intelligent Mobility technology is an integral part of the design.  The IMs includes full connectivity and Nissan’s highest levels of safety and autonomous drive systems.

Unlike the QX Inspiration concept, Nissan provided more information on the platform for its next generation BEVs.

The IMs is built on a 114-inch wheelbase vs. 112-inch for the QX Inspiration (and 106 inches for the current Leaf) and has all-wheel drive with front and rear electric motors delivering 483 horsepower (360 kilowatts) and 590 pounds-feet (800 Newton-meters) of torque.  The IMs has a 115-kilowatt-hour battery with a 380-mile estimated range. There was no announcement the battery’s thermal management system.

Based on air dampeners, the electronically controlled suspension can automatically adapt to road conditions and driving mode.  Both the Nissan and Infiniti concepts ride on massive 22-inch wheels.

The exterior follows Nissan’s current “Vmotion” design language, but without a grill.  Wing cameras replace traditional rear-view mirrors. While most concept vehicles never see the light of day, the IMs seems to be based on substantial engineering work, so much that Nissan has a detailed list of specifications for the sedan.

These two concepts describe a strikingly similar BEV platform, one that is a thoroughly modern “skateboard” that can be adapted to serve multiple vehicle “Top Hats” including SUVs, sedans, hatchbacks and, most likely, truck, vans and even two-seater sports cars.  Considering Nissan’s current ICE vehicle portfolio, any of those could have a BEV version using the platform that is the basis for these two concept vehicles.  Just like Volkswagen’s MEB modular electric vehicle platform, it is conceivable that Nissan’s EV platform could do the same with the capability to offer different wheelbase and tracks as well as being able to accommodate several traction battery and motor sizes in two-wheel and all-wheel drive configurations.  A modular platform will allow Nissan to leverage its worldwide manufacturing resources to produce different models on the same manufacturing lines just as they currently do with ICE vehicles.

The next generation Leaf, as well as Infiniti’s first BEV, are due in 2021, which will line up perfectly with this new platform.  With the next wave of BEVs set to start arriving that year, this new platform will be critical for Nissan and Infiniti in the coming years.