You won't find these on MYEV.com!

Well, here's an interesting proposition. If you enjoyed the past four seasons of the Formula E all-electric racing series and would like to purchase one of those original open-wheel cars, you can now buy one. With season five bringing a completely new design, the cars that pioneered through the first four seasons are no longer needed and are now reportedly up for sale. 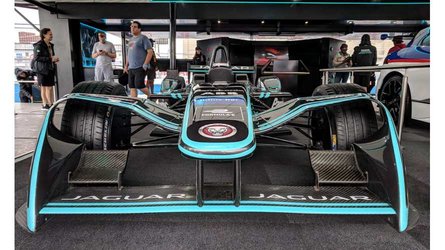 With ten teams, each with two drivers and each driver needing two cars — they batteries held only enough juice to complete half of the race distance, so drivers would jump into a fully-charged car halfway through — there could be as many as 40 of the race-hardened vehicles for sale. Though first dibs might go to the teams themselves, or perhaps even individual drivers, there should be plenty to choose from.

When new, the FIA-certified series shelled out 400,000 Euros ($454,100 at today's rates) for each of the cars. They were all built on the same chassis by Spark Racing Technology and have a battery from Williams Advanced Engineering. Through the course of the seasons, restrictions on modifications were loosened, some there may be some amount of discrepancies between drivetrains. According to series founder Alejandro Agag, "The current cars are still fit for purpose. They’ve provided us with four seasons of exciting, intense, and unpredictable racing." He went on to tell Bloomberg, "I know there’s a lot of interest from collectors and they could even be used for racing purposes."

You won't find an ad for any of the racers on your local Craigslist, or even on MYEV.com. We understand that if you really want one, and have approximately $200,000 to $289,000 burning a hole in your pocket, you'll have to get in touch with the Formula E series directly. If you do happen to pick one (or more) up, let us know what your plans for the historical machine might be. While we think any new racing series needs to start with new-from-the-ground-up cars, we wouldn't mind seeing these in action one last time. Especially if our view is from the driver's seat.