EV Charging Adapter Wars: Which Side Are You On? 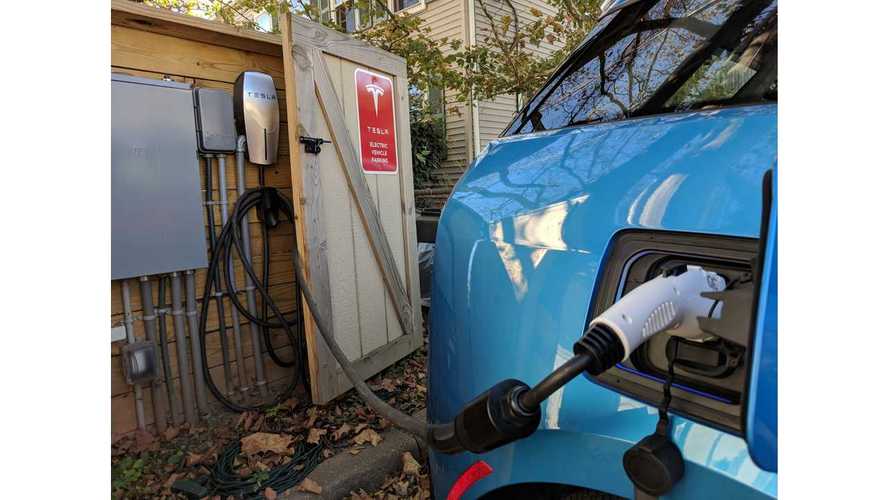 The sign clearly states "Tesla Electric Vehicle Parking". Is it OK to charge an electric vehicle from another manufacturer there?

A few weeks ago, we published an Op-Ed post by InsideEV’s reader Brian R on a new adapter available which will allow non-Tesla electric vehicles to charge at Tesla Destination charging stations.

Brian was happy to report that the JDapter Stub, made by Quick Charge Power, allows him to charge his Chevrolet Bolt at any of the thousands of Tesla Destination charging stations across the US. He wrote this about his first experience using the adapter:

“Upon arriving at the Refuge Inn in my Bolt EV, I found the Tesla station in the parking lot of the property. I whipped out my Stub, connected it to the Tesla charging plug, then plugged it into my Bolt. Within 2 seconds, my Bolt’s charging light turned green and I was sucking down juice in part thanks to Elon Musk/Tesla (Thanks Elon!)”

Brian was correct in giving props to Elon Musk and Tesla because Tesla donates the equipment and in many cases, pays for the entire installation of these Destination chargers. The site host basically agrees only to maintain the equipment, and to provide the electricity needed. While a few OEMs like BMW and Nissan have made investments in public charging equipment, nobody has even come close to the hundreds of millions that Tesla has spent in charging infrastructure.

Some Tesla Destination locations have signage that simply states "Electric Car Charging Station", with no reference to Tesla.

So the question is: Is it really OK to use an adapter to charge your non-Tesla EV on a Tesla Destination charging station? Some commenters on various EV sites and forums have argued that no, it’s not. Their point is that Tesla is really the only electric car manufacturer that’s actually concerned with their customer’s public charging needs. That everyone else looks at electricity for their customer’s electric cars like they look at providing gasoline or diesel; it’s not their responsibility. So why then should their customers benefit from Tesla’s extraordinary infrastructure effort? Also, is it fair to Tesla if their destination chargers are in use by a non-Tesla EV and a Tesla owner arrives to find out they cannot plug in?

However, there is another side to this, with a legitimate argument. Every Tesla sold comes with an adapter to allow Tesla vehicles to charge at charging station with the J1772 connector, and Tesla also sells a CHAdeMO connector for DC Fast charge stations. So, Tesla’s been doing this all along, the only difference is the vast majority of the public charging stations weren’t paid for by other car manufacturers, and the property owners as well as the managing networks aren’t aligned with any one, specific brand.

Some of the newer Destination Charging locations also include a ClipperCreek HCS-40 EVSE, perhaps to ensure the Tesla unit will be available for Tesla customers when they arrive.

To complicate things even more, Tesla has recently begun installing a ClipperCreek HCS-40 charging station next to the Tesla Wall Connector, at most Destination charging locations. So, is this Tesla’s way of saying that they are simply supporting the public charging of all EV makes, or are they doing this because they are concerned that other EV makes will be clogging up their Destination charging locations using adapters like the JDapter Stub? Perhaps a combination of both.

Ultimately, the decision of who can use the stations is up to the property management at each location. As far as I know, Tesla doesn’t require the stations to be kept available for Tesla vehicles. These stations are on private property, and once Tesla installs them they become the property of the owner of the location, so the rules will vary from property to property. For that reason, I highly recommend asking permission before you plug your EV, Tesla or not, into a Destination charger.

My BMW i3 using the JDapter Stub to charge at a Tesla Destination charging station.

The few times I’ve used my JDapter Stub, the management has been happy to allow me to plug in, even though I specifically told them that I do not have a Tesla. Personally, I think the vast majority of property owners won’t mind you plugging in, especially if you are patronizing their business, regardless of the make of your EV. But is this really what Tesla envisioned when they developed the Destination charging program?

Should Tesla Destination charging stations be utilized by non-Tesla electric vehicles? We’d like to know what the InsideEVs community thinks in the comment section below.