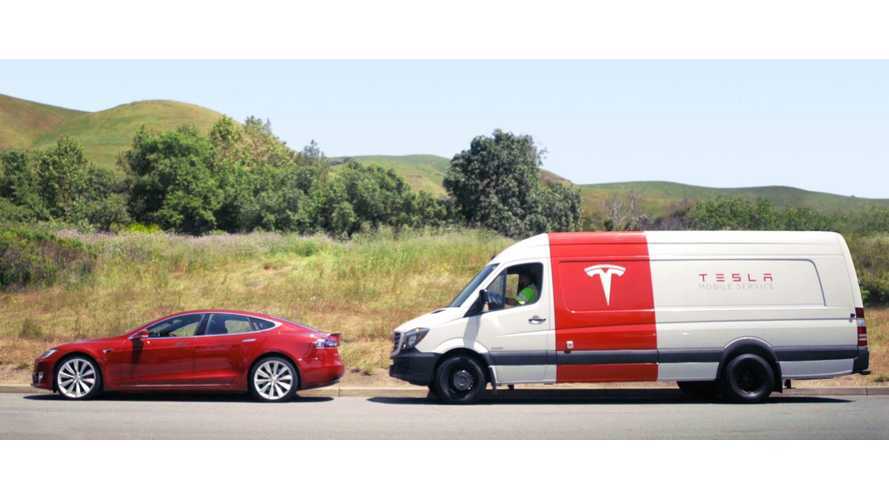 It was only a matter of time before Tesla would switch to electric vehicles for its Mobile Service, but the more interesting part is how the automaker is going about it.

Due to a lack of service centers in some areas, Tesla sends technicians into the field in ICE vans filled with parts and repair equipment. The vans are stocked and the techs are trained on every aspect of the vehicles so that they can fix nearly anything right in your driveway or on the side of the road.

However, having the world's most significant electric vehicle manufacturer show up in a gas guzzler makes little sense...and it's not sexy.  Tesla's President of Global Sales and Service, Jon McNeill, admitted at a recent event in Amsterdam (via Electrek):

“We didn’t think that it was very cool to show up to fix an electric vehicle with a combustion engine van. It really bugged us. Some really savvy technicians on our team figured out how to retrofit Model X to fit all the tooling and parts needed to do service.”

According to Electrek, McNeill revealed that the company is set to begin using special EVs to replace the current ICE work vans. One would think that this might mean electric service vans or something based on the tech that Tesla is working on for its upcoming electric Semi and/or pickup truck. However, this is surely not the case. C'mon ... Tesla wouldn't even think of revealing that technology ahead of its official release.

Instead, some engineers at Tesla came up with a way to modify the Model X and even the Model S to fit all of the necessary equipment and function as mobile service "vans". It's crazy to think of how modified a Model S would need to be to fit all of that equipment. Perhaps it will pull a trailer? Even the Model X pales in comparison to the big ICE work van pictured above.

Tesla has used a Model X in the past to pull its Mobile Design Studio, as well as the Tiny House. Maybe it will be a combination of storage within the vehicles and then some type of trailer as well. McNeill said that due to the retrofit, the vehicles will have to be approved for public roads. He believes that we will see the transition sometime next year.