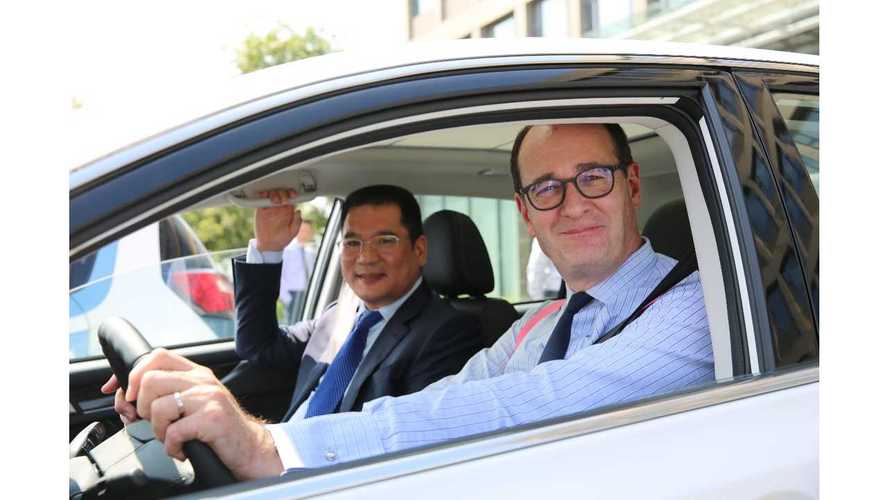 Ford and Zotye Auto are exploring the possibility of an all-electric vehicle joint venture (50:50) in China that would sell EVs under an indigenous brand.

Both partners signed an MoU, but didn't reveal either an intended production timeframe, or the value of the investment considered.

Ford is currently offering a plug-in produced in partnership with Changan, while Zotye produces and sell EVs under its own brands (more than 16,000 sold in the first seven months of this year).

"The goal of the MoU is to explore the establishment of a joint venture for the development, production, marketing and servicing of a new line of all-electric passenger vehicles in China. The announcement is consistent with Ford’s vision for a more sustainable auto industry, as well as efforts to contribute to societal goals of improving air quality and addressing climate change."

"China is the fastest-growing market in the world for new energy vehicles (NEVs).  Ford expects the market for NEVs in China to grow to six million units per year by 2025, of which approximately 4 million vehicles will be all-electric.

Vehicles produced would be sold under an indigenous brand owned by the new joint venture and would aim to capture a sizeable share of China’s all-electric passenger vehicle market. Additional details, including information about the brand, products and production volumes, will be announced at a later date, pending a final definitive agreement and regulatory approvals."

"As part of its global electrification commitment, Ford has invested $4.5 billion to make electric vehicles that offer customers more capability, productivity and performance. Ford plans to introduce 13 new electrified vehicles globally in the next five years, including an all-electric small SUV to be sold in Asia, North America and Europe. Ford also recently announced an ambitious China electrification strategy and confirmed that 70 percent of all Ford vehicles sold in China will have electrified powertrain options by 2025.

The new 50:50 joint venture would be a major step forward in building on Ford’s electrification initiatives and will significantly expand Ford’s footprint in China, along with the company’ssuccessful joint ventures, Changan Ford and Jiangling Motors Corporation."

“The potential to launch a new line of all-electric vehicles in the world’s largest auto market is an exciting next step for Ford in China. Electric vehicles will be a big part of the future in China and Ford wants to lead in delivering great solutions to customers.”

“The MoU between Zotye Auto and Ford opens the door for us to explore our cooperation in the development of clean energy vehicles. This presents us with an exciting opportunity to leverage each other’s strengths in achieving a win-win situation for both parties’ growth in the fast-evolving Chinese electric vehicle market.”

There's no indication whatsoever that those partnership would spawn any of these future electric vehicles to be sold outside of China, let alone the US or Europe.