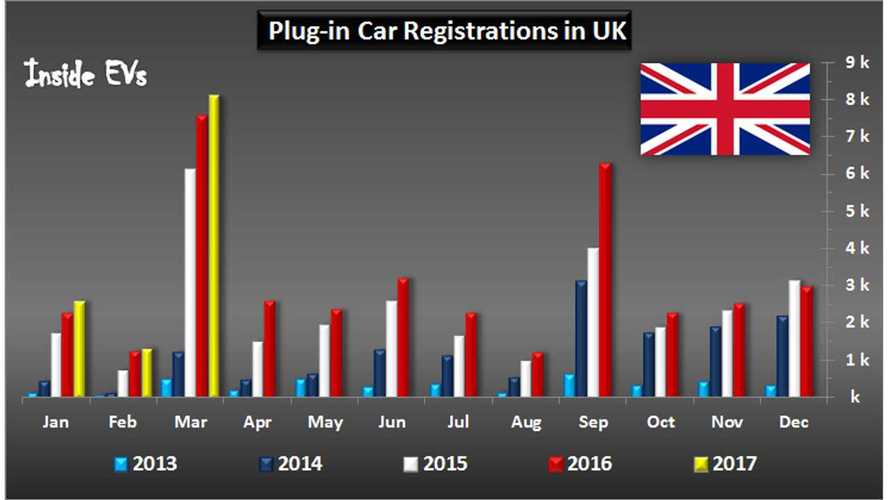 The UK noted its best ever monthly sales of vehicles in March (at 562,337 new registrations).

Besides the normal annual spike caused by plate changes, consumers were doing everything possible to avoid the new VED charges that shakedown petrol-using vehicles priced north of £40,000 (there is now a £310 annual supplement for five years from the second year of registration).

"The UK’s new car market grew by 8.4% in March, making it the biggest month since records began in 1997, according to SMMT figures.

The record performance came as buyers seized the chance to buy cars before the new vehicle excise duty (VED) rates came into force. From 1 April, under the new system all new cars, except for those with zero emissions, are subject to an annual flat rate charge."

Along with the overall best auto sales number, plug-in vehicles noted a best ever result with 8,087 (up 7% year-over-year) sales, good for a market share of 1.44%.

In total, around 12,000 new plug-ins were registered in UK so far this year.

As always, readers are curious as to how specific brands and models have fared for the month, especially Tesla, however data is not very forthcoming on the subject, but we can ballpark the number to within ~100 units via the process of elimination.  For March Tesla sold about ~875 vehicles in the country, more than triple the month prior.

In coming months UK should reach milestone of 100,000 plug-ins sold, thanks in part to the Plug-In Car Grant scheme introduced in 2011.