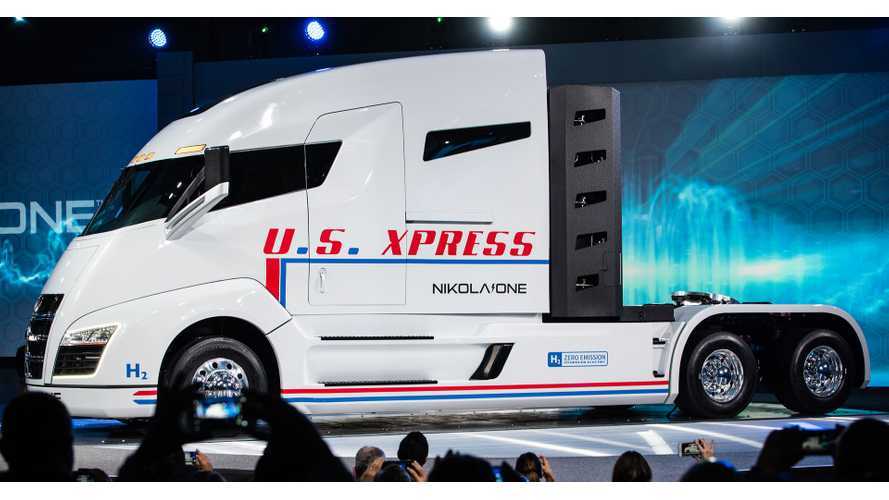 A lot is apparently going on at the Nikola Motor Company, which is developing a long-range hydrogen fuel cell truck with a 320 kWh battery.  The long haul truck is scheduled for production in 2020.

According to the latest news, the Nikola One is currently undergoing design tweaks to enable it to be more autonomous (if that is a thing), lightweight and accessible.

Weight is to be 2,000 lbs lower than in a comparable diesel truck, while at the same time the truck is to be wider and roomy than the original prototype, with two doors (the prototype was single-door).

The goal is to have self-driving capability for driver-less operation, with a backup manual system.

The fleets that placed pre-orders are to be named in the next two months. Nikola says it has received reservations for 8,000 trucks, but apparently have "verbal commitments for more than 25,000 trucks".

The plan for the near future is to complete bench testing, and do "live stress testing by mid-2018" with three years of tests in extreme hot and cold.

"And by the end of next year, Nikola One will be made available to fleets to be tested on runs between cities, up steep inclines, through rotten weather and in other challenging conditions,"

Pricing of the trucks has yet to be announced, but that will happen in early 2018 (price-per-mile system is also considered with prices 20-30% lower than diesel trucks).

"There are lots of variables with pricing. But we want the operator to get their return on investment on Day One by only getting billed per mile."

Beside trucks, Nikola is also developing proprietary network of hydrogen fueling stations (376 in U.S. - if you can believe that, we are more than a little skeptical) with output for 12,500 kg of hydrogen per day. First eight are to be announced this summer.

Additional notes on what is happening with the company:

Milton also referred to Tesla semi-truck that will be unveiled in September, and quotes some numbers that (as far as we know) are currently unknown for the Tesla:

"Nikola’s truck will be able to handle travel in ports, long-haul environments and inner cities, while Tesla’s is designed only to handle port transit, Milton said."