Buick Voltec To Launch In China This Year 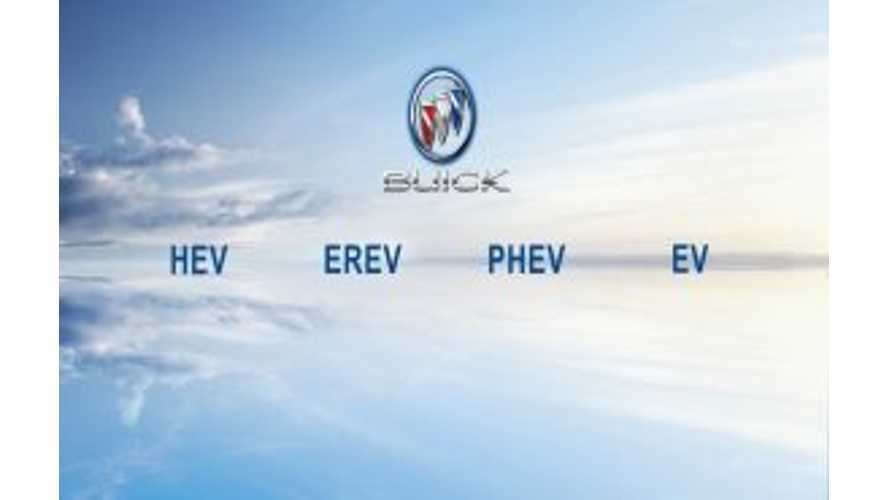 Buick has confirmed what we reported several months back.

The automaker will launch a Voltec-power car in China later this year.

It's likely that the car in question will be called the Buick Velite, though the automaker is unwilling to divulge this information right now.

We've seen the Velite in concept form and perhaps have even caught it on the road in a more production-ready look, but until Buick confirms Velite as the the Voltec car to launch later this year, we can't be certain if Velite is the upcoming Voltec Buick.

What we do know for sure is that Buick's upcoming EREV will prioritize electric range. Buick is saying electric range will exceed 100 km (62 miles), but that's certainly an optimistic figure based on China's testing methodology. Total range is pegged at 700 km or 435 miles.

In addition to the EREV, Buick says that both a PHEV and BEV will launch in China within the next two years.

SHANGHAI – Buick announced today that GM’s proven extended-range electric vehicle (EREV) technology, a new-generation of 1.0T/1.3T Ecotec engines and a nine-speed transmission will all be adopted in new or refreshed models launched in China this year.

The pure electric driving mode is prioritized to meet daily user demand for zero emissions and fuel consumption, with the electric driving range surpassing an estimated 100 km. In EREV mode, which leverages an on-board engine, the range increases to an estimated 700 km. This eliminates so-called “range anxiety” and opens a new chapter for inner-city mobility.

GM’s all-new small-displacement Ecotec engines were developed based on an all-new architecture. They have a compact design, low fuel consumption and high performance, along with reduced noise and vibration.

The 1.0T and 1.3T engines that Buick will adopt in China integrate a host of advanced technologies, seven of which are being applied for the first time by GM. They include an innovative system that combines a turbocharger with twin injectors, an optimized single-cylinder architecture design and transfer balance technology. The boosted torque response increases driving pleasure.

GM has leveraged its global resources to create an all-new intelligent nine-speed transmission that was developed and validated globally, including on Chinese roads.

The compact, efficient transmission features a wider gear ratio range that extends to 7.6:1. Its first gear ratio is up to 4.69, enabling easy acceleration from a standstill, while the top gear ratio is as low as 0.62, achieving optimum highway cruising with a low engine RPM.

This design not only optimizes vehicle acceleration and fuel economy, but also reduces engine noise while cruising. The result is a smooth, refined gear-shifting experience at different speeds.

From 2014 to 2016, the average fuel consumption of new Buick vehicles sold in China decreased by 20 percent. Last year, Buick launched the all-new LaCrosse Hybrid and hosted the world premiere of the Velite Concept, which serves as a template for future new energy vehicles under the brand’s Buick Blue strategy in China.

This year, Start/Stop intelligent engine technology will become standard equipment for the Buick lineup. By 2018, more than 80 percent of Buick engines will adopt turbocharging technology in China.

Buick is an international brand offering vehicles with sculpted designs, luxurious interiors and thoughtful personal technologies, along with responsive-yet-efficient performance. Buick is attracting new customers with its portfolio of award-winning models in North America and China. Buick has sold over 8 million vehicles in China since its introduction by SAIC-GM in 1998. More information on the Buick brand in China can be found at Buick Media Online.