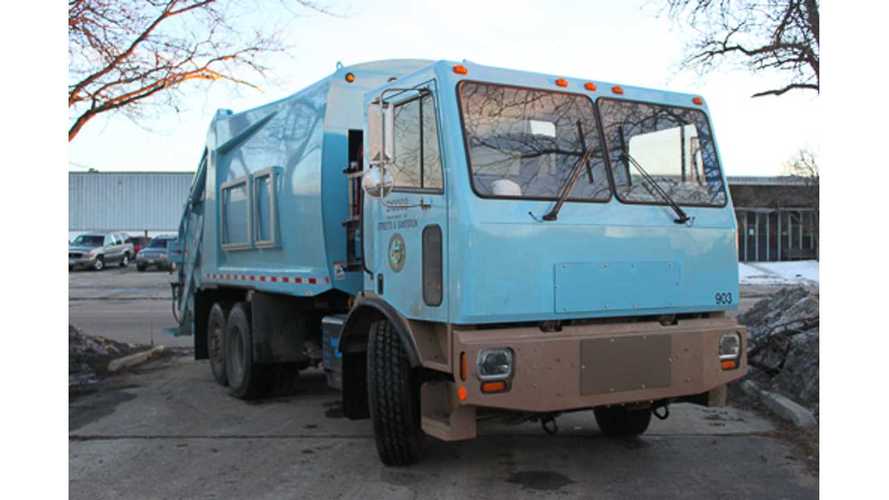 Garbage day just got a whole lot quieter for some Californians, as Motiv Power Systems has announced it will deliver the state's first (and one of just two operation in North America) all-electric garbage truck in Sacramento.

The Class 8 garbage truck will be built on a Crane Carrier chassis, and the body will be built by Loadmaster, replacing the old 2.8 mpg diesel version, eliminating emissions and noise for downtown Sacramento residents.

Motiv Power Systems doesn't specify the capacity and range details, but said that vehicle is required to repeat a route three times a day.

The e-garbage truck's battery consists of 10 packs (with option to extend to 12), and can be fully recharged overnight.

"Leading the way for cleaner fleets in California, the City of Sacramento will soon be home to the State's first all-electric automated left-side loader garbage truck. The fundamental technology powering the Electric Refuse Vehicle (ERV) is Motiv Power Systems' scalable and modular All-Electric Powertrain. The Class-8 vehicle will be built on a Crane Carrier chassis, and the body will be built by Loadmaster. The City of Sacramento aims to run the ERV on residential and recycling routes and expects to save as much as 6,000 gallons of fuel per year."

"Sacramento specified that this ERV must meet the demanding requirements placed on all of its garbage trucks. This includes three routes per day to remove trash, recycling and green waste in a downtown Sacramento neighborhood. To supply enough electricity to move the truck and power the hydraulics all day, the ERV is equipped with 10 battery packs, expandable to 12 packs if needed for future route expansion. Using the Motiv Universal high power Charger, the ERV batteries will easily reach full charge overnight."

The Motiv All-Electric Powertrain, installed on the Sacramento electric refuse truck, transforms a chassis meant to be diesel-powered to one with zero-emission all-electric drive, giving fleets an easier transition to a fossil fuel free future.

Mark Stevens, Fleet Manager for the City of Sacramento said:

"The City of Sacramento has a very pro-active sustainability policy, showcased by being voted the #1 Government Green Fleet in North America in 2013. Reducing harmful vehicle emissions in the Sacramento region is a primary focus of our Sustainability Policy, and the most effective way to achieve that goal is to implement electric vehicles into our fleet. We are excited to partner with Motiv Power Systems to design and build the first all-electric left hand automated refuse truck in North America. The City of Sacramento intends to prove that all-electric refuse trucks are the future of the industry, and we anticipate igniting that trend."

"The value of the City of Sacramento's zero-emission ERV goes beyond lower fuel and maintenance cost and strict payback. Reducing the amount of diesel-fueled refuse trucks in the city keeps communities safer from toxic diesel emissions. And, in addition to being cleaner, it's a quieter alternative to conventional trucks - a definite plus for those of us who appreciate peaceful mornings!"