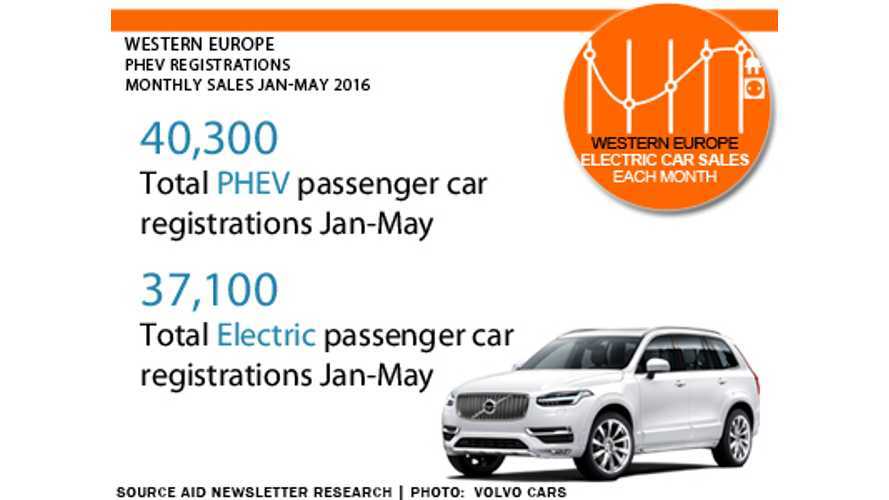 Relatively strong and fast growing all-electric car sales in Europe have recently suffered a shortness of breath, and have been caught by surging plug-in hybrid sales.

According to the latest data, PHEVs are already more popular than BEVs in Western Europe taking 52% of the plug-in segment overall (Jan-May 2016):

Worldwide BEVs still have advantage 58% - 42%. Our hunch for Europe is that it will end up at near a 50-50 split, as the "Tesla factor" will again come into play.  The California company delivered little in the way of new all-electric product in Q2 for Europe, selling some 75% of its vehicles at home over the thee months - a multi-year high in our estimation (perhaps distracted with fine-tuning and delivering of the Model X in the US).

For Q3 and Q4, that is about to change as the company looks to sell 50,000 EVs in the last six months, and already had 5,150 vehicles "in transit" to customers on June 30th - many of which are headed to Europe.

One of the countries making a big switch from mostly BEVs to mostly PHEVs is Norway.

"Sales of plug-in hybrids (PHEVs) in Western Europe continue to rise as both environment- and value-conscious consumers, thanks principally to the lure of tempting plug-in grants in some markets such as the UK, are now opting in growing numbers for the flexibility of todays PHEVs.

The latest AID survey shows that 5-months sales of PHEVs rose 43 per cent, thus accounting for a much-improved 0.7 per cent of the total West European car market at this year's 5-months stage.

Nowhere else is this more visible than in the sudden transformation of Norway's closely monitored car market.

In a sign of the times, in Norway's bellwether market the sales share of PHEVs pole-vaulted to 13.4 per cent so far this year, and during May itself PHEVs already outsold electric cars.

In consequence, Norway's May electric car sales share plunged to 11.1 per cent from 15.5 per cent a year ago"