All-Electric Car Sales In Western Europe Down 0.7% In May 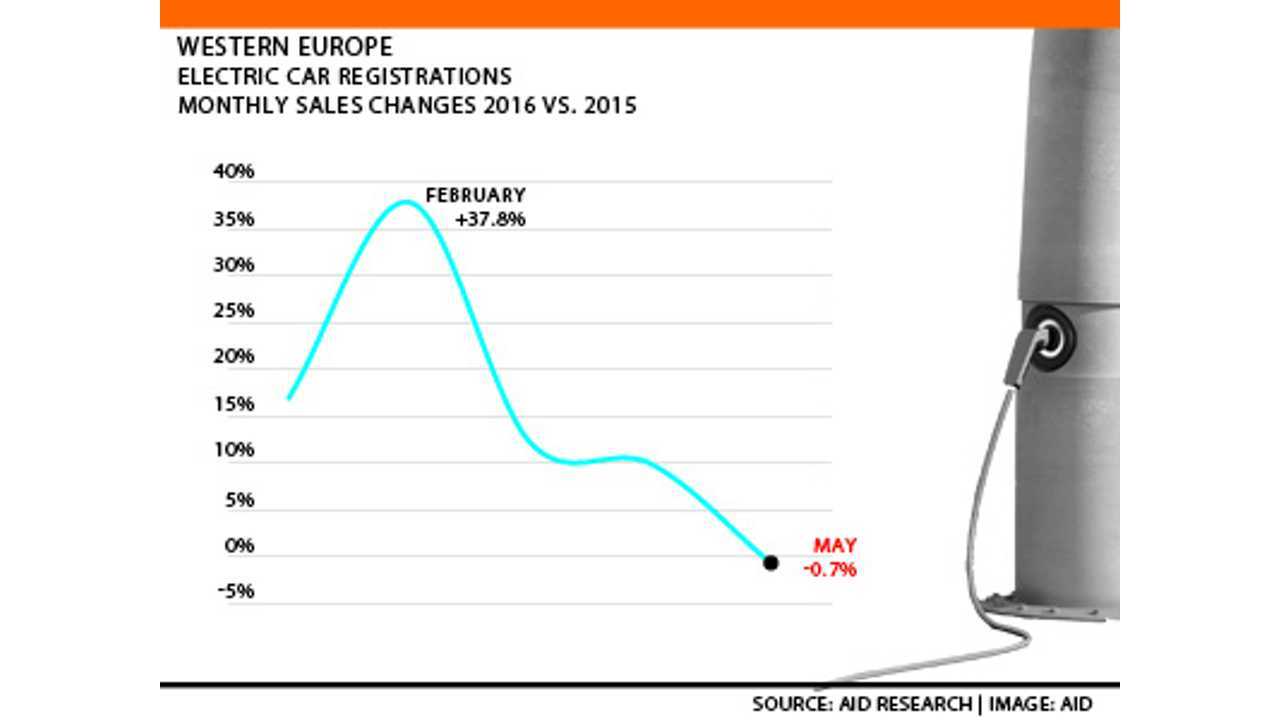 All-electric car sales in Western Europe decreased slightly in May (-0.7%) year-over-year to around 5,800.

BEVs apparently needed to take a deep breath after long-run of growth, because lower sales were reported in 10 out of 16 markets monitored by AID.

Perhaps some of problem could be attributed to the malaise for 'old, 1st gen all-electric cars' that has beset the US market now waiting on the next generation's arrival later this year, creeping into Europe.

But mostly, it is two specific (and very external forces) that are causing the downward pressure:

As always we enjoy sharing uber-pessimistic EagleAID's opinion on the plug-in situation as a contrarian viewpoint, and its monthly "analysis" which refuses to acknowledge any actual research into the 'why' behind the ups and downs of the market (who needs to mention PHEVs this month right?)

"Last month, Europes car buyers not only bought far fewer electric cars than expected, but to the dismay of an outwardly upbeat electric car industry, May sales of pure electric cars in Western Europe fell in ten of the sixteen markets monitored by AID every month.

Excluding plug-ins (PHEVs), West Europes Mays electric car penetration - curtailed by buyers fast-fading enthusiasm in Norway - eased back to 0.55 per cent from 0.63 per cent during the same month last year, according to AIDs exclusive monthly analysis.

Although Germanys dip in May sales was expected, the same cannot be said for a sudden shift into reverse in nine other West European markets.

Mays poor turnout was particularly disappointing for the industry because the month saw the fastest rise in overall car sales this year.

While none of that appears to have triggered any alarm bells at autoindustry headquarters, the same certainly cannot be said for an ominous looking change in consumer sentiment in Norway, long-seen as a bellwether of underlying consumer interest in electric cars.

The sudden swing in fortunes in Norway, where May sales of electric cars slumped by nearly a quarter, following a distinct loss of momentum since the start of this year, is potentially deeply worrying for the electric car industry."