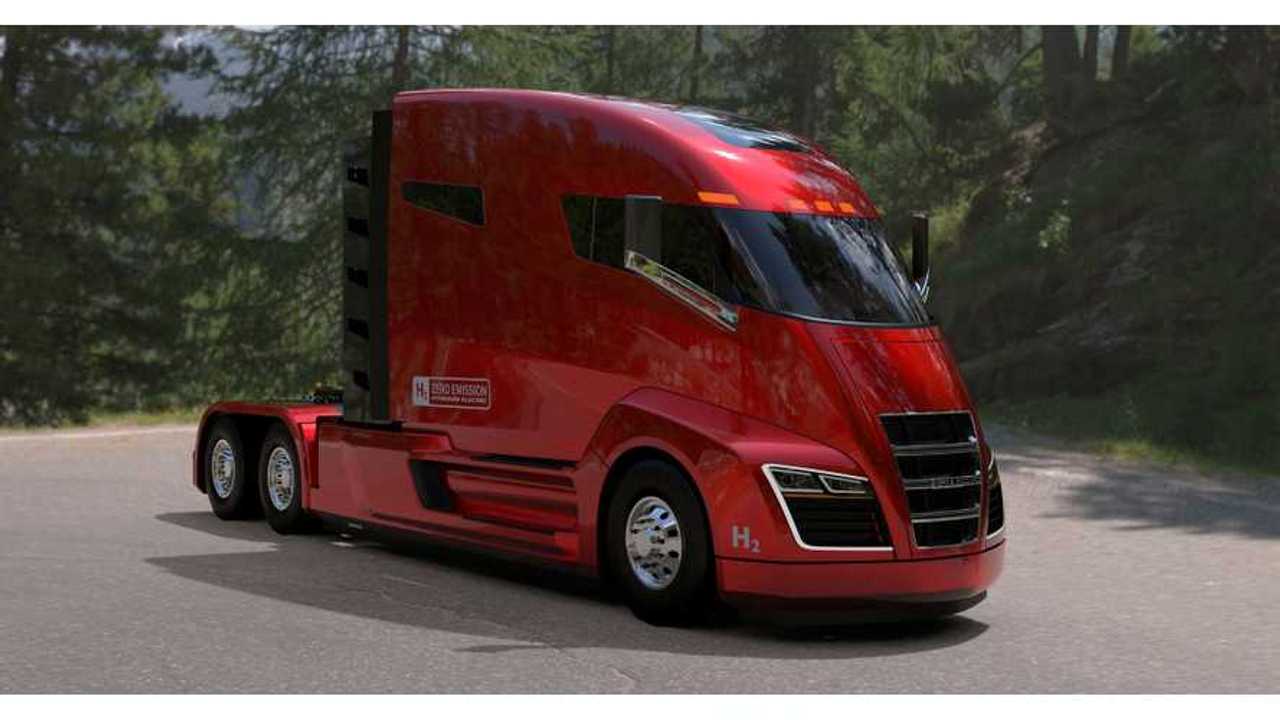 The Nikola Motor Company announced four months ago a class 8 zero-emission semi-truck, called the Nikola One.

The prototype is scheduled for unveiling on December 1 in Salt Lake City, but the idea seems to be well-received thus far, as Nikola says they quickly received 7,000 pre-orders.

Editor's Note:  We have not seen Nikola Motors disclose any of these pre-customers or the requirement needed for a pre-order.

According to the latest note from the company, pre-orders (if turned into sales) would pass 3 billion dollars.  Not bad for the startup that has, as of yet, only provided images of its vision.

The most important recent development is that the CNG range-extender on top of the 320 kWh battery, will now be swapped out in North America for a 800 V hydrogen fuel cell unit. The original CNG unit is now an choice for other markets with not-so-strong hydrogen infrastructures.  Perhaps the CNG version will also be a US/Canadian option still if requested.

Nikola Motors also states that some of the hydrogen infrastructure will be also build by the company, of which they would like to install a nationwide network of over 50 stations by 2020.

Hydrogen at these future station will be produced from electrolysis of water using solar electricity (the plan is to have more than 100 MW capacity at each station).

The Nikola One published specs state that the total range for the truck will be over 1,200 miles (1,900+ km), and that its truck will therefore never need to plug-in, although one still could in a pinch.

To us, hydrogen-fueled trucks have always sounded more rational than hydrogen cars (given the limitation of the total range vs available stations on non-major routes);  but then again, no one has ever actually brought vehicles and infrastructure like this to market, and one questions if Nikola is the right company (with deep enough pockets) to make it happen.

Today, Nikola is announcing that the electric drivetrain used in the U.S. and Canadian markets will be powered by a custom-built hydrogen-electric 800V fuel cell. Nikola’s hydrogen class 8 trucks will be more powerful than any other production diesel truck on the road and have a range of over 1,200 miles between fill-ups. It will achieve nearly 20 MPG with zero emissions under full load, surpassing all the government mandates set forth for the next 10 years, including the EPA’s recently announced Phase 2 GHG standards."

"More information will be announced about Nikola’s nationwide sales, service and warranty network in the coming weeks. Please see Nikola’s website for more information on the location of the future hydrogen stations. The CNG turbine version of the Nikola One will be available for other countries where hydrogen is not readily available."

“The desire to be 100% emission free in the U.S. and Canada is a critical piece of our long-term engineering and environmental efforts, not just in vehicle energy consumption, but also in how energy is produced. Nikola will produce hydrogen via zero emission solar farms built by Nikola Motor Company. These solar farms will produce over 100 megawatts each and will use electrolysis to create hydrogen from water. Even our manufacturing facilities will be run off of zero emission hydrogen energy,”.

“Nikola plans to have a nationwide network of over 50 hydrogen stations for customers to begin fueling by 2020. This will make Nikola Motor Company the first company in the world to be 100% emission-free from energy production to transportation to consumption. Say goodbye to the days of dirty diesels and after treatment in the heavy duty class 8 market,”.

We might argue that last point, as surely the "zero emission" solution from Tesla with its all-electric "semi transport project" - which is already testing today, and prototype to debut next year - seems closer to a reality than the Nikola One.
++