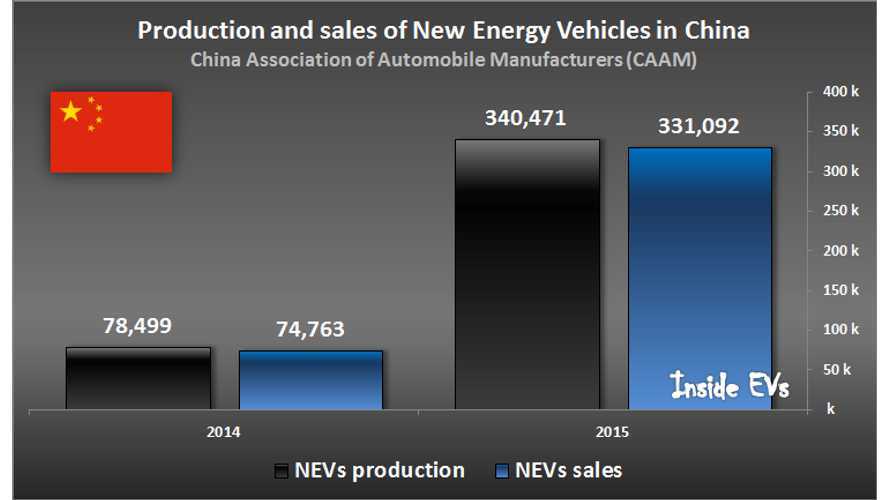 Automotive News recently published an extensive article about China’s electric car boom, in which many aspects of the growth is questioned by skeptics.

In 2015 production and sales of plug-ins (New Energy Vehicles) increased to over 330,000, out of a total of some 21.1 million vehicle sold. China is the largest, and one of the fastest growing markets, in the world for EVs, boasting nearly 150 plug-in models presented at the recent 2016 Auto China motor show.

The reason behind the tremendous growth is obviously the large incentives financial and non-financial (...we will call these dis-incentives for ICE vehicles, as sometimes an EV is the only quick way to register and use a car in large, smog-ridden cities).

According to the article, subsidies on NEVs has already reached $4.6 billion.

On the consumer perspective we have people like Song Yayun, a mild-mannered professor of ancient Chinese literature, who bought an electric car because it was quickest way to have a car (instead of awaiting for license plate lottery). Once bought, he had to charge the car from second floor of apartment building, and he considers pricing as still too high - even for lower-end models like BAIC EV200.

Nissan CEO Carlos Ghosn would seem to agree, saying recently that the Venucia e30 (aka Nissan LEAF) sales were disappointing, and his company needs to introduce lower-cost, lower-spec models (beside improving the LEAF).

"The consumer is not ready to jump into EVs,"

"We are disappointed," Ghosn said in Beijing. "For the moment, we have neither sales nor profits on electric cars. ... In China, we brought the car, but we're not selling it."

Incentives at the current stage are key in attracting consumers.

Manufacturers are now distressed, because with investing in the development of new plug-in models for China they also need to assume that the incentives will stay "as is" at least for several years more.  No sure thing at all.

"As an EV maker, you really have to watch for what the government does next. You could be spending a lot of money on these things and end up with vehicles that don't sell."

One of the interesting stories is with BYD, which has volume sales of pure electric and plug-in hybrid vehicles, combined with owning its own lithium-ion battery production to make profits on NEVs today.

"BYD's capability of selling volume NEV models and supplying others with EV batteries has already gained itself a good position in the competition," Shen said."