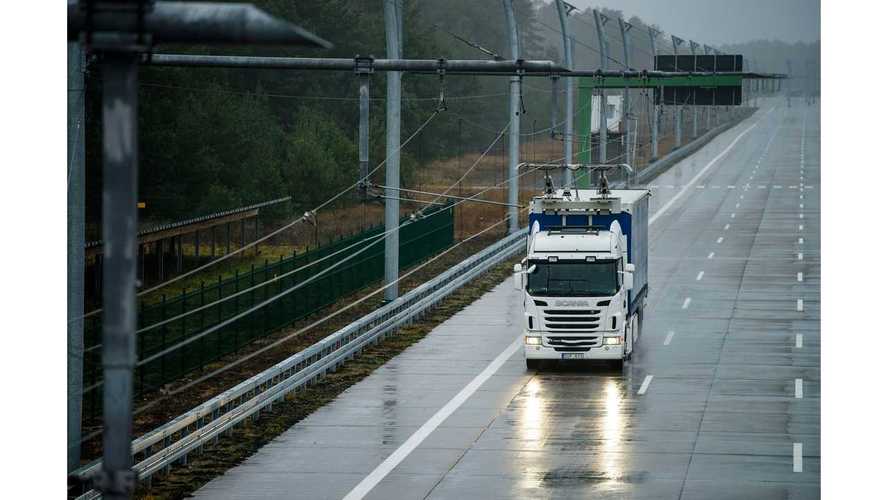 Scania truck fitted with a pantograph developed by Siemens

Scania announced a real-life test project on Gävle Electric Road of electrically powered trucks using pantograph developed by Siemens. The key difference to all-electric truck is of course there no need for a huge battery pack, but instead there is need for a catenary system and one standard to use it.

For about $15 million Scania will build a two-kilometer test route between the Port of Gävle and Storvik along European highway 16 in Sweden, which should be ready in February 2016.

The truck itself will be some kind of hybrid, which can operate without power from the grid.

This will be the first tests on public road after a few years of trials in a research facility outside Berlin.

"Power to the trucks is transferred from overhead lines through a pantograph power collector mounted on the frame behind the cab. This technology has been developed by Siemens, which since 2013 has conducted trials of electrified trucks together with Scania at its research facility outside Berlin.

The possibility of operating heavy trucks using electricity in this way means that the truck’s flexibility to perform transport tasks using electricity and as a regular hybrid truck is maintained, while up to 80-90 percent of the fossil fuel emissions disappear. Operating costs will be low as much less energy is required due to the efficiency of the electric engine, while electricity is a cheaper source of energy than diesel."

"Participants in the Gävle Electric Roads project include Gävleborg Region, Siemens and Scania as well as Boliden, SSAB, Sandvik, Stora Enso, Ernst Express, Midroc Elektro, Sandviken Energi, the Port of Gävle, Gävle Energi and the Stockholm School of Economics. The Swedish Transport Administration, the Swedish National Electrical Safety Board and the Swedish Transport Agency have also collaborated closely with the project."

Nils-Gunnar Vågstedt, who is responsible for Scania’s research in this field, said:

“The potential fuel savings though electrification are considerable and the technology can become a cornerstone for fossil-free road transport services. Electric roads are also a way to develop more eco-friendly transport services by using the existing road network."