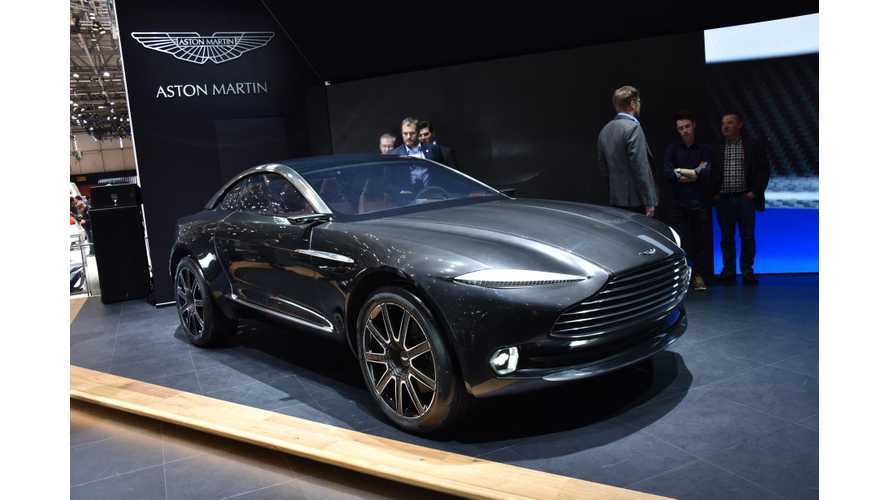 Q by Aston Martin: 'One of Seven

Aston Martin chief executive officer, Andy Palmer, was interviewed by Autocar and, as always is the case when Palmer talks, he threw out some interesting thoughts.

The British company doesn't want to do too much engine downsizing. Instead, Aston would rather go with electric and hybrid drivetrains, along V12s, V8s.

“I see in our future obviously V12s, V8s and probably battery-electric cars. As time evolves, there’s probably an inevitability to hybridisation, simply because, car by car, you can only downsize so much. I’d rather put a hybrid in there than an in-line four-cylinder.”

“Imagine something like a 4x4, 1000bhp silent Rapide. I think ‘Power, Beauty, Soul’ doesn’t say it has to be a gasoline engine. It just needs to be really powerful, really beautiful and set your heart on fire.”

“I’d argue that 1000bhp on the ground would probably do that for you. So that’s the route we could go.”

4x4, 1000bhp, silent and beauty? Sounds interesting. We already know that Aston Martin intends to introduce the electric DBX. Electric Rapide could be second around 2018.

The 102-year old luxury sports car manufacturer must however watch out on the business side of things. Producing only 7,000 cars annually "is no longer sustainable". Production volume must go up and the model line-up will be expanded.

“It doesn’t work as a business model. It hasn’t worked for Aston Martin, as we have been bankrupt seven times. We didn’t find the solution.”

“The DBX and Lagonda are part of that solution, but we can’t afford the multi-billion-dollar bill to engineer all of the active safety-connected car and autonomous car regulatory things that are coming along.”

“However, having that strategic relationship and the 5% ownership with Daimler gives us access to that technology. It works for Daimler and it works for us.”