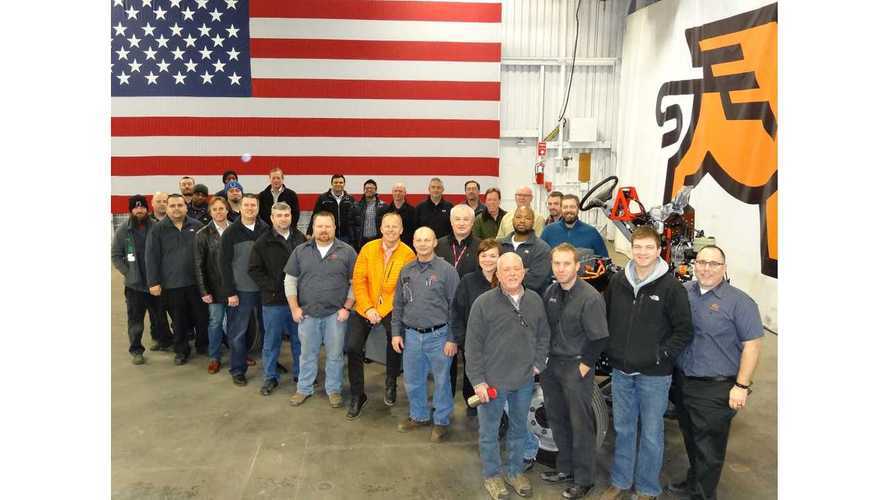 "Smith Electric Vehicles is pleased to announce we restarted our vehicle production line on Monday, January 5th, 2015 and completed Job 1 with successful "key-on" this morning. Some of the Smith team members gathered to celebrate this major mile stone in another historic chapter of Smith Electric Vehicles."

Work continues in Kansas City, Missouri and we assume that with FDG on board, orders from the large Chinese market will now keep things running.

The main product for Smith are the all-electric Newton truck and step-in vans.

Here is an update from Tanfield Group PLC, which holds 5.76% equity in Smith:

"Update on Smith Electric US investment

The Board of Tanfield is pleased to update the market on the progress of its Smith Electric US investment.

Tanfield is a passive investment company with two investments. The current holdings and value in invested companies are:

·     Smith Electric Vehicles ('Smith'): Tanfield Group holds 5.76% of the equity of Smith (excluding warrants). The carrying value of the holding is $10.73 million (£7.1 million). This represents approximately 5p per share.

·     Snorkel: Tanfield holds 49% of the equity of Snorkel LLP. The carrying value of this holding and its preferred interest holding (Loan note) is $60.1 million (£39.8 million) this represents over 27p per share.

Current Position:  Smith has provided Tanfield an update on its activities. The Smith Board has confirmed that the 2012, 2013, and 2014 audit reviews, required for its OTC reverse merger, are progressing as planned and due for completion in the coming weeks. The Board has also reported that production commenced on January 5th.  There are ongoing positive negotiations with strategic partners and potential investors to raise loan funds of approximately $20M. Strategic partner FDG has committed to funding of approximately $42 million, of which $13 million has been invested in the company.

The Board of Smith continue to pursue  its plan to complete the merger into ABSR and the filing of the super 8k required for its listing on the US OTC market. This will start the process of a full listing on a public US exchange, further details of which will be provided when appropriate.

Order Book and Enquiries: The business has an order book taking it through the first half of 2015 and continued positive enquiry levels for orders beyond that from its existing customer base and new customers in USA, Europe and Latin America.  Federal Government, State and city subsidies for electric vehicles are prevalent with California providing up to $65,000 per vehicle.

Operation and Supply Chain :  . With the restart of production the company has transitioned a majority of its supply chain to realize cost savings, as well as enhanced manufacturing quality, reliability and capacity.  Critical to the activity of reduced manufacturing cost is the company's strategic relationship with FDG (Hong Kong listed lithium battery and Electric Vehicle manufacturer). The supply of batteries from FDG at substantially lower cost is expected to be implemented in 2015.   As the battery constitutes over 40% of the cost of the vehicle this would have a major impact on the cost of the vehicles and the transition to a sustainable positive gross margin   of the Smith vehicle."