Used car prices have been at record highs for a time, but prices are starting to level off, aside from EVs.

Recurrent has just published its September 2021 Used Electric Car Buying Report. While there's a whole lot of information in the report worth sharing, and we encourage you to follow the source link below to check it all out for yourself, there are three primary takeaways that deserve your attention.

Recurrent reached out to InsideEVs to let us know that used car prices are finally beginning to drop. We saw major inflation on the used market over the course of the summer, which was the product of a multitude of factors. However, as Recurrent points out, the market is starting to cool down, and prices are leveling off, though that's not yet true for electric vehicles. In fact, used EV prices may continue to rise going forward. 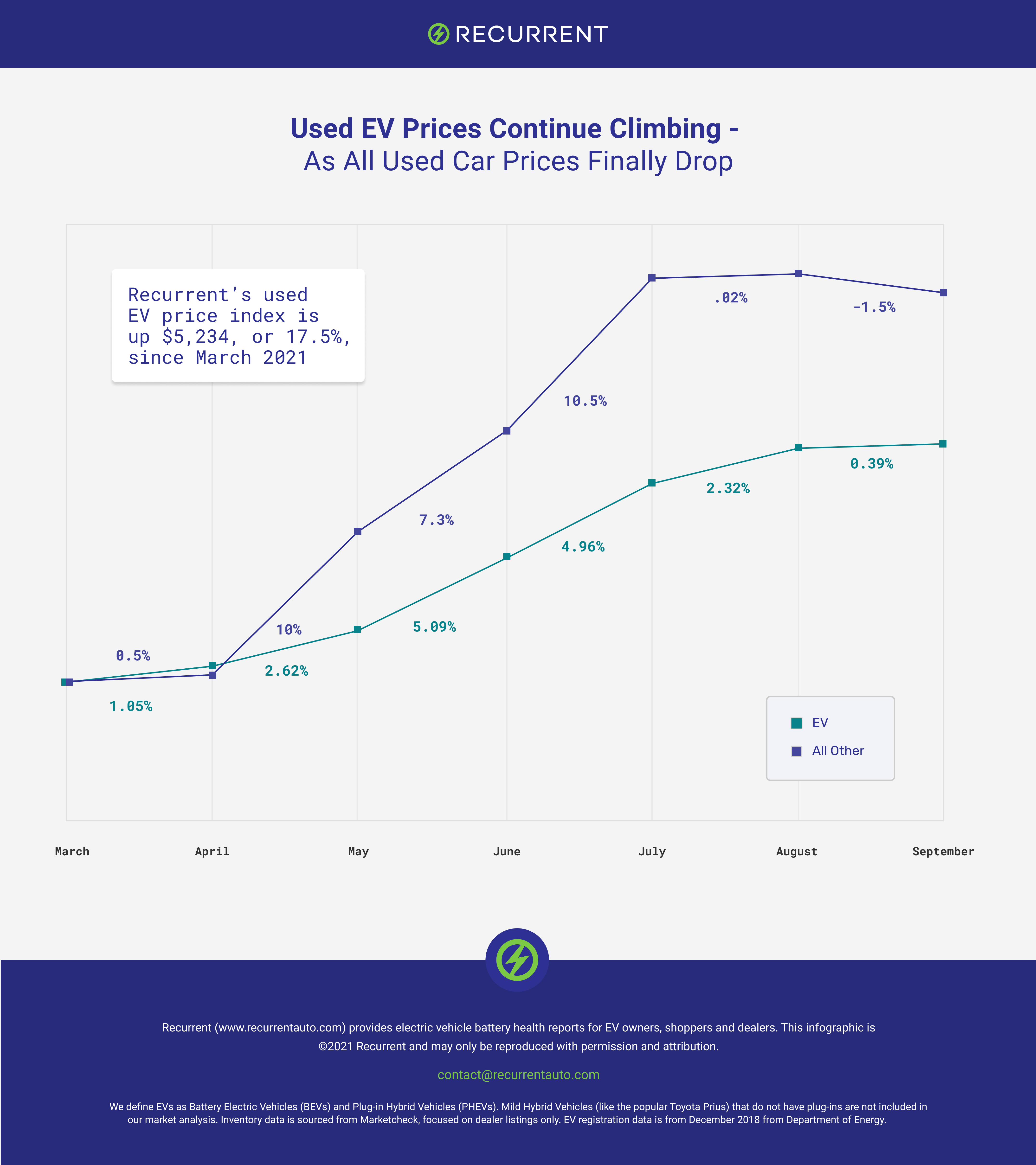 Used EV prices have climbed just a bit from August to September, though Recurrent says the increase is well under one percentage point (-0.39%). Pricing for all other cars dropped slightly (-1.5%) during the same time period. Overall, used electric car prices are up a whopping 17.5 percent since March 2021. The price bump since pre-pandemic levels is even greater.

Nonetheless, the publication says about 50 percent of used EVs are still priced below $25,000. Recurrent says automakers are planning to bring "workhorse" EVs to market that will start around $25,000 when new, which should cause a surge in . The firm's research suggests that car shoppers pay close attention to "out the door" pricing, and a new $25,000 EV could cost much less if it's eligible for tax credits.

Finally, Recurrent mentions that, despite the rising prices, used EV inventory has plummeted over the last six months. The top EV states have seen inventory drops of at least 35 percent, though some are down as much as 63 percent since March 2021. Dealerships are struggling to find used electric cars to replace those recently sold. Recurrent says some dealers are going so far as to call former customers to try to encourage them to sell back or trade-in their cars.

Best Used Electric Cars Under $20,000
⠀ Ready To Sell Your Used Tesla For A Big Profit? These Owners Did

Be sure to click on the source link below for Recurrent's full September report, which is complete with multiple charts/graphs highlighting the takeaways.