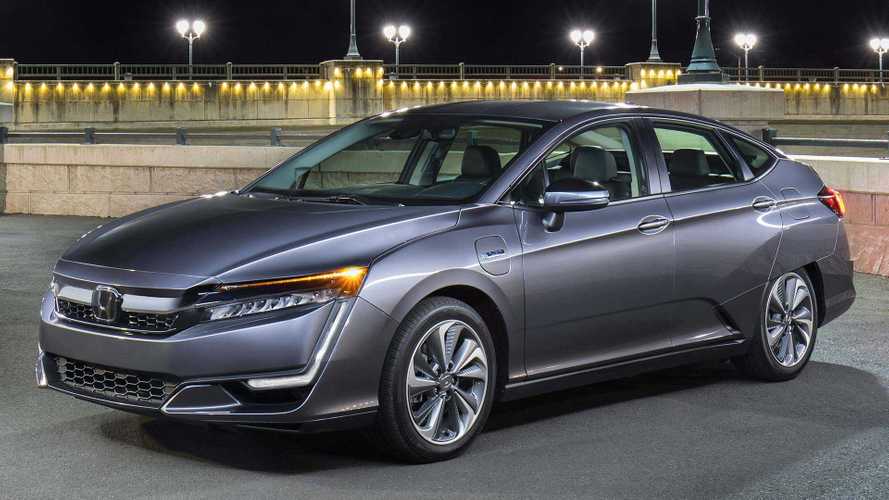 After 30 years, Honda is still not ready to commit to battery-electric vehicles.

Honda started developing electric vehicles more than 30 years ago. In those three decades, the Japanese automaker made strides with battery-powered cars. But with each step, Honda reconsidered the potential of EV technology – and shifted its strategy away from pure EVs and toward hybrids. All the while, the company placed its biggest bets on the ever-receding future of hydrogen fuel-cell vehicles.

Honda continues to take a portfolio approach to EV technology. That’s evident from its Clarity line of vehicles now on sale. It uniquely offers a choice of a plug-in hybrid, pure EV, and hydrogen fuel cell.

In late 2018, the Clarity Plug-in Hybrid became the top-selling PHEV in the United States. With its success  – and Honda again promising new upcoming electric cars – let’s consider the company’s EV history and what the future might bring.

A team of four Honda engineers gathered at the company’s R&D center in April 1988. The turn of the century was still a dozen years away, but the team was already considering which technology held the most promise for the 21st century. “Electric operation was the most likely candidate in terms of alternative power,” said Junichi Araki, who led Honda’s first EV research team.

The team, which had no experience in EV-related technology, had doubts if batteries could provide enough energy for decent range. Using a stripped down Honda CR-X and then a three-door Civic, the team built a series of prototypes that were presented to the company’s management team by October 1990. “At that meeting, I was convinced to continue the full-scale development of electric vehicles," said Takefumi Hiramatsu, a research director. The team grew to 100 members.

The timing was good. A month earlier, the first zero-emissions vehicle mandates were established by the California Air Resources Board. To sell cars in California, two percent of those purchases had to be zero-emission vehicles by 1998, rising to 10 percent by 2003. The race was on.

After a series of rough prototypes emerge, Honda was able to exhibit the EV-X at the 1993 Tokyo Motor Show.  It was Honda’s first purpose-built electric car.

That was followed by the CUV-4, an electric conversion of a Civic. A total of 10 cars were put on California roads for testing. Concerned about the durability of lead-acid batteries, Honda took the bold step of using nickel-metal hydride batteries, the first car company to make the switch.

Based on 80,000 miles of real-world testing, Honda’s president Nobuhiko Kawamoto gave the go-ahead in January 1996 to create an original body design for Honda’s EV. In April 1997, newspaper reporters and television crews assembled at Takanezawa plant, Honda’s manufacturing facility for specialized small production runs. The cameras captured a single small unit of the EV Plus rolling off the line.

“There still are many issues at hand, including the battery,” said Kenji Matsumoto, head of the company's development project. “But I can definitely sense the coming age of the EV.”

The E.P.A. gave the Honda EV Plus a range rating of 81 miles – an achievement for the era. Power was modest at 66 horsepower and a top speed of about 80 miles per hour. The four-passenger compact was about a foot longer than today’s BMW i3 and 1,000 pounds heavier.

The EV Plus’s surprising sticker price was $53,900, but Honda would only allow the car to be leased – at $455 a month for three years. Nonetheless, Honda found more than 100 customers in 1997, one year ahead of the California mandate’s deadline. However, 1998 California was already loosening its zero-emissions targets to include hybrids.

Honda produced and leased a couple hundred more EV Pluses in the following two years in California – and a handful in Japan and Europe. But with California regulators allowing hybrids to get ZEV credits, the pressure was off to sell a pure EV.

On April 26, 1999, Automotive News reported that Honda had produced its last EV Plus and the “arrival this fall of Honda's VV hybrid car hastened the end of EV Plus production in Japan.” The VV was the concept version of the Honda Insight hybrid. The company reclaimed and eventually destroyed its first EV.

The Shift to Hybrids

“We had limited production goals in mind from the beginning for EV Plus,” said Robert Bienenfeld, manager of alternative fuel vehicles sales and marketing for American Honda Motor Co. “It was not meant to be mass-market material. The real question, if we were to keep selling the EV Plus, would be, ‘Are we moving forward? Are we advancing the technology?’ And the answer would be ‘I think not.’''

Compared to the limited production numbers for its first EV, Honda said that it would sell 5,000 Insights worldwide every year. The company’s shift from EVs to hybrids and fuel-cell vehicles became the strategy for the ensuing decades. Honda introduced the FCX Clarity fuel-cell sedan in 2006. By 2008, a couple of dozen California consumers were leasing the hydrogen-powered car.

EV development was still simmering in the background. Tomohiko Kawanabe, Honda’s president of research and development, in 2010 said: "We are definitely conducting research on electric cars, but I can’t say I can wholeheartedly recommend them. It's questionable whether consumers will accept the annoyances of limited driving range and having to spend time charging them.”

A Toe in the Water

The Honda Fit EV was unveiled at the 2010 Los Angeles Auto Show.

Against a background of rising fuel-economy standards, Honda unveiled an all-electric version of the Honda Fit at the 2010 Los Angeles Auto Show. Honda committed to making just 1,100 units over a 20-month period. Again, it was only available for lease.

The small yet spacious five-passenger Fit was equipped with a 20 kilowatt-hour lithium-ion battery pack providing an estimated range of 82 miles. When placed into Sport mode, the Fit EV’s dashboard took on a red hue and upped its output to 123 horsepower and 189 pound-feet of torque. Compared to the popular EVs at the time – the Nissan Leaf, Mitsubishi i-MiEV, and Smart ED – the Fit was the most fun to drive.

Matt Walton received delivery of the first Honda Fit EV on July 20, 2012, at a dealership in Woodland Hills, Calif.

The lease price was set at $389 a month and then dropped to $259, creating waiting lists at dealerships in California, Oregon, New York, New Jersey, Massachusetts, Maryland, Rhode Island, and Connecticut. But 20 months after Matt and Becky Walton received the first Fit EV, Honda announced that it had reached its sales quota and production would end earlier than expected.

The Fit EV was not the only plug-in car produced by Honda in the early to mid-2010s. For three years, from 2013 to 2015, the company sold about 1,100 units of the Accord Plug-in Hybrid. The plug-in Accord was a spacious and capable mid-size sedan selling for $40,450. It offered 13 miles of all-electric range via a 6.7 kilowatt-hour battery pack. But unfortunately, the batteries were packed in the trunk where it reduced cargo space down to 8.6 cubic feet.

The Honda EV-ster sports concept was displayed at auto shows throughout the world.

In this period, Honda also introduced a series of funky concept EVs, including the 2009 EV-N retro-commuter, 2011 Micro Commuter mobility pod, and the bizarre 2016 NeuV that supposedly was capable of reading human emotions. The gem in the bunch was the 2011 Honda EV-Ster. The two-seat sports car, reminiscent of the classic Honda S2000, provided about 100 miles of range. It scooted to 60 miles per hour in about five seconds. (Honda revealed an updated EV sports concept in 2017.)

With sales of the Honda Accord Plug-in Hybrid dwindling to a few units per month, Honda showed up at the 2015 Detroit auto show with yet another concept: the FCV. From 2008 to 2014, Honda had leased a total of 46 FCX fuel-cell vehicles so the FCV looked like it would be the next iteration of a hydrogen car. But then Honda announced there would be battery-electric and plug-in hybrid versions of the Clarity by 2018.

Deliveries of the Clarity Fuel Cell began in Southern California in December 2016. Those were followed by the launch of the battery-electric Clarity in August 2017, and the plug-in hybrid version four months later.

While the fuel-cell and battery-electric variants are available only for lease in California (plus Oregon for the EV), the Clarity Plug-in Hybrid is a 50-state vehicle. Sales of the fuel-cell Clarity are limited by lack of availability of hydrogen stations, and the Clarity Electric is hobbled by offering only 89 miles of range on a single charge.

However, the 2018 Clarity Plug-in offering 48 miles of all-electric range is a real contender. With the discontinuation of the Chevy Volt, the Clarity becomes the plug-in hybrid with the most all-electric range. It also claims a place in the market as a spacious mid-size sedan that provides more than enough electric range for daily commuting – and then it becomes a 42-mpg hybrid without range limitations.

It’s currently the largest sedan sold by Honda. Unlike the Accord Plug-in Hybrid that preceded it, there’s no compromise on cargo space.

These superlatives help explain why the Clarity Plug-in hybrid became the number one selling PHEV in December 2018. The base-level Honda Clarity Plug-in Hybrid starts at $33,400, not including a $7,500 federal tax credit. The Touring trim, which starts at $36,600, adds goodies like leather seats and navigation.

It’s easy to dismiss the other two Clarity versions. Yes, the fuel-cell offers an impressive 366 miles of range in a five-minute fill-up, but availability is limited to a few dealerships in California. The Clarity Electric, which leases in California and Oregon, has a compelling price of $199 a month. But its 89-mile range is a non-starter for most buyers.

That leaves the Clarity Plug-in Hybrid, which could be a leader in the space for a few years.

Honda continues to set meaningful goals for electrification. In 2016, Takahiro Hachigo, Honda’s chief executive, said Honda hybrids and other electrified vehicles would account for two-thirds of sales in Europe by 2025. Battery-EVs and fuel-cell cars are expected to represent 15 percent of Honda’s electrified cars, said Hachigo. (Today, Honda sells two conventional hybrids, the Accord and Insight.)

The Honda Everus at the 2018 Beijing Motor Show

That explains why Honda unveiled the Everus all-electric concept at the 2018 Beijing Motor Show, followed by the Everus VE-1 production version at the Guangzhou Auto Show in November. Think of the VE-1 as a curvier all-electric version of the conventional HR-V crossover with an aerodynamic fascia and charge port.

Nikkei’s Asia Review reported that the Honda-CATL partnership is expected to yield an all-electric version of the Honda Fit offering about 185 miles of range. Notably, Honda intends to sell 100,000 of the new Fit EV a year.

Honda continues to roll out exotic EV and energy concepts, including next-generation ultra-fast charging, battery-swapping scooters, and a vehicle-to-grid system. But Honda’s most tangible plan is to put its Urban EV concept into full-scale production. The Urban EV, which was unveiled at the 2017 Frankfurt Motor Show, bears a resemblance to the EV-N concept that Honda revealed a decade ago.

The cute and curvy all-electric concept was spotted (in four-door hatchback form) in testing in late 2018. Those sightings give credence to Honda entering production of the Urban EV as soon as 2019 – but probably only for the European market. Few details are known at this time, but there’s speculation that the Honda Urban EV will provide 200 miles of range using an entirely new dedicated electric platform.