Almost 70 percent of all Level 2 semi-autonomous driving crashes from 2021 that the NHTSA in the US involved Teslas.

The National Highway Traffic Safety Administration (NHTSA) just released figures for the number of car crashes that involved vehicles equipped with advanced Level 2 driver assistance systems (ADAS) and they most commonly happen in Teslas. Out of the 392 accidents documented by the NHTSA has having taken place , 273 involved Tesla vehicles, which equates to 69.7 percent out of all events.

Now while that may sound pretty bad, it actually isn’t when you see the bigger picture. Data was provided to the NHTSA by 11 automakers, and in next place for number of Level 2 ADAS accidents is Honda with 90 crashes, followed by Subaru with 10 crashes. 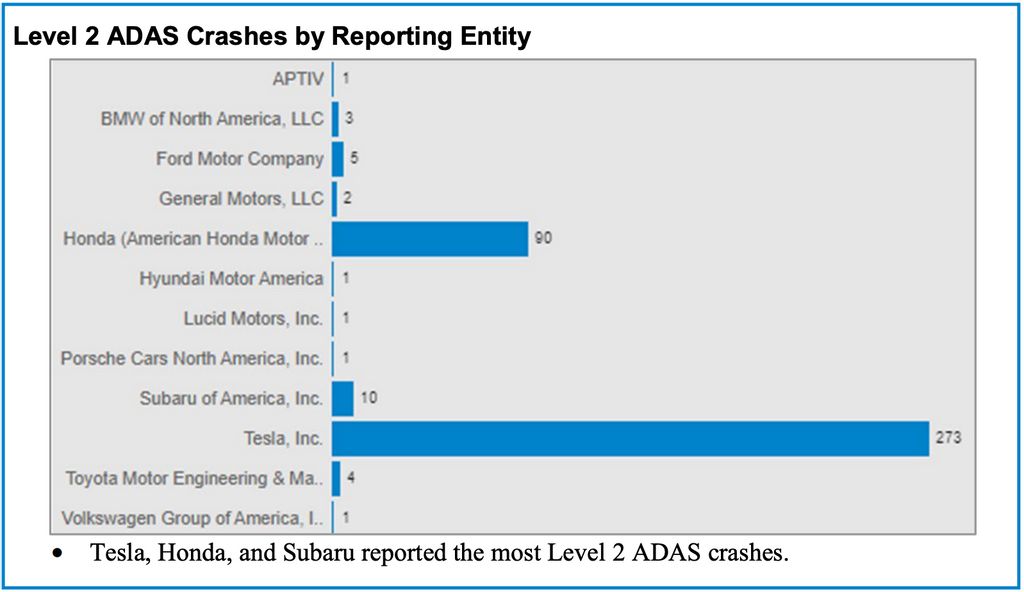 Overall, all these 392 crashes resulted in six deaths and five instances of severe injuries, both of which are very small number given how many accidents occur each year in the US - the NHTSA notes that almost 43,000 died in car accidents in the US last year.

It’s also worth noting that all of this data compiled by the NHTSA is self-reported by the manufacturers, so there is a chance some companies may not be entirely truthful, so as not to put themselves in a bad light. The safety agency makes it clear in its report, though, that these numbers shouldn’t be taken at face value and that more analysis based on them is required before drawing conclusions.

And the reason why so many of these accidents were in Tesla vehicles probably has something to do with the fact that people who drive these vehicles probably rely more on the semi-autonomous driving component than people driving other brand cars. Tesla makes a big deal out of its Autopilot and Full Self-Driving systems, more so than other automakers, and this may make people more willing to use these systems than in another car where they are not as big a part of the appeal.

However, even if Tesla's self-driving tech is some of the most advanced in the industry, a series of high profile incidents that resulted in fatalities brought a lot of negative press to the automaker, as well as a probe by the NHTSA. Currently, Tesla is being investigated for the 'phantom braking' phenomenon, as well as Autopilot, with the latter stretching to include some 830,000 vehicles that could be affected.