Italy continues to up its EV market share while gas cars are losing steam.

It’s yet another month of positive news for electric mobility throughout Europe, and Italy – the continent’s fourth-largest market – is no less in scoring high EV gains in the midst of a global ICE meltdown.

October figures released by Unrae portray a renewed picture of pain for the Italian car market. With less than 103,000 registrations, this month marks a worrying 35% drop from the almost 159,000 units sold over the same period last year. The ongoing chip shortage is certainly to blame for most of this shortfall, although several dynamics may be at play.

Traditional ICE powertrains take a shocking hit year-on-year (YoY), as petrol and diesel models are down by a whopping two-thirds in total registrations for the month, stopping at 25.8% and 18% market share respectively. Full and mild plugless hybrids are quickly replacing both as the default choice, with a record 35.2% share, a figure that is soon enough destined to be boosted to new heights by the ongoing downfall of non-electrified powertrains. 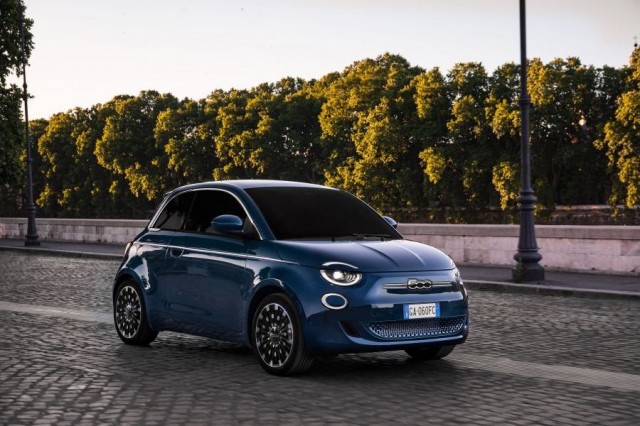 Fully electric cars score 7,134 registrations, a great figure for a start-of-quarter month and worth around 7% of the market, not too distant from the fresh September record of 8%. This means an impressive 146% increase YoY from 2,900 units a year ago, in what was also a much healthier market. If this month’s result is anything to go by, we could expect even more surprising numbers and new records in the last two months of the year as carmakers push to maximise deliveries, including Tesla with not one but two models now making numbers (see stats up to Q3 here).

Plug-in hybrids also have a good month, although in slight retreat from previous records. With 5,123 units, they reach a 5% market share and a less eye-catching but still solid 40% YoY growth. Whether the tide has definitely turned back in favour of BEVs is still to be confirmed, but a mix of chip shortage and tactical decisions by automakers may be the deciding factors in whether PHEVs will slowly fade back or keep growing at a similar pace to full electrics.

Combined registrations for all plug-in cars thus touch 12%, the second-best performance to date and closing in on once-popular diesel powertrains, which are bound to be overtaken in the near future. In a month of such highs, which models are the top contributors? October’s Top 10 BEV chart shows new trends consolidating. 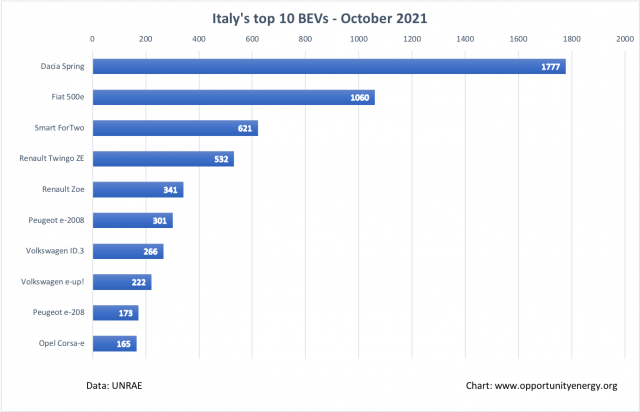 For the second month in a row, Dacia Spring scores a monster result, taking the top spot with 1,777 registrations, its second-best monthly performance to date (and also of any BEVs) following September’s record 1,876 units. At a wide distance, Fiat 500e settles for second place with 1,060 units, a position it is likely to hold in coming months, too if the much cheaper Spring keeps delivering without interruptions. The ever-present Smart ForTwo closes the podium with 621 units.

In this Tesla-starved month, A- and B-segment BEVs fill the ranks. Renault takes fourth and fifth place with Twingo ZE and the Zoe (532 and 341 registrations respectively), which are now regularly out of the podium. Peugeot’s small crossover e-2008 follows closely in the sixth position with 301 units, ahead of the only C-segment model in the chart, the VW ID.3, in seventh place with 266 registrations and unable to pick up pace as it is doing elsewhere in Europe. VW e-up! takes the eighth position, ahead of siblings Peugeot e-208 and Opel Corsa-e which close a very familiar chart in ninth and tenth place.

As we head towards the final rush in this important year for electric mobility, BEVs keep making gains as the broader car market faces an unavoidable crunch in the face of the chip crisis, leading non-electrified powertrains to an earlier than anticipated demise. A trend that seems to be common throughout Europe. Will the last two months of 2021 bring in new electric records or will present shortages finally catch up with EVs too? Carmakers are facing tough choices, which are likely to define their electric success (or failure) sooner than many realise.