The company quickly spreads its series-hybrid tech to more models, making it "a key pillar of its electrification strategy."

Nissan announced that the cumulative sales of cars, powered by its e-Power series-hybrid (non plug-in) powertrain, has exceeded 500,000 in Japan (as of the end of March 2021).

We would not bother much with the conventional hybrids, but it seems that Nissan is now at full speed shifting its efforts towards e-Power hybrids, which became "a key pillar of its electrification strategy."

The Japanese company is simply focusing on products that sell in higher volume. The e-Power first debuted in the Nissan Note in November 2016 to become the top-selling car in Japan in 2018. The e-Power turned out to be quite popular and accounts for about 70% of the Note's volume.

In May 2018, the Nissan Serena minivan also received an e-Power version. Then the Nissan Kicks in June 2020 and the second-generation of the system debuted in the new Note in December 2020.

Nissan is now busy expanding the e-Power lineup in Asia. Soon, the powertrain will be introduced in China. In Europe, the e-Power is available in the all-new Nissan Qashqai.

That's quite an offensive (500,000 units in over 4 years in Japan and multiple models), compared to the single Nissan LEAF model (with additional Nissan e-NV200 van) over a decade. The cumulative sales of the LEAF in Japan stand now at almost 150,000.

The all-electric Nissan Ariya is coming too, but it's the only new BEV we heard of so far from Nissan, which makes an impression that the main focus is on the e-Power.

With the series-hybrid setup, Nissan probably will be able to significantly lower its average emission of new cars and gain some time.

It's actually not a bad idea, as the e-Power cars should drive much better than the conventional ones. 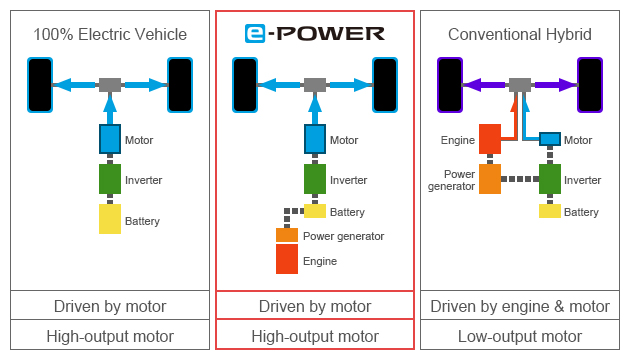 The main question is when Nissan will be willing to invest more in battery-electric again? Our guess is that the company will closely evaluate how well the Ariya is received. Nissan also has to strengthen its financial position so, in effect, we might see several years of a major hybrid rush, before any significant new all-electric wave.

The e-Power might also soon evolve into a plug-in hybrid setup, as all it needs is a larger battery and a charging inlet. It would be funny to see a Nissan PHEV like that, long after the grandpa Nissan LEAF was competing with the Chevrolet Volt in 2010/2011.