Germany: A5 Autobahn Gets Catenary Overhead Lines For xEV Trucks 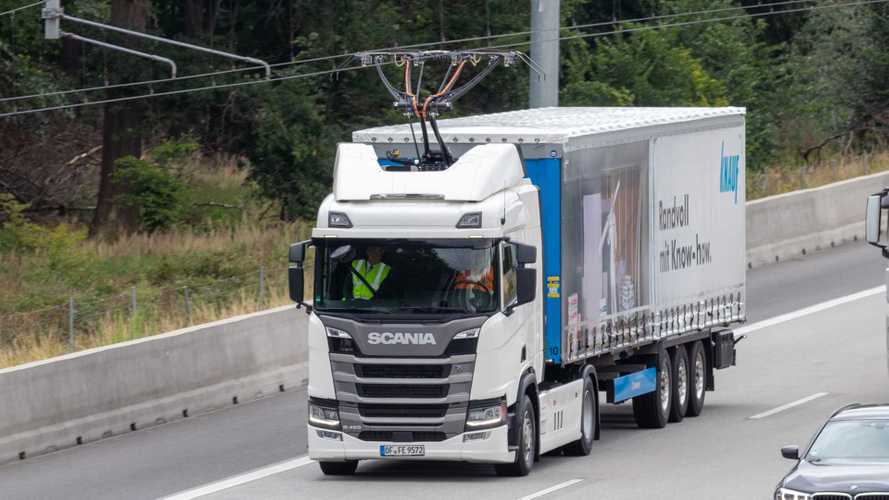 One more trial of the e-highway for electrified trucks was recently started in Germany.

Electrification of transport has many faces and the automotive industry is exploring various paths to increase the share of electric miles in long-distance travel, but not necessarily by switching to full BEVs with huge batteries.

This summer, a new 5 km (3.1 mi) e-highway test track with catenary overhead lines (in both directions) entered service on the A5 Autobahn in Hessen, near Frankfurt in Germany. It's part of a three-stage project announced in 2018.

The idea is to use a power supply, kind of like in the case of trains or trams, to drive on the highway using electricity, and then to switch to battery power or internal combustion engine for the final miles. That's the theory. The major obstacle is the cost of €2 million per km (in both directions) - according to a report from Sweden (see video below) - and further costs of maintenance of the new infrastructure. Another thing is that it does not look too attractive.

"With all five trucks now in daily traffic along the five-kilometre electrified segment on the A5 motorway, data will be collected for several studies to examine the benefits of e-roads."

The future of commercial use depends on the results and feedback from fleets. It would have to be vastly positive to think seriously about broader implementation, as the battery-electric trucks are getting better and better.

Here is a trial operation in Sweden (launched in 2016):