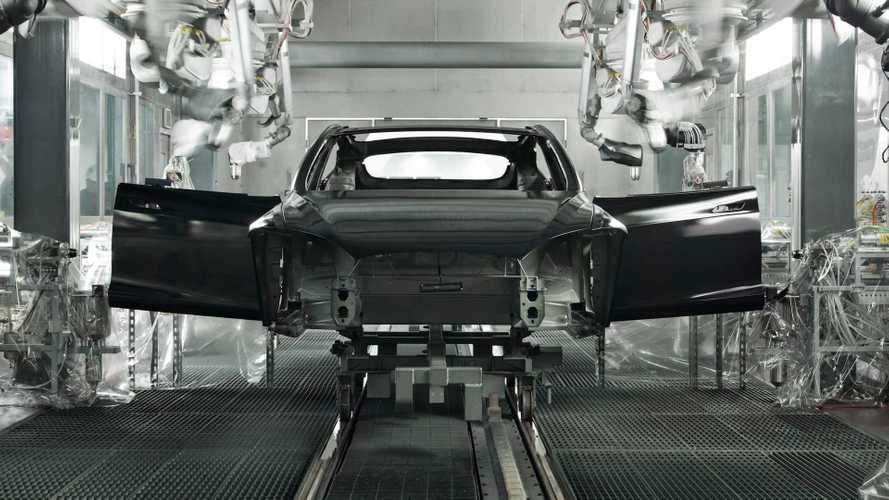 Or is Tesla just making sure the paint shop works as it should?

The COVID-19 pandemic may have slowed many businesses, but InsideEVs has not changed its fast pace. So fast that we sometimes miss what other writers report. When we spoke about Elon Musk's tweet on the "world's most advanced paint shop," I had not read another article we published a week before. It mentioned permits to change Fremont's paint shop and body-in-white lines. Now, Tesla filed for more permits related to that. Will Fremont get the "world's most advanced paint shop" before Giga Berlin?

That would make a lot of sense. If Tesla already has the blueprints for such a paint shop, why not apply it to Fremont? Is there any reason to save it for a plant that does not even exist so far?

Fremont Is Closed: Will It Get 'World's Most Advanced Paint Shop?'

Fremont produces cars for the US market, Tesla's first and still largest one until China takes the lead. And the plant is reportedly halted due to the COVID-19 since the end of March 23. Demand is also on hold. What most convenient time Tesla will have to do these upgrades?

Gallery: Will Fremont Get The 'World's Most Advanced Paint Shop' Before Giga Berlin?

The most recent permits relate to additional ventilation efforts and fire fighting measures, but they cover much more. Tesla asks the city of Fremont for grants regularly, but they seem to have become more frequent after what the company named as 4.5 Expansion. It started with the plan GA4.5, submitted to the city of Fremont on February 27, 2020.

On March 6, Tesla filed the BLD2020-05257, called "Tesla - 4.5 expansion." The project description was: "Civil sets that include site improvements and foundations."

The paint shop plans are not the only ones. The permits speak about installing new forklift chargers. Part of these forklifts must be AGVs, or Automated Guided Vehicles, mentioned in BLD2020-05459.

A large number of these permits indicate new sprinklers and other measures of fire prevention are part of that expansion, but the ones citing the paint shop give us the impression that the plans for it are the most important.

Elon Musk said in 2018 that paint was a bottleneck. That may have led the company to speed up the process, delivering vehicles with defective paint jobs, such as the ones many Model 3 owners are facing. So far, we had no idea why. The permits appear to shed some light on that.

AMR is a reference to something the city of Fremont calls Alternative Methods And Material Review. The AMR2020-00008 – in the main image of this article – has this description:

“Proposed spray booth uses electrostatic spray application equipment for the paints, requiring a minimum required air velocity of 50 FPM per CFC 2404.7.3.2 Exception 1. Based on the calculations provided by the paint booth engineering design team (Durr Systems Inc.), the average air velocity across opening in the paint booth is 20 FPM.”

We are not painting specialists but Google helps us understand what this is about. FPM refers to linear feet per minute of airflow inside a spray booth.

According to an article at the website BodyShopBusiness, the minimum number sits at around 40 FPM to 50 FPM. The more airflow, the faster the paint can dry. If the airflow is too slow, you may get dieback, which is having solvent trapped in the paint because the top of the paint film dried first. If the spray booth at Tesla gets 20 FPM, dieback is probably a given.

Another AMR – AMR2020-00007 – points to another possible issue. Here is what the project description says:

“The proposed paint booth planned as part of the renovations to the South Paint Building is larger than the code limitation; the paint booth is currently sized at approximately 4,000 SF compared to a maximum size allowance of 1,500 Sf.”

Apparently, Tesla wants a new paint booth at the "South Paint Building." It wants it to have 4,000 ft², but possibly it will only be able to dedicate 1,500 ft². If there is a South Paint Building, would there be other buildings for paint? The FSP2020-00420 refers to a "South Paint shop K rails and obstruction sprinkler install."

Unfortunately, only the company itself or employees familiar with the plans could tell us more about them. The employees have to sign an NDA – non-disclosure agreement. Tesla does not speak to the press.

That means we need help to tell this story. We ensure you Tesla will not know who you are should you have something to say. We did that before with the Lathrop employees that were concerned with their risk of getting COVID-19 infection at work.

What we need to know is what these paint shop improvements involve. Does it have to do with size? With air velocity? Will Fremont get the "world's most advanced paint shop" until it reopens, or is it something only European clients will manage to get? We would love to listen to whatever you have to tell us about that.