What is the best charging plan if you want to keep your Tesla battery healthy for years and years?

There are many different theories out there, and until we have someone that has driven a Tesla for decades, it will be hard to know the right answer. The automaker suggests keeping your battery somewhere between 50 and 90 percent charged as often as possible. More specifically, the company says to charge daily to 90 percent and then use 100 percent for long trips. Tesla CEO Elon Musk has said before that charging to 80 percent is better than charging to 90. 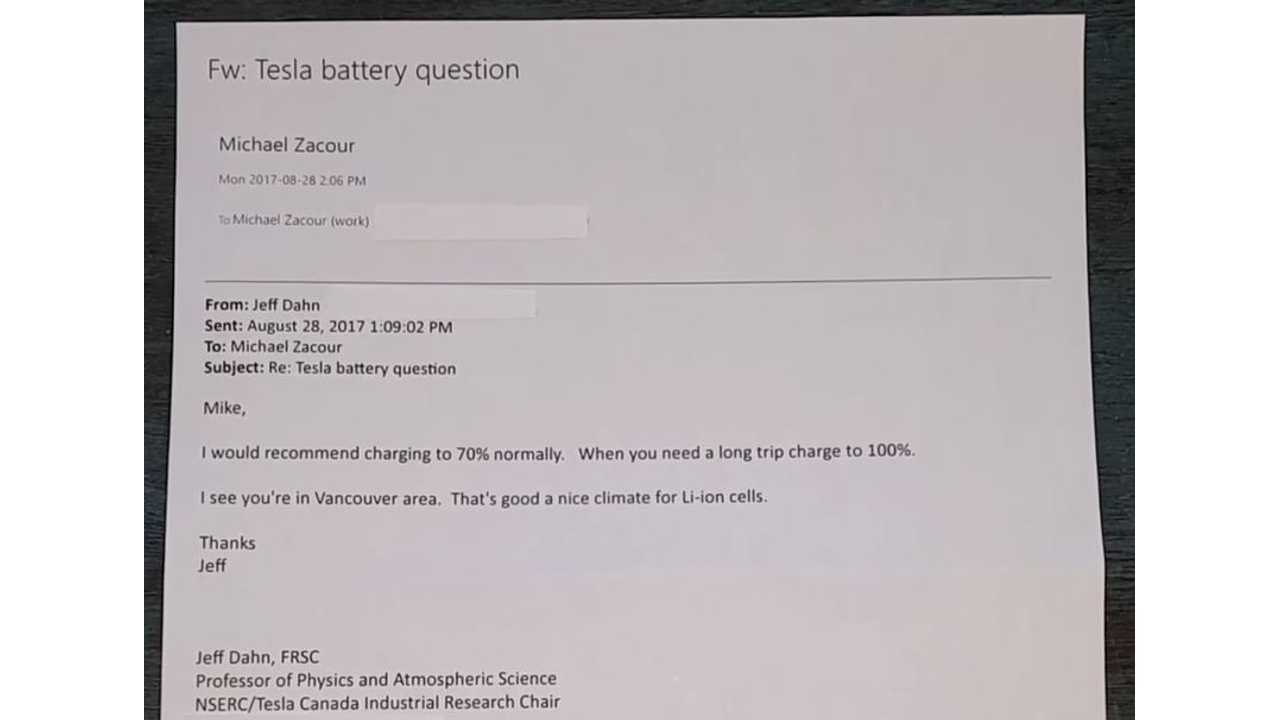 Who might be the best person to ask this question and get an answer that you can trust? As Michael (Freedom101) pointed out on the Tesla Motors Club forum and the above YouTube video, "Mr. Lithium-Ion Battery", Jeff Dahn is the man.

Dahn, Tesla Industrial Research Chair and Professor of Physics and Atmospheric Science at the University of Dalhousie in Nova Scotia, is one of the most renowned battery experts in the world. He has spent a majority of his career trying to answer this question. He told Michael:

So, it's that simple? Just set it and forget it. (You can set up a limit using the car's touchscreen or your Tesla mobile app)

We all have different driving habits, we live in different climates, and we commute different distances. Nonetheless, if you want to keep it simple, most of us know that we shouldn't fully charge unless there's no other option. Charging to 90 percent has been recommended often by many. Surely charging to 70 percent would be better, if 80 is better than 90.

Heck ... if you don't need the range, charge to 50 or 60 percent. Keep in mind, however, that you will begin to notice the affect on performance as you dip below 70 percent. Also, cycling around 50 percent is supposed to lead to the longest battery life.

Most people don't have a daily round trip commute that requires some 100-150 miles, so this 70 percent method should fare pretty well for the masses.

Jeff Dahn has won countless award for his work on batteries.

His talk highlights some of his research experience. Dahn has received National and International awards including: International Battery Materials Association (IBA) Research Award (1995); Herz- berg Medal, Canadian Association of Physicists (awarded to a physicist under 40 years old for career achievement - 1996); Battery Division Research Award (The Electrochemical Society - 1996); Fellow of the Royal Society of Canada (2001); The Electrochemical Award (2006); Medal for Excellence in Teaching (2009) from the Canadian Assoc. of Physicists and the “Technology Award” from the ECS Battery Division in 2011. This talk was given at a TEDx event using the TED conference format but independently organized by a local community.