BYD Plug-In Electric Car Sales Up In China To Over 5,500 In September 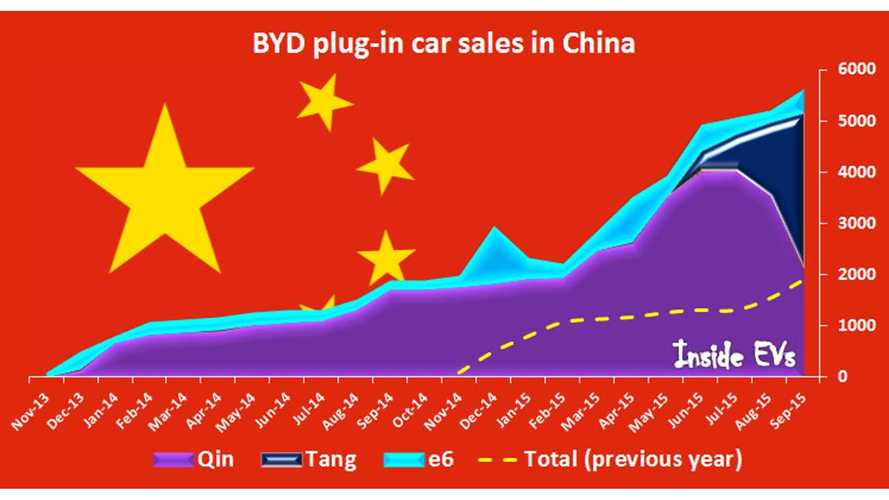 September was another month of growing plug-in electric car sales for BYD.

A total of 5,749 were delivered (compared to 1,895 one year ago), as the plug-in hybrid Tang SUV overtook Qin in the rankings.

Whether consumers prefer Tang over Qin, or if BYD needed to switch to more battery output for the Tang is the open question. Prior to the Tang launch, Qin was growing every month. In September, the company used at least 110 MWh (new record for car division).

BYD Song, which we hoped for, turns out to be a gasoline model at the moment. Plug-in version of Song will be launched in the first quarter of 2016.

"Similarly to the PHEV Tang, launched by BYD in June 2015, the PHEV version of the Song will be the second hybrid to rely on the BYD "542" strategy for PHEVs that define the company’s technological proposition, and will feature in all of its future PHEV models, in which “5” means the vehicle’s power to reach 100km/h within 5 seconds, “4” meaning all-time electric four-wheel drive, and “2” for its fuel efficiency of 100km with less than 2 liters of gasoline. Most importantly, and just like the Tang, the Song is equipped with VTOL (vehicle to load) capacity, which literally turns the vehicle into a mobile energy storage station, which enables the car to provide electricity to household applications like microwave ovens, electric stoves, refrigerators, cellphones and laptops. The VTOL technology is BYD’s initiative and is also very useful when one wants to cook a meal outdoors. "