A Peek Under the "Hood" of a Tesla Model S P85D 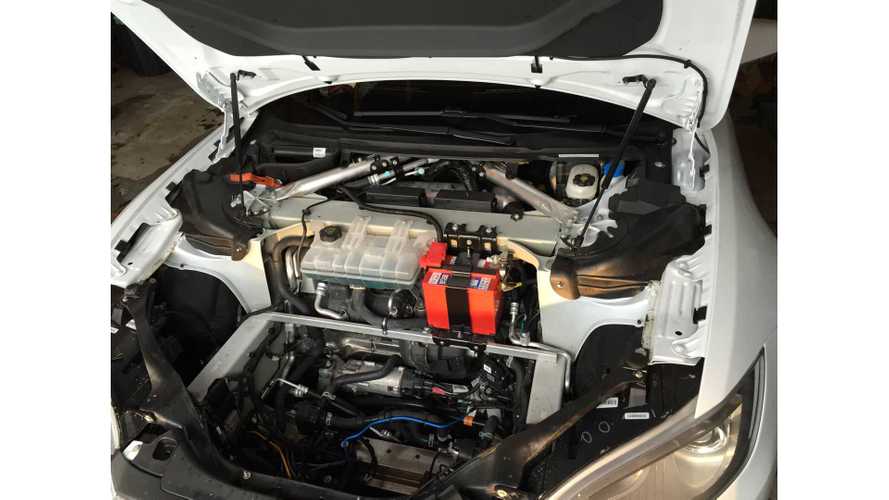 If you're like us, you're always peering into whatever open compartments of any car you see.  It's a little safer to do that at auto shows and such, but when you can do it via the internet?  Ideal.

Courtesy of Reddit user "EatMoarToads" (?), we have the shot above, posted on imgur, here.  Go ahead, click on it for the big one.  We'll wait.

The comments and discussions are kind of amusing, as is most of Reddit, but they all seem to focus on the orange, automotive-style deep-cycle 12V battery.  Like this:

- The fact that they moved the battery top center for the D chassis is pretty telling that they had no idea they'd be replacing these things every year on average. On the RWD platform it's hidden under all kinds of stuff. There's even a shortage of them. Mine popped the warning Monday and it goes in tomorrow for replacement. They couldn't get me in sooner because they didn't have one to give me. Presumably they have some in reserve for acute failures. - Can someone explain to me why this car even needs a 12V battery? Why not power everything from the traction battery? - Here's my four guesses. Some are better reasons than others. auto electronic components are commonly made for 12 volts. to act as a backup, For when the main pack is either disconnected or charging. to prevent accessories from continuing to drain the traction pack. To keep dangerous power levels further away from the occupants of the vehicle.

Of interest, though, is a comparison photo posted of a non-dual motor car:

Really, all we're seeing in the dual-motor car is the 12V battery (for whatever reason) and the windshield-washer reservoir. This led us on a quest to find out what all that other plumbing-looking stuff was, in both of the photos.  Then we found this video:

So, okay - AC, some suspension controls and reservoirs, braking stuff, the usual automotive systems.  Hold on for the rest of the car in the video, and you'll see the motor/inverter system on the rear.  Presumably, there's now one just like it in the front, requiring the displacement of aforementioned 12V battery.  And wishy-washy juice.

Gotta love those bracing struts that are as thick as your wrist, though...