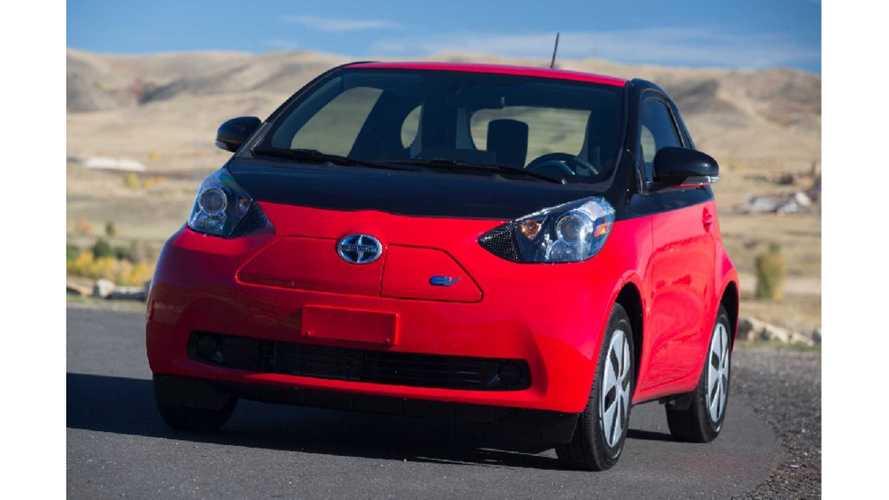 Every so often, we enjoy looking back at sales expectations versus the reality of sales today.

Our target today is the Scion iQ EV.

Back in 2010, Toyota had lofty sales expectations for the just-unveiled Scion iQ EV.  Toyota back then had claimed sales would be several thousand units per year.

The actual sales result is grim compared to what Toyota had targeted, with the automaker being almost wholly to blame.

Shortly after announcing that multi-thousand-unit sales target, Toyota went ahead with plans to essentially kill the iQ EV by making it lease-only and not available to the general public.

Essentially, the iQ EV became a fleet special, but only for select, hand-chosen fleets.  As a result, sales today in the US barely top 70 units cumulatively.  Approximately 20 more will be leased in the coming months, bringing the grand US total to 90 units.

Globally, sales of the iQ EV are equal to US sales plus 1.  That plus 1 is in use in Toyota City, Japan.

It's Toyota's belief that pure electric vehicles don't offer the range that its customers are looking for, which is especially true of the Scion iQ EV (the lowest range EV on the market).  Of course, Toyota could solve this "issue" by fitting an electric vehicle with a large battery pack, but rather than do that, Toyota sees in its future the fuel cell electric vehicle.  Hence the reason why both the Toyota RAV4 EV and Scion iQ EV must die off soon.

As we previously wrote:

"It is clear that Toyota is attempting to recover some of the cost of research and development on this car, while also ensuring that it is not received in a manner that makes this car desirable enough for the public to pressure them to put the iQ into mass production."

Ain't that the truth.  Was then...still is now.