Hyundai Ioniq 5 Gets Official EPA Range Rating: Up To 303 Miles

Up to over 300 miles on a single charge confirmed, but what is the "Standard Range" version doing on the list?

The U.S. Environmental Protection Agency (EPA) has just released range and efficiency ratings for three versions of the Hyundai Ioniq 5.

Before we move to the numbers - one of the biggest surprises to us is that the list includes not only the "Long Range" RWD and AWD versions, but also a "Standard Range" RWD version, which was not supposed to be offered in the U.S.

Unlike Europe (where multiple versions with 58.2 kWh and 72.6 kWh batteries are offered), and in Canada (see the recent info here), in the U.S. only the 77.4 kWh battery versions of the car were announced.

Nonetheless, the presence of the "Standard Range" does not necessarily mean that we will see it launched in the U.S.

The bigger battery of the Long Range RWD version increases the range to 303 miles (488 km), which means that the car meets the announced 300 miles of range.

We assume that all those numbers are for the 19" wheels - standard for the regular versions. 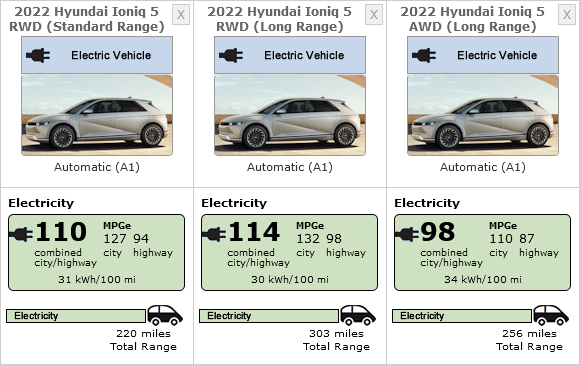 A brief look at the efficiency reveals deent numbers, slightly better than the Volkswagen ID.4 and Ford Mustang Mach-E.

The Hyundai Ioniq 5 LR RWD is expected to use 296 Wh/mi (184 Wh/km), including charging losses, according to the EPA combined cycle. It's actually in Chevrolet Bolt EUV territory.

We will get more into that later.

General summary of the basic specs of the Hyundai Ioniq 5: