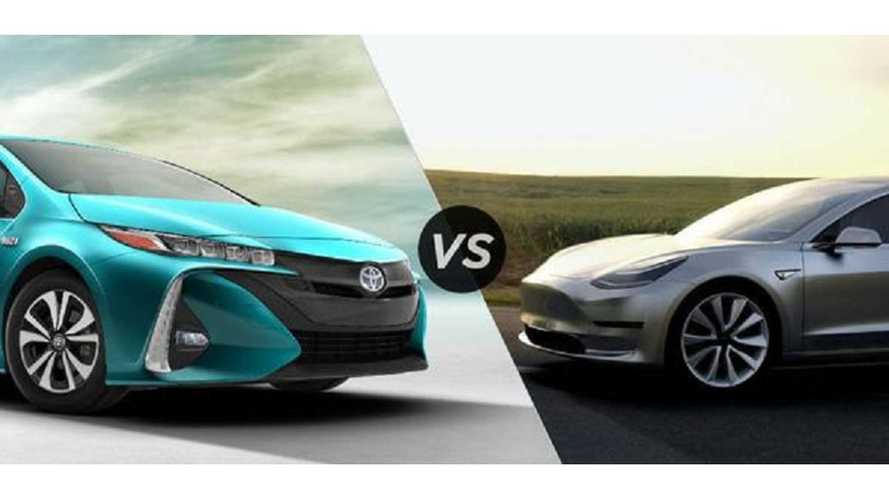 As global automakers are dragged kicking and screaming into the electric future, there seem to be no limits to the sophistry, lame excuses and misinformation they employ to justify their reluctance to get serious about selling electric vehicles.

Especially ironic is the position of Toyota. The company’s wildly successful Prius hybrid set the stage for the electric revolution, and the latest version, the plug-in hybrid Prius Prime, is currently a top-selling plug-in vehicle in the US. However, not only has the company shown little interest in taking the next step and producing an all-electric vehicle, it has publicly scorned and ridiculed those who do (at least 10 automakers are currently selling pure EVs in the US alone). A 2014 online ad campaign and a series of TV commercials for Lexus, as well as a more recent one for the Corolla Hybrid (which Electrek called “shameful” and a bad sign for Toyota’s future), have made highly misleading assertions to claim that hybrids are superior to EVs.

This corporate behavior is not only mean-spirited and counter-productive, it seems self-destructive, in light of the fact that Toyota’s hybrids have themselves been frequent targets of misinformation - for years, Luddites have been spreading false rumors that Prius batteries die after a few years, consigning the cars to the junkyard.

Meanwhile, according to Electrek, in yet another attempt to distance themselves from EVs and push the industry to make hybrid vehicles, Toyota has announced it's providing “nearly 24,000 licenses royalty-free” for its patents regarding electric components and systems to companies producing hybrid vehicles. Electrek's Fred Lambert comments, "I see what you are doing here Toyota and honestly, it won’t work."

Toyota seems to be running scared. Sales of its Prius are plummeting, for reasons that, so far, no one has been able to explain. The Tesla Model 3 is part of Toyota’s problem - the Prius is the number-one model buyers have been trading in to buy Model 3s. In January, Toyota Motor North America CEO Jim Lentz admitted that Model 3 is having an impact on Prius sales. “ is creating an entirely new segment of vehicles,” he said at the 2019 Automotive News World Congress (as reported by Wards Auto, via Electrek). He also acknowledged that the company’s push for hydrogen “fool cell” vehicles is going nowhere (in four years, the Toyota Mirai has sold about 4,800 units). Lentz conceded that the Mirai sedan was “maybe not the best place to start,” and said that Toyota would now focus on fuel cell-powered heavy-duty trucks. Meanwhile, over in the luxury sedan segment, Model S has been outselling competing Lexus models since 2013.

Above: A tongue-in-cheek look at the situation at Toyota (Reddit: eurokeitai)

So, is Toyota going to cut its losses and redirect a substantial portion of its massive resources to electric vehicles? Nope. Over the past year or two, the company has made some vague promises about pure EV models to come, most of them apparently for the Chinese market, but that’s about it. At the recent Geneva International Motor Show, Gerald Killmann, Toyota’s VP of R&D for Europe, made a ludicrously sophist argument that producing hybrids actually delivers more emissions reductions than would producing EVs (as reported by Car and Driver, and eloquently elaborated upon by Ben Jervey in the Desmog Blog).

Using math fuzzier than a Persian kitten, Killmann explained that Toyota is able to produce only a limited number of batteries each year - enough for 28,000 EVs or 1.5 million hybrids. These 1.5 million hybrids will reduce carbon emissions by a third more than 28,000 EVs would, so the company is actually having a more positive environmental impact than it would if it were selling EVs.

Killmann didn’t discuss the details of his carbon emissions calculations, so as Car and Driver put it, “it’s difficult to say whether the logic was created to explain away Toyota’s nonexistent EV offerings, or if it has been Toyota’s plan all along to take an unsexy, pragmatic approach to reducing new-vehicle carbon emissions.”

Mr. Killmann’s “logic” leaves a few questions unanswered, to say the least. First, why can’t Toyota increase its battery production capacity, as Daimler and Volkswagen are doing? After all, Tesla, which we believe has more limited financial resources than Toyota, was able to procure enough batteries to equip over 191,000 EVs in 2018, in the US alone (per InsideEVs). Second, as Ben Jervey points out, we can’t assume that every hybrid or EV sold is displacing a dinosaur-burner. Many new Toyota hybrids are replacing older Toyota hybrids, and it stands to reason that many current Prius drivers (including this writer) would be very interested in buying an all-electric Toyota. And finally, with hybrid sales sinking and sales of pure EVs soaring, what makes Toyota so sure it can hope to sell 1.5 million hybrids per year going forward?

“Ultimately, Toyota’s strategic decision to invest in gasoline-electric hybrids and bet on fuel cells in the long term is the reason that it isn’t currently producing any electric cars,” writes Ben Jervey. “The once-innovative company that mainstreamed hybrid-electric technology is now a global laggard in electrification, and is using dubious logic to justify its gas-powered fleet on environmental grounds.”

“By no reasonable measure is Toyota’s fleet more eco-friendly without a single all-electric model,” he continues. As numerous studies have confirmed, “Electric cars are cleaner and greener from cradle to grave, including battery production, and regardless of where they charge.”