EVs are gaining momentum across the globe, but with incentives drying up, Italy may see a break from exponential growth.

2021 saw continued growth in the nascent Italian EV market. Amid the tail end of the coronavirus pandemic, uncertain financial incentives and the ongoing global chip shortage, electric mobility confirmed a momentum that has been gaining strength across Europe and the world.

As the Italian car market scored a modest 5.8% recovery from 2020 – with less than 1.5 million registrations – traditional, non-electrified options lost traction in favour of modern alternatives. Petrol and diesel powertrains closed 2021 at 29.7% and 22.6% market share, respectively (from 37.5% and 33.1% in 2020), leaving the spoils to plugless hybrids, which in turn reached 29% and are now the leading powertrains in Italy’s monthly sales.

Plug-in options, while still lagging behind the levels recorded in some leading European markets, continued to break records. After a 2020 that was marked by a year-on-year (YoY) trebling of full-electric sales, to reach over 32,000 registrations, Unrae stats show the BEV market further doubled in 2021 to over 67,000 units. This could have been an even higher result, had it not been for all the issues the market faced through the year, but it nonetheless meant the BEV market reached 4.6% market share for the full 12 months (up from 2.3% a year before). 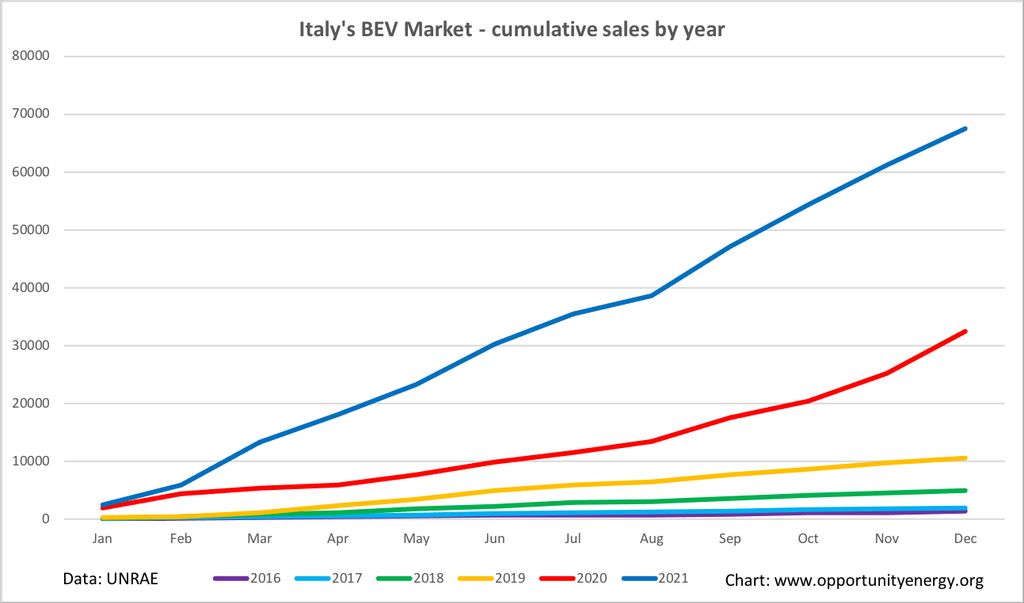 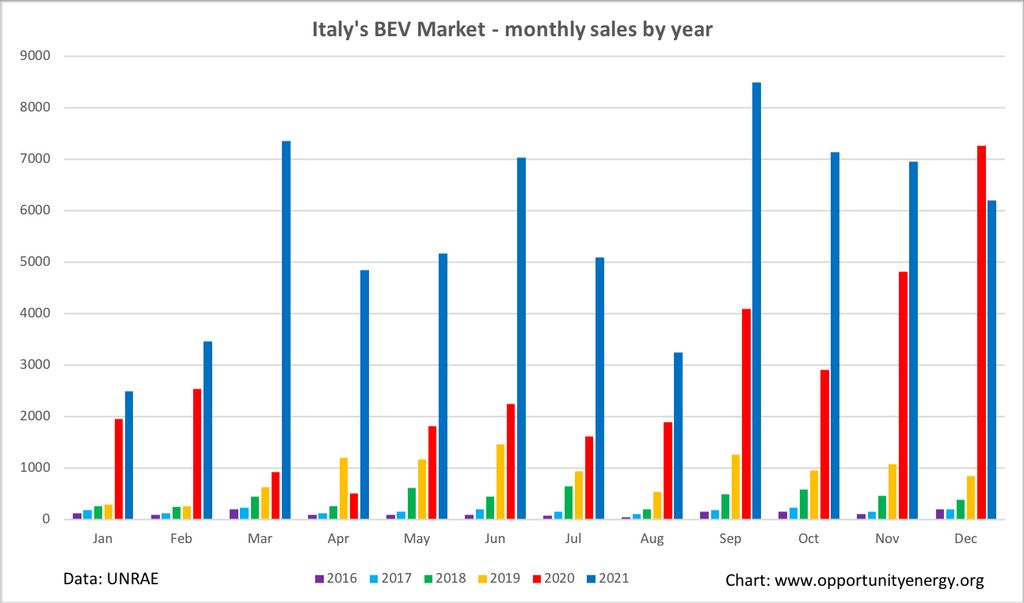 PHEVs faired even better than full electric models, reaching over 69,000 registrations and a 4.7% market share, for the first (and last?) time overtaking BEVs in overall share. This compared with just 27,000 units and a 2% market share in 2020, a major boost that was likely pushed in part by carmakers and by the market’s preference for transitional powertrains. We shall see whether the same dynamics hold true in 2022. The overall weight of plug-in powertrains thus reached 9.3% for the full year 2021, from 4.3% in 2020, for a total of almost 137,000 units.

What models were the winners and losers in the 2021 BEV race? The annual chart gives one clear winner and several runner-ups. 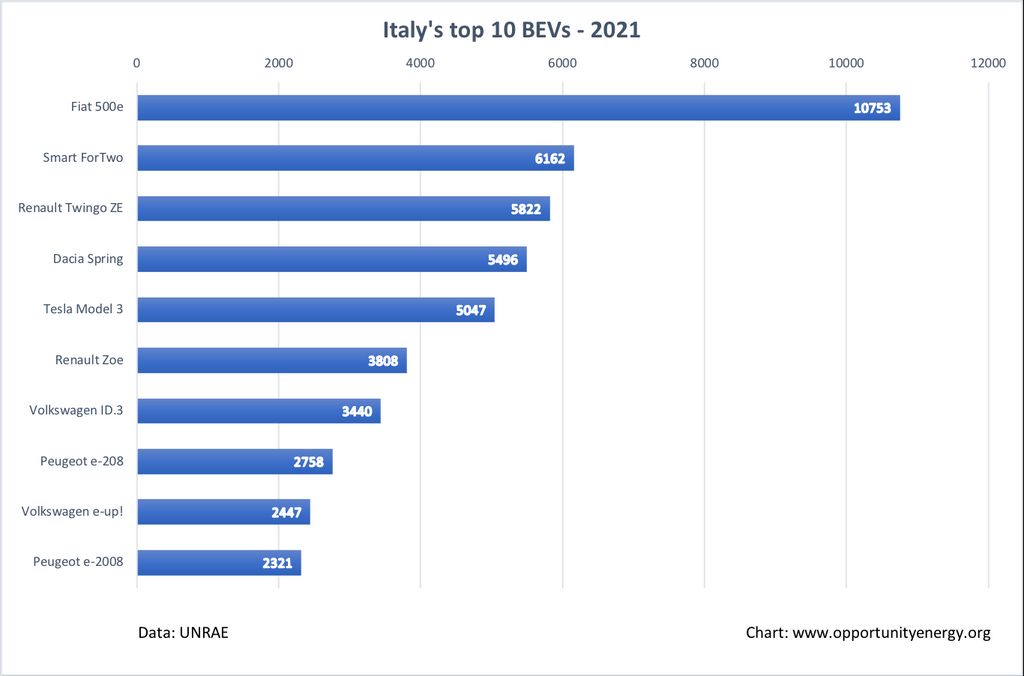 Fiat 500e was the unbeatable queen of the full-electric arena throughout the year. With eight top monthly spots and consistent results, it was the first BEV to ever exceed the 10,000 sales in a year in Italy. An obvious favourite in its domestic market, it faced stiff competition from cheaper alternatives in the A-segment, but won by a wide margin nonetheless. A very distant second was in fact the evergreen Smart ForTwo at 6,162 registrations, followed by the Renault Twingo ZE closing the podium with 5,822 units. The usual, clear domination of the Italian market by micro-cars was once again confirmed with this staple trio of top sellers.

Just out of the podium, Dacia Spring followed in the fourth position with 5,496 units, a great result considering that Italian deliveries only started in June and were inconsistent through the second half of the year due to limited supply in the face of great demand. 2022 will likely see much more of this Romanian mini in the top spots. Tesla Model 3 trailed the Spring in fifth place with 5,047 units, having missed its usual end-of-year push in December (which instead happened elsewhere in Europe) that could have pushed it all the way to the podium. A great result nonetheless in a market not so keen on large and expensive models. 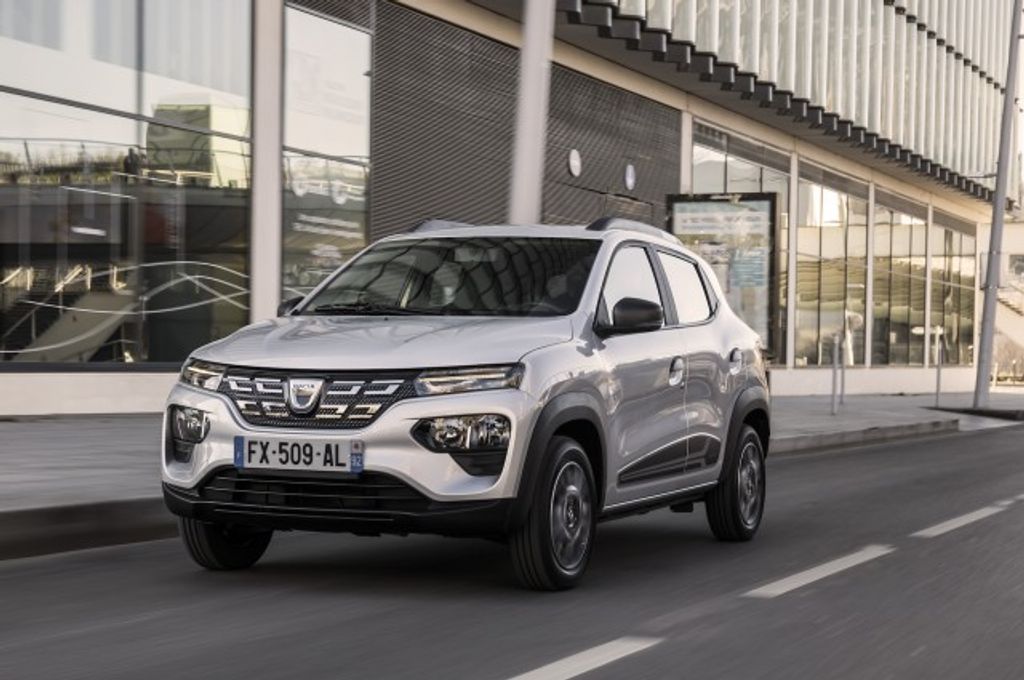 Two important models followed in sixth and seventh place, having lost their races to the top. The Renault Zoe, 2020′s BEV queen of Italy and Europe, only scored 3,808 registrations, likely the consequence of much-increased competition in its B-segment. Not far behind, VW ID.3 reached 3,440 units, an underwhelming result for a model with great potential even for the minicar-loving Italian market.

Whether slower sales were due to logistical reasons (ID.3 faired much better in the rest of Europe, where deliveries may have been focused) or little love from the market will have to be confirmed in 2022, as VW surely will keep a close eye on this Trojan horse in its broader electrification strategy.

Three more lower-segment models completed the annual Top 10: Peugeot e-208, VW e-up! and Peugeot e-2008, confirming the market’s predilection for compact and affordable cars, an ongoing trend that is unlikely to change. Will it be the same story in 2022?

Many more full-electric models are now being released on a regular basis, but only the truly affordable ones could get sufficient traction in the Italian market to help it keep an upward trajectory (Dacia Spring being a perfect example). And even a relatively low price point will still need help from incentives, one of the main reasons why Italy’s market skyrocketed over the past two years, and the absence of which had immediate effects in this price-sensitive market as 2021 ended.

With financial incentives exhausted since mid-December, and yet to be renewed or replaced with a similar scheme, the Italian electric car market is bound to suffer an inevitable break from its exponential growth of recent years.

As the Italian government awkwardly rushes to patch up this interruption – a new scheme may be formally re-introduced in the near future – any forecast for 2022 cannot but involve a good dose of caution. Perhaps a pause in market growth will lead to similar electric car sales to last year, in complete disalignment with global EV growth. However, there is still hope that renewed, albeit lower, incentives will help support the ongoing expansion of electrified powertrains in the very tough arena that is Europe’s fourth-largest car market.