It Seems Big Auto May Be Betting On Flying Cars 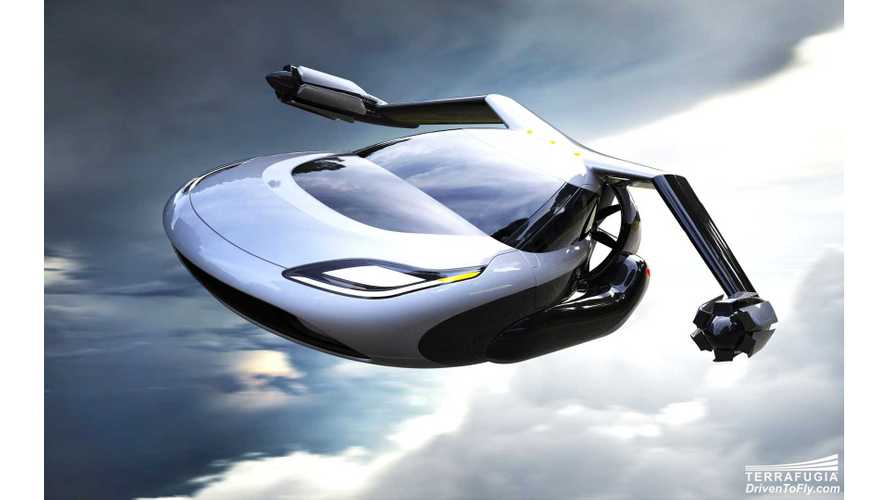 Should Big Auto invest in EVs or flying cars?

The 21st century is already two decades old. Dude, why do we still not have flying car? Pragmatic souls might reply that, since the heyday of 1950s science fiction, we’ve come to realize that flying cars aren’t particularly practical or particularly necessary, and that we might do better to solve the problems created by the earthbound variety before creating new frontiers for traffic jams and road rage.

Above: A vintage vision of a future with flying cars (Source: Messy Nessy)

However, pragmatism and practicality have never been humans’ strong suits, so it should come as no surprise that the dream of flying cars is still very much alive. In fact, a new study (published in Nature) funded by a group from Ford Motors’ Research and Innovation Center in Michigan argues that, in some applications, electric flying cars could actually be greener than electric “road cars” (a new retronym in the coining?).

Hugh Hunt discusses the new paper in The Conversation, and explains that the idea that a flying car could be more efficient than a road car isn’t as crazy as it sounds at first. Flying isn’t inherently inefficient. We all know that jet airliners consume vast amounts of energy (Hunt says a passenger jet can emit as much as 100 kg of CO₂ per passenger per hour). However, fewer may be aware of the amazing aerial accomplishments of birds - to cite just one example, every spring, millions of tiny songbirds fly directly across the Gulf of Mexico, remaining airborne for 30 hours or more, without eating a bite.

A four-passenger flying car would of course fall somewhere between these two extremes. Designers of FEVs (Flying Electric Vehicles - you read it here at EVANNEX first) study avian aerodynamics and optimize wings and propellers to deliver maximum lift for minimum drag, which translates to lower power consumption and lower emissions.

The FEVs examined by the new paper are vertical take-off and landing (VTOL) aircraft, although they are nothing like the Harrier Jump Jet, which has two movable jet engines that generate incredible amounts of thrust (and noise). Flying cars would be much smaller and lighter animals, driven by multiple tiny electric fans. As Hugh Hunt explains, this distributed electric propulsion (DEP) technology is the key to efficiency, as well as to quieter take-off and hovering.

According to the paper’s authors, for journeys of around 60 miles, FEVs could be up to 35% more efficient than ground-based gas-powered cars, although for obvious reasons (gravity’s a bitch, ‘tis said) they would still be less efficient than ordinary (road-traveling) EVs.

How much more efficient are EVs than internal combustion (ICE) vehicles? According to the US DOE’s Office of Energy Efficiency and Renewable Energy (via CleanTechnica), “EVs convert about 59%-62% of the electrical energy from the grid to power at the wheels. Conventional gasoline vehicles only convert about 17%-21% of the energy stored in gasoline to power at the wheels.” According to the Europe-based site Transport & Environment (via InsideEVs), considering the full vehicle life cycle (from production through use), EVs have an efficiency of 73%, whereas a typical ICE efficiency is 13%.

Here’s where the paper’s authors start to get creative. If you assume the same number of passengers, driving on a road is always going to be more efficient than driving up in the air. However, for purposes of the study, “The VTOL is assumed to have three passengers and one pilot (i.e., four occupants), as it will most likely be used in a transportation-as-a-service [TaaS] business model where service providers seek to maximize utilization rates. Ground-based cars are assumed to be personally owned with a typical loading of 1.54 passengers/occupants.”

So, if you assume that every flying car is always going to fly with a full passenger load, and that every ground-bound car is always going to roll with just a person and a half (which also requires one to assume, among other things, that only flying cars will participate in the vaunted TaaS business model), then, say the paper’s authors, for a 100 km journey FEVs could generate 6% less emissions than POEVs (plain-old EVs).

Mr. Hunt notes that “the paper steers clear of a number of practicalities that must be considered before we embrace VTOL flying cars as a sustainable form of transport for the future.” Additional infrastructure required for flight may impose additional environmental costs, and aircraft are subject to strict regulations regarding maintenance and downtime, which could also offset emissions gains. Furthermore, weather is much more of an issue up in the air. “A tailwind of 35 mph reduces power use and emissions by 15%, but a 35 mph headwind increases them by 25%,” writes Hunt. Whereas a road car can simply pull over to the side if it runs out of charge, the flying variety might have to carry heavy extra batteries to avoid possible catastrophe.

The final objection to FEVs as an energy-saving technology noted by Mr. Hunt is that, whereas ground-based EVs are already on the roads, and proliferating as you read this, a commercial FEV is many years away, and the energy and environmental crises that we face are here today. So, while “these advanced DEP flying cars...could yet play a part in our fossil-fuel-free future,” they don’t sound like a significant tool for reducing emissions.

On the other hand, dude, if you still want your flying car, don’t despair. In the auto industry, glamour and fun always win out over practicality, and General Motors seems to be betting that its customers will be more excited about flying cars than about electric ones. At last November’s FT Future of the Car Summit in Detroit, GM execs were trash-talking Tesla and predicting that they would someday lead the EV industry (although they did not reveal any new plans for actual EVs).

GM Vice President of Global Strategy Mike Abelson told the Detroit Free Press that GM had had conversations with air taxi companies about using its autonomous and electric vehicle technology to create flying cars. “There will be some sort of air transport that will get integrated with this AV/EV technology,” said he.

Wouldn’t an electric pickup truck be more useful? Apparently not. “GM’s gasoline-powered cars and trucks will be the main revenue stream for the company for at least the next two decades,” said Abelson. “There will not be any AV/EV pickups.”

We’ll see. Abelson’s boss, CEO Mary Barra, told Harvard students in September that GM had given a “tiny bit” of thought to producing an electric pickup someday. GM competitor Ford has given it a little more thought - the company recently announced an investment of $500 million in startup electric pickup-maker Rivian, along with plans to jointly develop a new Ford EV.