Has the Tesla Model S Plaid met its match?

There aren’t that many people in the world who own both a Tesla Model S Plaid and a Ferrari SF90 Stradale—both painted red, mind you.

DragTimes’ Brooks Weisblat is one of them, and the Italian plug-in hybrid supercar is the most recent addition to his garage. We’ve already seen him drive the SF90 Stradale exclusively in EV Mode, which gives it 162 kW (217 hp) of power from three electric motors.

While that was a really interesting video, the thing everyone was waiting for is a drag race against the Tesla Model S Plaid. That is exactly what the video above gives us, pitting Maranello’s 1,000-PS (986-hp) supercar against Palo Alto’s (or rather Austin’s) finest, the 1,020-hp Tesla Model S Plaid.

This duel consisting of five races (best three out of five) will keep you glued to your screens; yes, it’s that close. Now, let’s take a look at other relevant specs of each car.

The Ferrari SF90 Stradale has a complex powertrain consisting of a mid-mounted 4.0-liter twin-turbo V8 engine making 780 PS (769 hp) on its own, assisted by three electric motors with a total output of 162 kW (217 hp). Two of them are located on the front axle for AWD capability, while the third is placed between the thermal engine and the 8-speed dual-clutch transmission on the rear axle.

While they look very close on paper, we should note the Ferrari is 1,283 lbs (582 kg) lighter than the Tesla, a huge advantage in drag racing. Then again, the tri-motor Tesla has the advantage of instant torque delivery—all 1,050 lb-ft (1,422 Nm) of it. Will the Model S Plaid’s drag strip dominance continue or will the SF90 Stradale end it? Place your bets now. 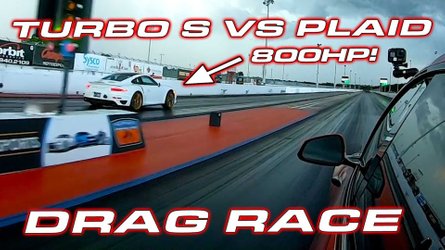 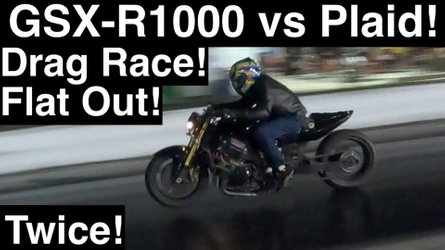