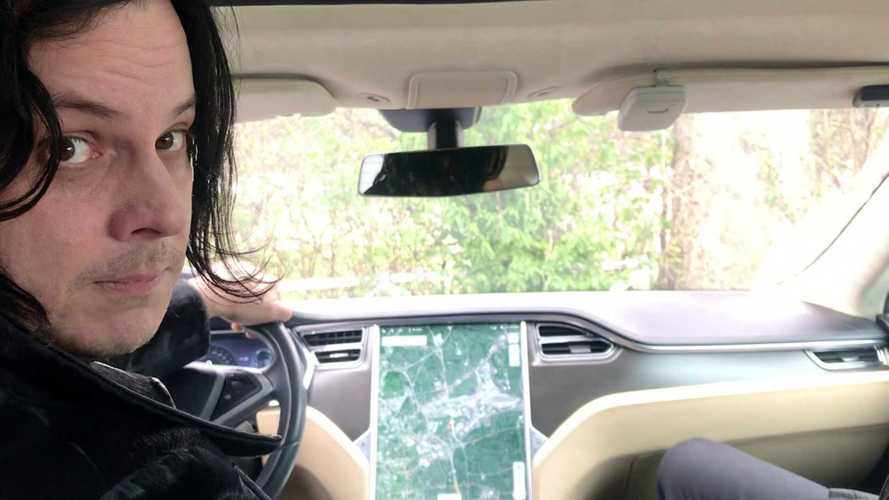 Rocker Jack White is a Tesla fan from way back - he’s a Model S owner and a self-described “huge fanatic and supporter of everything Tesla has been doing since day one.”

In 2016 White’s record label Third Man Records posted a photo of him hanging out with Elon Musk, and last August, White played a free concert for Tesla employees at the Fremont factory.

The Grammy-winning White is revered not only as a songwriter and guitarist, but as a record producer who’s not afraid to push the envelope. He's honed his craft since his early days in The White Stripes. Now, as part of The Raconteurs, he seems to have found a way to use his Model S as an audio engineering tool.

Above: Jack White and his Tesla Model S (Tumblr: captainblonde13)

Every audio engineer knows that it’s important for a recording to sound good in a car, because that’s where a lot of people will be listening. Savvy studio cats check their mixes on reference speakers that simulate the sound of a car stereo. However, Jack White has found a way to listen to his creations on a real automotive sound system (and not just any sound system) during the actual mixing process.

He used this technique on a new recording project, which he’s currently mixing with Vance Powell at Sputnik Sound. As White explains in the video, he uses a mini FM transmitter to broadcast the mix from inside the studio, and he and the band can listen to it on the radio in his Model S out in the parking lot.

Above: Jack White shows his technique for doing mixes (Youtube: The Raconteurs)

“The band uses a walkie talkie to give notes on the mix to the engineer (Vance) back in the control room,” write the Raconteurs on Instagram. “This way the artist can mix in real time, and hear exactly what the song sounds like on the radio as well, this time through the amazing sound system of a Tesla Model S. This speeds up the process of mixing greatly and reduces the amount of remixes that occur after artists feel they’ve ‘got it’ in the studio, only to listen in the car on the ride home realizing that the kick drum is too loud!”

=== *As a bonus, we've thrown in two songs below which may have benefitted from the Tesla treatment. Enjoy!