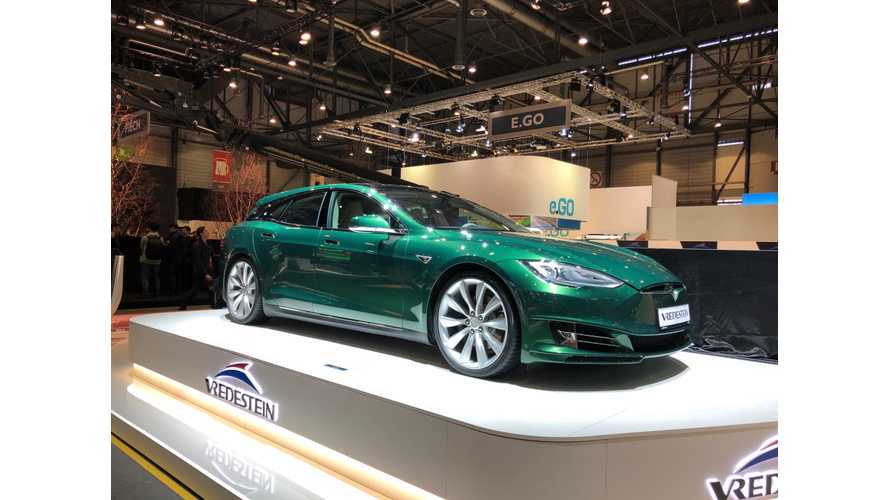 Once again, we get a look at the Tesla Model S shooting brake.

Just a few weeks ago, we learned that the Tesla Model S shooting brake (or station wagon), designed by London-based Niels van Roij would be making its way to the 2019 Geneva Motor Show. Well, it has arrived in all its metallic green glory. Interestingly, however, RemetzCar was supposed to build some 20 or so of these variants, but those plans are no longer a reality.

Since the initial plans, the company has closed its doors. This means that in order for multiple copies to take form, designer van Roij needs a coach builder. At any rate, the finished product is on display for all eyes to view in Switzerland.

Tesla Model S Shooting Brake - What's It Like Inside & To Drive?

Perhaps showcasing the unique variant in Geneva is a way to get prospective manufacturers or wealthy car collectors with investment pursuits to bite? We really have no way of knowing what the future plans may be. Nonetheless, we still find this project pretty incredible in more ways than one.

As you may remember, the design employed modifications to the rear half of the car, though the front half and powertrain remain consistent with the Model S in its traditional form. Check out the latest live images below.

THIS IS THE BEAUTIFUL DUTCH ELECTRIC SHOOTING BRAKE

Dutch RemetzCar revealed their full electric custom built shooting brake today. Based on the Tesla Model S, the shooting brake was commissioned by Dutch collectioneur Floris de Raadt, who is an avid fan of shooting brakes and has owned several one-of-a-kind shooting brakes. Mr. de Raadt is also an early adopter of full electric driving since 2008. RemetzCar earlier developed the exclusive Tesla Model S Hearse, building upon their extensive experience converting cars with and aluminium structure and body, like the Audi A8. Dutch designer Niels van Roij, who runs an independent automotive design firm in the United Kingdom was responsible for the Shooting Brake design. The project was supported by Dutch premium tyre manufacturer Vredestein.

RemetzCar’s craftsmen translated the Niels van Roij Design sketches into the actual car, leaving the full core structure of the car as well as the crumple zones intact. RemetzCar also a developed a completely new tailgate, featuring a rear spoiler with hidden rear window wiper and brake light. To give the car an even more bold stance also from a front view, Niels van Roij Design added a chrome trim that runs from the A-pillars all the way along the roofline and around the panoramic roof. Finally, the team developed a unique colour, based on De Raadt’s wishes. The green metallic with a twist of gold gives the Model SB an elegant yet striking appearance.

Right after the reveal, the owner will make a tour through various countries in Europe, showing the car to prospects and media outlets. It will have its public premiere at the International Concours d’Élégance Paleis Het Loo, held from 29 June to 1 July 2018 in Apeldoorn, The Netherlands.