After Doug DeMuro raved about the GMC Hummer EV and called it ahead of all rivals like the Tesla Cybertruck, Tesla fans spoke out. In the end, it really doesn't matter. If both of these electric pickup trucks come to market in compelling form, joined by the Rivian R1T, it will be a monumental step forward for EVs as a whole. The fact that they'll likely appeal to different audiences is honestly a good thing.

It actually all started way back in December of 2019, when hugely popular video car reviewer Doug DeMuro made it known that he's not a fan of the Tesla Cybertruck. Of course, he's entitled to his opinion, and even after much contention from Tesla fans, he doubled down on his thoughts.

More recently, DeMuro praised the GMC Hummer EV, and went so far as to say he thinks it's not only the future electric pickup truck to beat, but also further along in development than the Tesla Cybertruck and Rivian R1T.

Tesla fans and others were quick to remind DeMuro that the Hummer EV doesn't exist as a fully functional prototype, but instead mostly just CGI video. Later, we learned that there is a slowly moving display model that appears to be plugged into the wall. Our friend Sean Mitchell put out the following video on October 30, just a day after DeMuro's first Hummer EV video review:

Engineering Explained posted an interesting comment below Mitchell's video. Channel host Jason Fenske was one of the first to get his hands on the Hummer EV display model to check out and review. He explained:

"The display model drives, if that's what you were curious about! I watched it drive off and load up into a truck after I filmed it. I have video of this as well, but there's also others who have already filmed it driving and posted on YT. The cord, as you mention, is quite typical of any showcase car (the car sat around for days with folks filming/photographing/etc). As it's a display model, I highly doubt they'd put a full battery pack in it.

The timeline is fast for the first truck (next year), but overall the timeline is pretty slow (one new model each year until 2024). I don't think it requires all that much suspicion considering there's the Volt, the Spark EV, and the Bolt."

It's important to point out that Mitchell also put together his own Tesla Cybertruck versus GMC Hummer EV video, but it was published about a week prior to the whole DeMuro situation, so it's unrelated but still helpful in this discussion:

Clearly, DeMuro may not be happy with the fact that Tesla fans have come after him and his opinion. Otherwise, he may not have engaged on social media and then released a second video addressing the group of "enraged" Cybertruck lovers. We have no way of knowing for sure, though. DeMuro could just be wisely taking advantage of the developments to provide more popular content. 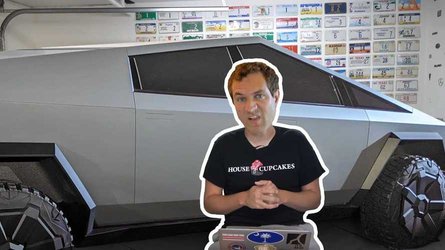 Doug DeMuro Doubles Down On Tesla Cybertruck After Rebuttals
⠀ 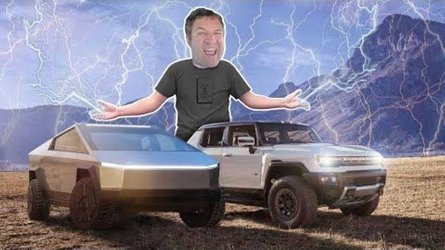 The crazy part here is the story just keeps growing. As you can see in the video at the top of the page, the Cybertruck Truck Guy made a video in an attempt to debunk DeMuro, and he even used DeMuro's name in the title, outright calling him "wrong." He's not the only one either. Prior to that video, there were others with similar "DeMuro is wrong" titles. We've included another example below, which comes from YouTuber Sam Alexander.

We're not taking sides here. In fact, we can only hope the Tesla Cybertruck, GMC Hummer EV, and Rivian R1T all come to market on time, or even ahead of schedule, as compelling electric pickup trucks. It would be fantastic for the segment and for EV adoption.

With that said, we'll leave it to our audience to talk this all out in the comment section below. Hopefully, we can all agree that any upcoming electric pickup truck is better than no electric pickup truck. These rivals may all appeal to different people, and that's just fine. Perhaps EV fans should spend more time being excited about upcoming EVs as a whole than battling about which unreleased upcoming vehicle is best. Eh, sadly, conflict gets peoples' attention.