Mercedes EQC Road Test On The Streets Of Frankfurt 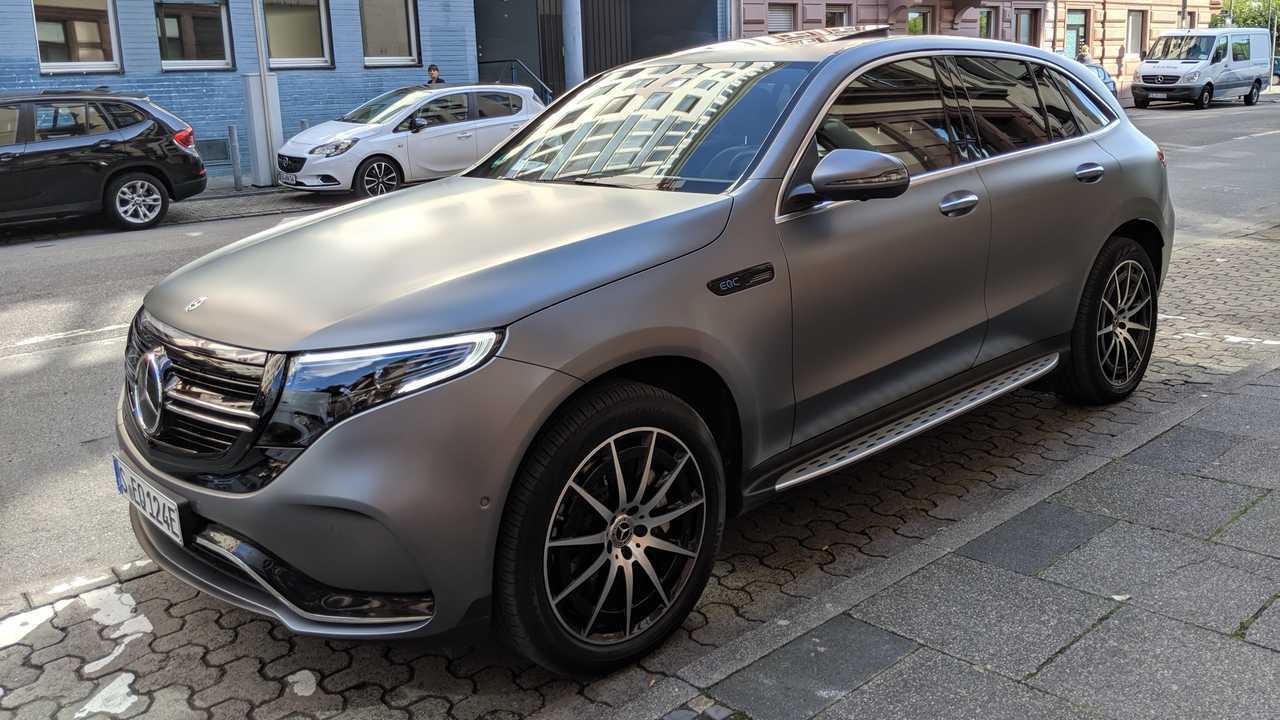 Solid and silent, but is it a proper EV?

The crown jewel of the Mercedes display here at the Frankfurt Motor Show is the world premiere of the EQS concept electric sedan. However, nobody is getting any seat time in that one-of-a-kind show car; in fact, we weren't even allowed to sit in it.

So we did the next best thing and secured an EQC 400 to take for a road test on the streets of Frankfurt.

Back in January at CES, I had the opportunity to ride in an EQC for a couple of hours in a pre-dawn drive to Red Rock Canyon. At the time, Mercedes wasn't allowing journalists to drive the EQC at, therefore I was only a passenger.

Mercedes-Benz EQC Is As Quiet As Audi e-tron, If Not Quieter

This time would be different now that the EQC is in production, and Mercedes has a supply of them for press events. There was a key for an EQC 400 waiting for me at the Mercedes front desk, as well as a map of the route around the streets of Frankfurt that Mercedes asked us to stay on (or at least close to). Other than that, we could do what we wanted to, and test out the car as we wished.

The interior of the EQC is typical Mercedes.

The first thing you realize is the EQC is all Mercedes. It's clear that the goal was to make their customer's transition from ICE to electric as seamless as possible. There's really very little about the vehicle that would indicate it's an EV. Other than the solid front grill, and the lack of a tailpipe, this could just as well be another version of the similar petrol-powered GLC crossover. The interior is plush, comfortable and elegant, as most Mercedes are. The front seats are very comfortable and nicely supportive. The Mercedes MBUX infotainment system is easy to navigate and relatively intuitive, once you play with it for a bit.

The first thing I noticed was how quiet the EQC is. Of course, all EVs are quiet by design, but some are quieter than others, and the EQC is probably the quietest EV on the market today. I say probably, because I wasn't able to test it at highway speeds, as all of my driving was around the city of Frankfurt at lower speeds. I was able to get a couple of sections of open straight roadway to punch the go-pedal and see how the acceleration felt.

Surprisingly, the EQC I drive had a slight hesitation before launching forward under full throttle. It wasn't much, perhaps 1/10th of a second, but enough for me to notice. It didn't have that instant launch that I'm used to with my Tesla Model 3 or BMW i3s. However, it was minor, and once the power from the dual asynchronous 150-kW motors (408 hp and 564 lb-ft torque) kicked in, the EQC takes off like all heck. It's may not be ready for the dragstrip, but I believe it's more than powerful enough to satisfy the nearly all potential EQC owners. Mercedes quotes the EQC's 0-60 time of 4.9 seconds.

The EQC is not a dedicated-platform EV and shares many components with the C-Class and GLC line. However, you certainly can't tell that by driving it, so kudos to the Mercedes engineers that worked on the EQC. First off, the ride quality is excellent. The EQC handled even on the bumpiest cobblestone streets with ease. Because of the city environment we were in, I wasn't able to really push the vehicle to its limits to test the handling characteristics.

However, back in January, I had the opportunity to take a long ride in an EQC with a Mercedes engineer doing the driving, and he was able to really show off the EQC's ability to carve up the turns of Red Rock Canyon outside of Las Vegas. The EQC is obviously set up for luxury and comfort over dynamic sports-car-like handling, but it can hold its own when called upon to offer some spirited driving.

There are four driving modes, plus an individual customized setting. The four standard modes are: Comfort, Sport, Eco and Max Range. The car always defaults to Comfort upon startup. In Sport mode the car offers the most dynamic performance, with more power available off the line and more direct steering response. In Eco, the car offers less power and is more efficient, and in Max Range, the vehicle will deliver the maximum possible range. Our Mercedes rep warned us that it's not fun driving in Max Range, but it will get the driver most range available. Individual mode allows the driver to personalize certain driving characteristics to their liking.

The regenerative braking has five different settings, adjusted by paddles on the steering wheel:

The EQC has an 80 kWh battery, which is the usable capacity, not the total. Mercedes won't reveal the total size of the battery, which would let us know how much reserve capacity is employed. The pack, the power electronics and drive motors are all liquid-cooled, and the vehicle also employs a heat-pump.

The EQC is equipped with a 32-amp onboard charger, which can provide up to 7.4 kW for AC charging. Personally, I'd prefer a 40-amp or 48-amp onboard charger for such a large battery, but the folks at Mercedes said they believe the charging capabilities were fine for an EV with an 80 kWh battery. As for DC Fast charging, the EQC will accept up to 110 kW, allowing the vehicle to charge from 10% to 80% in about 40 minutes. That's a little slower than most the EQC's main competitors can accept, and could be a handicap with sophisticated cross shoppers.

The EQC is rated for 259 miles on the WLTP, which should translate to about 230 miles on the EPA rating. However, my experience with the car seems to indicate it will be lower, perhaps around 210 to 215 miles per charge. I'm looking forward to seeing where the rating ends up.

I like the EQC a lot, and would probably choose it over an e-Tron if I were in the market for an SUV at the moment. I think the design is clean and nicely understated. The ride is excellent, and the cabin is much quieter and more isolated from outside noises than either of my EVs.

I do think the slight delay in acceleration would annoy me, though, and I'm curious if that is just an EQC trait, or if the particular vehicle I had had a problem. These press cars really get beat up, so it's not unreasonable to think it may have just been this car. I'll need to get behind the wheel of another EQC to see if it feels the same way.

It will be interesting to see how well the EQC sells. There's suddenly a lot of competition in this category, with the Audi e-Tron, Jaguar I-Pace, Tesla Model X there, and soon the BMW iX3 will be fighting for basically the same customers also. If Mercedes can keep the price down lower than the e-Tron, and perhaps offer competitive leasing rates, I think it can hold it's own.

It's definitely another good addition to the small to mid-sized electric SUV class, and a good first step in electrification for Mercedes. Before someone reminds me of the B-Class, yes I know all about it, but I really don't count that as anything more than a compliance EV from Mercedes. This is really the first serious all-electric vehicle from Stuttgart, and personally I think they are off to a good start.